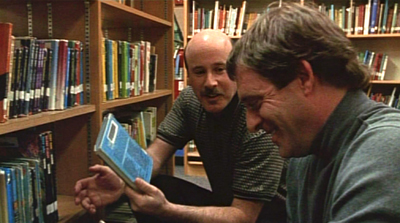 There are three things that I will not witness during my lifetime:

There are countless other examples of what my eyes do not expect to see before I shuffle off this pit, but the third entry, despite the odds, is the least likely of all. Documentaries are, on the whole, despised by a vast majority of Americans, for reasons that can only be attributed to their hatred of anything resembling school. As ignorant ass holes, these cretins assume that if it’s non-fiction, it will be boring, too cerebral, and lacking an adequate number of car chases and half-naked women. So, when presented with a choice between the latest monstrosity starring Ben Affleck and J Lo and a richly textured, transporting documentary about bibliophiles, the choice for most is not only obvious, it is as much a sure thing as Senator Rick Santorum’s latent homosexuality (for those who miss this reference, read the fucking newspaper once in awhile). Stone Reader, for me the best film so far this year, is so wonderful, so original, and so outside the mainstream, that it will certainly fade from view the moment I finish typing this sentence.

Directed by and “starring” Mark Moskowitz, Stone Reader involves a man (Moskowitz) and his search for an obscure author by the name of Dow Mossman, who wrote the equally obscure The Stones of Summer. Mark remembers being influenced by the book as a young man, although he didn’t read it fully until recently. Mark wonders what happened to the man who wrote such a wonderful book, only to fade away and never be heard from again. The journey takes Moskowitz to publishing houses, libraries, college campuses, isolated Maine retreats, and bookstores across the country. He even tracks down the author of the one review written at the time of the book’s release. Driving Mark’s quest involves a burning desire to understand why a great author would quit after one book, but there is also an underlying need to connect with “fellow travelers” – people who immerse themselves in the written word not only for a living, but as a life-affirming obsession. Mark never wavers from his journey to find the elusive Mossman, but along the way we are privileged to hear literate, adult conversations about the books and authors that make this otherwise dreary world worth waking up to. 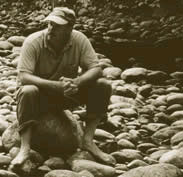 Fine, my dear LOTR geeks and sub-mental beasts, Stone Reader does not feature oral sex, nor does it takes flights of fancy into orgies of smashing metal and eruptions of flame. There are no hip-hop interludes, pseudo-clever exchanges of banter, and heads remain firmly attached to their bodies of origin. Still, a new and different world is explored in this film, one where articulate speech wins out over guttural noises and unrecognizable gibberish. The idea that a Saturday could be spent in the company of people who put pen to paper for reasons other than to pay off bail bondsmen is foreign to most Americans, I’m sure, but I did not want to leave the theater. Complete sentences! Pages being turned with loving care rather than ripped from spines and converted into spitballs! A love of language without accusations of pretension and “acting white!” While sitting absorbed in this film for nearly two hours, I could understand what people might be doing as they escape into the Matrix or Frodoland (or whatever the place is called; I haven’t seen the goddamn film). While my escape is worldly to be sure and theirs is, well, absurd and nerdish, there is a connection in terms of why each of us enters a dark theater.

Moskowitz eventually meets up with Mossman and while the discovery is invigorating, it is a bit sad as we discover what really happens to creative minds who can’t secure instant popularity. Mossman is, quite frankly, a bit nutty and we understand why he hasn’t been heard from since the 1970s. It is clear that Mossman poured his heart and soul into his first book, and simply lacked the strength to produce any more. Perhaps one grand statement was all he had in him to begin with. Mossman continued to write, but never again submitted a draft for publication. Mossman’s story, then, is all-too-typical of those who fail to achieve commercial success. Of course, all of this assumes that Mossman’s book is worth reading. Of this I cannot be certain (I haven’t read it). And yet, this film is not an examination of the worthiness of The Stones of Summer (it could very well suck), but instead one man’s consideration of the very essence of reading. Why do we do read? What do our literary choices say about our character? Does language have the power to change lives? Will I ever ask these questions of those who inhabit the vast wasteland between New York and California?