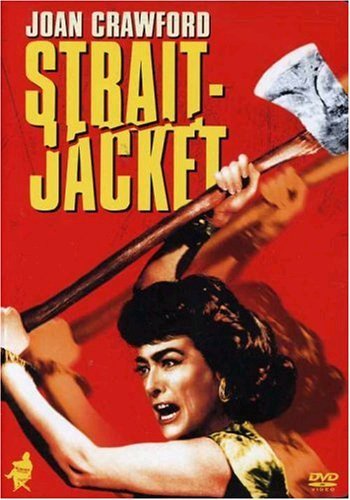 Ive been selecting so many classic films lately, that I thought it fitting to make a change and endorse one of the greatest camp classics of modern times–William Castles Strait-Jacket. Starring unmatched ham-bone Joan Crawford, Strait-Jacket is a non-stop thrill ride of unintentional hilarity, cheap effects, and a conclusion so ridiculous that its impossible not to roar with delight. Crawford, at the time of filming a ripe 60 years of age, asks us to believe that shes 29, that is before she takes an axe to her cheating husband (played by Lee Majors!) and his cheap lover. She then returns to the fold after two decades in a mental hospital, and then asks us to believe that shes still only 49; surely a leap of faith no one should ever be required to take in ones lifetime. Again, the opening scene–from stepping off the train looking like an aging drag queen, to the murders themselves (where she wields her weapon with the relish of a woman possessed) is so appalling that it must be seen by anyone who values cheap, tawdry, indefensible cinema.

Because the screenplay was penned by one Robert Bloch (Psycho), we know that when people start dying, it isnt really Joan, but rather her fucked up daughter, who just happened to witness the original killings twenty years before. Still, it was fun to watch the young girl (played by Diane Baker) wear a Joan Crawford mask and put the blade to no less than three people in the course of the film. The best murder involved George Kennedy (playing a dim-witted farmhand, what else?), who is magically transformed into the least convincing wax dummy ever constructed mere seconds before losing his head. It was also fun to learn that the role of Joans psychiatrist was played by the then V.P. of Pepsi, who got the job solely because Ms. Joan ruled the set with an iron fist (and wanted publicity for her late husband’s company). Apparently, rewarding good friends meant more than competence, which would explain the wooden performance by the Doc.

In a movie full of great moments, one of the best had to be Joans breakdown (uh, actually her fifth–but most memorable–of the film), where she comes clean about her past to the bitchy mother of her daughters boyfriend: It was an asylum! And it was twenty years of hell! It was HELL! At one point, I wasnt sure my speakers could take such blind rage. Couple that with the image of Granny Crawford shamelessly flirting with that same boyfriend–a young man at least 35 years her junior–and you have a film that, while creepy and dirty enough to force a post-screening shower, will entertain you as thoroughly as any other film in the DVD Club library.