My short, happy flirtation with the “blaxploitation” genre has come to an unexpected end, thanks to the incoherence of 1972’s Superfly. Whereas Coffy had me roaring with delight at the bloodthirsty manner of one Pam Grier, Superfly was more obviously cautionary, even as it romanticized a ruthless cocaine dealer. Youngblood Priest (Ron O’Neal) is the dealer in question, and his snappy dress and defiant sideburns certainly place him in the ranks of the decade’s top icons, but the surrounding film is a dull slog through stylized repetition. That said, Curtis Mayfield’s score is among the best of the genre, including the unforgettable “Pusher Man.” The film also uses still photography, high- and wide-angle shots, and flashy editing to cover up what is, at bottom, a tired narrative about “one last score.” Admittedly, the “let’s do this and then I’m out” premise was less stale thirty years back, but the familiarity of the plot is the least of the film’s concerns. Coffy was little more than Death Wish with an afro, but it never forgot that what the audience wanted was a little tit thrown in the mix of savage violence. Superfly refrained from explosions of bloodletting, which forces the audience to endure a whole lotta walking around and a bathtub love scene that, by my watch, was at least a quarter of the film’s total running time. And hey, I’m not averse to some lovin’ in the tub, but the scene was so confusing that I’m not even sure if that was Priest and one woman, or two women and some brother on the down-low from another film.

Still, despite the sloppy filmmaking, I was impressed by the sharply anti-honkey approach. White cops were all on the take, and several characters allude to the fact that since the criminal lifestyle was all that whitey left them with, blacks had no choice but to leave a string of cokeheads in their wake. At that point in our cinematic history, white America deserved a good thrashing, and I’m in full support of making The Man sweat from time to time. And yet, there is something to the belief that films like Superfly did little but provide unfortunate role models for an already marginalized class. After all, Priest secures enough information to have a leg up on the cops who seek to destroy him, and his final threat — that if he is killed, the chief’s entire family will be butchered — is no doubt intended as a “hurrah” moment for the black audience. 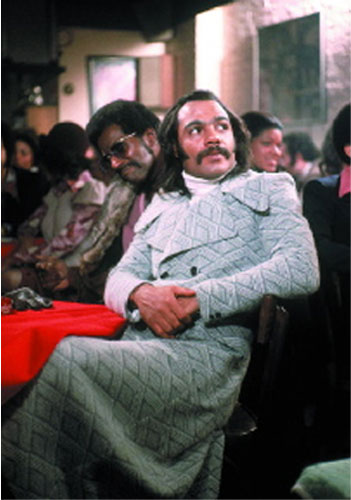 But I did like Mr. Priest, a man who gleefully snorted coke off a crucifix, and threatened to place an underling’s wife on “whore’s row” if any of his money was conveniently missing at the end of the day. So what the fuck am I saying here — did I like it or not? Not really, as I was distracted on numerous occasions, impatient during several self-indulgent asides, and just might have nodded off when the story wasn’t moving forward. But O’Neal was so goddamn masculine that I couldn’t help but wonder what the film would have been like had he been allowed to really let loose. Like Klaus Kinski would have done. You know, pound a few whores into submission, or pistol-whip some sorry-ass junkie. He was menacing, but as he wanted to “leave the life,” you always wondered what in the hell would motivate him to slow down. Several characters tell Priest that he’s full of shit to think he can retire, given that he has no practical skills outside of receiving, cutting, and inhaling cocaine, but as he does get away in the end with a shitload of cash, we are left with the rather boring turn that yes, he’s just going to sleep by the pool from now on. Admittedly, going out in a blaze of glory or with the deaths of at least two-dozen cops on his conscience might have played further into the idea that his life was a life worth avoiding, but at least that would have been exciting.