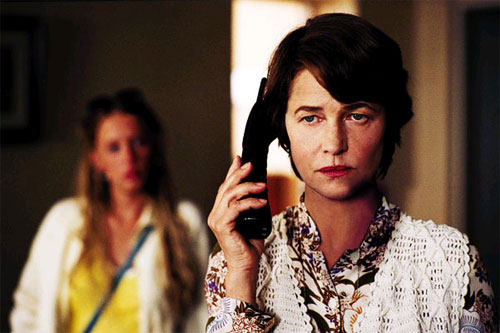 Most people are going to remember the firm, luscious, inviting, drool-inducing breasts of young Ludivine Sagnier (and they deserve to be remembered in their own right), but I want to be the first to strike a claim for the luminous Charlotte Rampling. Some would argue that she has a wonderful figure for a woman of fifty-eight (which is true), but I would go even further and disregard her age altogether. I realize that her age cannot be completely ignored given that she fearlessly appears in the nude (which few actresses approaching sixty would ever consider), but to merely suggest that Rampling is appealing only because she “doesn’t look her age” is a grave insult and doesn’t give her credit for being the most striking woman in the film, unconditionally so. At the end of the day, and allowing for a level of fantasy even I in my delusion understand is impossible, I would take the hand of Miss Charlotte, ask her to share of a cup of tea, and proceed to ravage her with a Cro-Magnon style ferocity, all while leaving Sagnier to her more juvenile pursuits. Her tits would never be far from my mind, but Charlotte (sigh) is complete. Other than the tits and bush and other such fleshy pleasures, Swimming Pool is a sly puzzle; a subtle, well-paced delight not the least bit concerned about playing with your mind and expectations. The film begins as we meet a dry, detached (yet compelling) British author named Sarah Morton (Rampling) as she rides the London tube. It is clear that she is not concerned with fame or fortune, as she would prefer not revealing her identity to leering fans. From this initial introduction, we see Sarah as a private woman more content with the serenity of a quiet room than the bluster of big city life. Sarah is in need of a break as we meet her, and her editor offers her a remote cottage in the French countryside. There, it is suggested, Sarah can work on her new murder mystery without the distractions of home and office (she takes care of her ailing father). As I watched her travel to the isolated home and set up shop (which takes about 20 minutes of screen time to complete), I was delighted at the deliberateness of it all. Here was a film unconcerned with “action” in the traditional sense – and much more attuned to character nuance and development. She wanders, eats, buys food, examines the grounds, and, in an unexplained (but nonetheless telling) move, removes a cross from the wall above her bed. Some less sophisticated folks might grumble with impatience during this opening section, but I was in love, literally and cinematically. My anticipation was growing, I paid close attention to looks and glances, and all the while I wondered where this film was taking me. Because the director was Francois Ozon (Under the Sand), I knew I was in capable hands.

Much more than that I am reluctant to discuss, because the film does depend on several surprises that are best left to the individual to discover. It can be said, however, that Sarah’s tranquility is interrupted by Julie (Sagnier), who claims to be the editor’s daughter. She has no intention of staying elsewhere and proceeds to distract Sarah with a series of noisy trysts (with decidedly unattractive Frenchmen) and endless hours of sunbathing by the pool. There is a tremendous amount of sexual tension generated by these scenes, and we wonder if Sarah is genuinely appalled by Julie’s behavior or if there is something less obvious going on. Is Sarah attracted to the young tart? Does Sarah secretly long to be Julie, in that she is uninhibited and gleefully promiscuous? From the loving shots of Julie’s body to the bizarre preoccupation on the part of Sarah, we are left guessing. A possible threesome? Hot lesbian sex? I simply did not know. Ozon prefers to leave things in the realm of the mysterious, although more discerning viewers will pick up clues along the way that reveal what he may be up to. In this way, the ending is less of a surprise than it is a culmination of gentle building – a logical end to all that has come before. 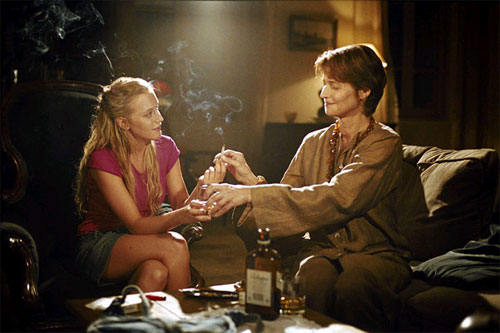 In all, this is a fun movie, not at all the somber, reflective work of Under the Sand, but more in the spirit of Ozon’s 8 Women, which used musical sequences within the context of a murder mystery. Here too we have murder and intrigue, shifting identities and quirky turns of events, all told with a sly wink and a nudging reminder that as the director, he is entitled to push us around a bit. It’s even better when there’s a bit of commentary tucked away in the enjoyment. But forgetting all that for a moment, there is Charlotte Rampling, a stunning reminder of how it is possible to age not only with grace, but with a full rejection of the notion that sexiness is best left to the younger set. And when you watch her flash those glorious middle age breasts and seduce a repellant gardener, all for the sheer pleasure of the act (and her art, wink-wink), you’ll smile along with me.