Home / Reviews / Movies / SOLARIS (The not as good one)

SOLARIS (The not as good one) 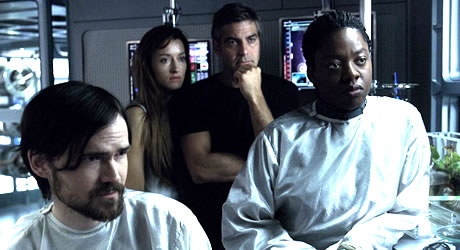 I saw Soderbergh’s Solaris and liked it. I’ll forgo all of the usual ratings and just tell you up front that it’s a 7/10. Tarkovsky’s version is superior – that should probably go without saying. But “the other Steven” has come up with a decent Solaris Light, and let’s face it, there is a place for light versions of Tarkovsky films.

The story of Solaris provokes a slew of intellectual questions, but the one I keep coming back to is how this film ever got made. I spent perhaps a quarter of the film imagining Soderbergh pitching the thing to the now unemployed studio execs who greenlighted it.

Exec 1: Steven, you’re a genius! Three straight hundred million dollar films! You can’t loose! What do you want to do next? Anything! You name it!

Steven: Well I’ve always been a big Tarkovsky fan and I might want to do one of his masterpieces.

Steven: It’s about a Russian monk who lived during the middle ages and…

Exec 1: Wait a second. I’m having a flash back from my college film class… God. Oh God. Solaris? The movie where the guy just drives through Japanese tunnels for 45 minutes?

Exec 1: The one with a 10 minute shot of a plant in a stream, and with no guns whatsoever?

Steven: It’s ok. I’m going to cut that stuff out.

Exec 1: I’m having a moment of inspiration. Steven, what do you feel when I say “Battle Star Gallactica?”

Steven: It has to be Solaris.

Exec 2: So what’s the movie about?

Steven: It’s about perception, the nature of humanity and how our relationships to other people are limited by our own consciousness.

Exec 2: Fuck, Steven, that’s not going to play in Ohio. It might not even play on the campus of NYU.

Steven: But I can make it for only $50 Million.

Exec 1: Solaris! Look Steven, why don’t you just shoot us and burn down the studio. It’ll save time.

Exec 1: He has to fight an alien monster.

Exec 2: George Clooney’s ass. And it has to be a shot where you can see that it’s really his ass, not a double’s. 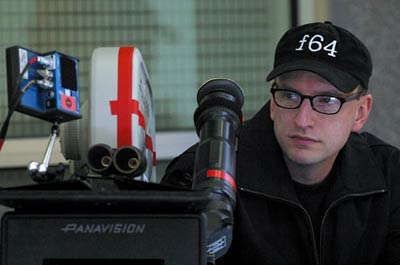 Steven: I can do that.

Steven: Once. Anything more would be too obvious.

Steven: I didn’t know you knew the word ‘thrice.’

Exec 1: Now Steven, this is not going to be a slow paced, intellectual snore fest like that Russian piece of shit right?

Steven: No. I promise.

STEVEN looks into the hallway and sees JAMES CAMERON walking by.

STEVEN darts into the hallway and grabs JAMES CAMERON by the shoulder.

Steven: You know how people who can read hate you?

Steven: You should produce this movie I’m doing. Very intellectual. You might earn some respect.

James: That’s what they said about winning an Oscar.

Steven: Who said that?

James: What do I have to do?

STEVEN leads JAMES back into the conference room.

Steven: James has agreed to produce.

Exec 1: Well. That’s reassuring. James, you’re not going to make this thing too intellectual are you?

Exec 1: I was kidding James. Let’s do this thing.