Rarely do movies get everything right. More often than not, the exact opposite is true. Spellbound is as close to a perfect movie as you are going to see for a long time. I thought of nothing else while the film ran and I was very upset when it ended. More than that though, I was moved. [Ed Note: Jonny’s girlfriend tells us that he cried like a little bitch for half of it.] I was honestly blown away by this movie. Yana Gorskaya could possibly be the greatest editor working today. The director, Jeffrey Blitz, really lucked out by signing her up. I don’t have enough accolades to pile onto this film. It is magnificent and absolutely worthy of your hard-earned cash. Go see it.

Here’s why. Spellbound is a documentary ostensibly about eight teenagers trying to win the National Spelling Bee championship in 1999. The concept might sound a bit precious at first. I will admit that it did to me as well. My girl and I were actually trying to see 2 Fast, 2 Furious and the new Charlie’s Angeles Debacle. Thankfully, that didn’t work out. What you realize almost right off the bat in Spellbound is that the National Spelling Bee is one of the most egalitarian institutions in existence. All a kid needs to compete is a dictionary and time. This becomes amazingly obvious when we meet Angela Arenivar, a young girl in some God-awful Texas town whose parents don’t even speak English. Obviously smart, Angela is caught between awkward puberty and her parents’ (illegals from Mexico) desires for a better life for their children; she is just the first example of the crushing power of this film.

The first half of Spellbound introduces us to the other subjects of the movie. They range from Ted Brigham, a Trench Coat Mafia-looking prince of darkness type who muscles his way into the competition on the strength of his smarts alone, to Nupur Lala who, violin playing aside, seems twenty years older than she is. The sense of class, the stratum between poor, middle class and rich is woven nicely into the film. Ted’s parents are peacock farmers/teachers (they probably make money selling peacocks) and judging by his two brothers who we also meet, Ted got all the brains in the family. There are something like 40 people in Ted’s class in a dirt-poor Missouri township. Contrast him with Neil Kadakia, another hopeful who seems much more comfortable on a basketball court than studying for the bee. Neil lives in San Clemente (home of the Nixon Library), right on the beach in one of the two houses his father owns. Neil’s sister placed fifth in the nation a few years prior, and it seems to be Neil’s duty to avenge his sister’s “loss.” This is absolutely how Neil’s father sees it. Not only does Neil’s Dad ruthlessly drill the boy for hours daily (he even says the words Neil is supposed to be spelling into a microphone. Neil is literally seated three feet away – at most!), but he employes several different spelling and language (Spanish, French and German are mentioned) coaches to further “help” Neil. More remarkable, Neil’s grandfather back in India had 1,000 people praying for Neil to win the National Bee, and if Neil does, gramps is going to throw a feast for 5,000. Just a little pressure for a 12-year-old. 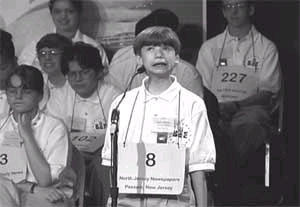 Each one of the kids (and their families) is more interesting than the next. I would love to know how the subject-selection process went down. Quickly, we are introduced to Ashley White, a little black girl from the some sorry project outside of Washington D.C. who goes to Nationals literally against all odds (I would doubt there was even a book in Angela’s home growing up). Then we meet April DeGideo, whose housewife mother constantly says things like, “Bee happy” and has the family fridge decorated with bee magnets (the only help she is able to give her nearly autistic daughter.) April’s dad is a bartender who seems about as well read as Terry Bradshaw. Eventually we get to the competition’s sole heavyweight, Emily Stagg of New Haven Connecticut. Her all-too-healthy home life looks like a distillation of Architectural Digest, The New Yorker and National Public Radio. We get lots of shots of her practicing her equestrian skills and when you hear her ask for a word’s etymology there is little doubt that she is one of the smartest and cunning kids in the competition. Finally, little Harry Altman just has to be seen to be believed.

Spellbound is set up like a quest. Eight fighters from distant lands are all called and all eight seek the same trophy. Think Fellowship of the Ring for the non-Star Trek set. Seriously, the film is as entertaining as any blockbuster and as compelling as any sporting event. The tension is immense. Like all great films/works of art, Spellbound rises well above its subject matter. Lets call it transcendental. The kids aren’t even the sole subjects of the film, for in many cases their parents are more interesting. But the film goes beyond even that. Ultimately, Spellbound is about humanity – how strange and oddly wonderful life is and can be. I’m going to stop before I get too mushy [Ed Note: And start crying like a little bitch.] But I just want to really stress how engaging, mesmerizing and flat-out amazing Spellbound is. I have nothing bad to say about the movie because there is nothing bad about it. Sadly, it lost out to windbag, lefty-darling Michael Moore’s latest work at Oscar time, but no matter. Spellbound doesn’t need any awards or words of praise. It stands firmly on its own two feet as the best movie out there right now. I’ve tried comparing it to my perennial favorites The Big Lebowski, L.A. Confidential and Patton, movies that I not only watch once a month and can recite backwards and forwards, but all three are films that I care so deeply about I can’t even write a coherent review regarding any of them. Time will ultimately tell, but I think Spellbound is going to age remarkably well. In other words, forget my stupid review and go see this spectacular movie. [Ed Note: Little Bitch.]