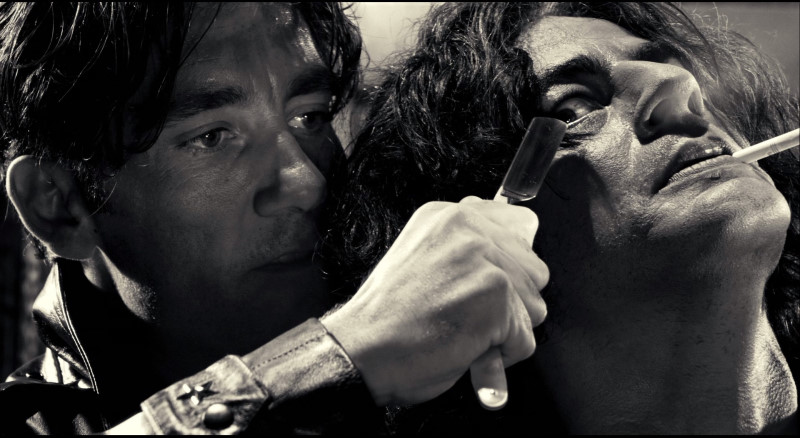 What’s this, another comic book movie? Have you lost your fucking mind?

My sense of obligation knows no bounds, and for one of the few times I’ll openly admit to, I had to see what the geeks were so up in arms about. I am wholly unfamiliar with Frank Miller, have no love for Robert Rodriguez, and have quietly pushed violent stalkers to rid the world of such blights as Bruce Willis, Mickey Rourke, Elijah Wood, and Brittany Murphy, but this phenomenon couldn’t go unwatched forever.

Oh, Jesus Christ Cale, please don’t tell me you fell for it?

The moment Mickey Rourke (as Marv) put a bullet in a priest’s brain while sitting in a confessional, I was hooked. And as Marv’s story thread continued, I was privileged to watch him slam axes into cops’ skulls, feed Elijah Wood to a rabid dog (after which he sliced off his head), present the head to an important Cardinal (Rutger Hauer), and proceed to butcher that same Cardinal without a moment’s hesitation. Marv banged prostitutes, murdered at will, and leered at young tarts while at strip clubs. It was Rourke’s most realized performance in years, perhaps ever. Even while sitting in the electric chair, Rourke was nasty, vicious, and charming as hell. Call it his great comeback.

How on earth did Robert Rodriguez know that you’ve always wanted to watch Elijah Wood be torn to pieces?

His instincts were spot on this time around, as he also knew that we’d want Wood to play a demented, Bible-reading cannibal who murdered prostitutes and placed their heads on a wall like trophies. He’s a nimble, speedy little shit, and he utters nary a word throughout his brief appearance.

I see both Jessica Alba and Brittany Murphy make an appearance. Is it what we’d expect?

What, that Murphy would appear wafer-thin and wasted? Or that Alba would reinforce why she’s stiffening young cocks throughout America? Both are around solely to appeal to young male fantasies, and on that score, they both deserve Oscars. I’m not sure if Alba can speak or what her voice might sound like, but I look forward to a long, fulfilling career of her playing prostitutes, strippers, sluts, skanks, and lap dancers — no matter, so long as she’s as close to naked as possible.

You seem upbeat. Were things really that good?

I won’t hide it — had this movie ended about halfway through, I would have run from the theater insisting that Frank Miller be canonized. Everything — from the tone and portrayal of women, to the tough talk and bad-ass killing sprees — is a ham-fisted appeal to teenage boys with money and hormones to burn. This is their world; where even ugly mugs can get laid, and the chicks (stacked and packed like the babes in a G. Gordon Liddy calendar) love a little bloodshed now and then. Revenge is sweet, evil is vanquished, and chicks like Alba can make it to age 19 with their virginity defiantly intact. Still, the noir style ran out of gas with about 45 minutes to go, and I slipped in and out of consciousness from then on. What pulls you in and keeps you giddy with sheer visceral delight simply cannot be sustained for that long.

So only the Rourke tale kept you involved? How unexpected is that?

The stories intertwined, but once Rourke left the screen, things went limp — all except my cock, of course, as there were scantily clad whores about. Hartigan’s (Bruce Willis) tale was straight out of the gumshoe playbook (old cop with a bad ticker takes the rap for a crime he didn’t commit, spends some time in the big house, and finally sacrifices himself for a young dame who needed a second chance), but he killed with the style and grace of a Tarantino anti-hero. His murder of Roark Jr. (the depraved, deformed son of the Governor) is a second half highlight, as he pounds his head into pulp and jelly, but not until he tears off his penis with the relish of a schoolgirl feeling that first blush of puppy love. Clive Owen’s tale follows the same familiar lines, although it does lead to a stellar sequence where Benicio Del Toro is, in the words of one of the whores, “turned into a Pez dispenser.” But since he’s a cop, albeit a dirty one, his killing threatens to unleash the pimps and other beasts of the night. Until now, the whores were left alone to do their duty, but this means war. Our collective need to see pain and death thanks you.

Okay, are you now willing to admit that comic books — or graphic novels — can sometimes be worthwhile?

On the whole, they still remain some of the least interesting projects to hit the big screen, but Sin City works because it’s dark, twisted, sick, and a direct assault on Christian values. That alone sends me for the hand lotion. If some chick isn’t being raped, she’s being hunted for that very purpose; and women are either flashing skin, begging for help, or waiting to be tortured. Perversion and depravity are everywhere, as religion and politics are as despicable as the flesh-peddlers and rapists who run the streets. Hell, they are the flesh-peddlers and rapists who run the streets. Heads spilt open, blood gushes like lava (with the stench to match), skin tears; and whips, guns, knives, and grenades have long ago replaced any form or words or laws as a means of social control. Duplicity is punished (in this world, the worst possible sin is betrayal), but on the whole, the only chance for redemption lies in a messy suicide. At its best, it’s like the 1940s come to life, only with more artistic freedom to rub our noses in overt displays of brutality. At its worst, it’s empty, soulless pandering to the cruel, animalistic side of mankind. So even when it falters, it knows the score. And yes, I’m still hard.