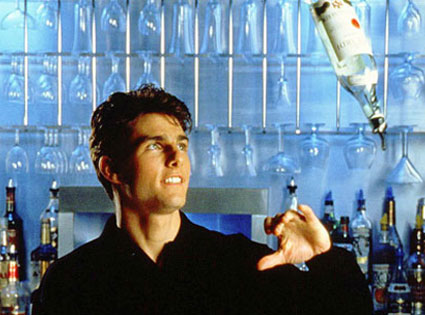 Tom Cruise will perhaps never equal the homoerotic explosion of 1986s Top Gun, but his indulgent turn in 1988s Cocktail is close behind, especially in terms of its exploration of that unique form of male lust that is best expressed for a so-called best friend. Tom (as Brian Flanagan) and Bryan Brown (as the much older Doug Coughlin) never actually exchange fluids, but their mentoring relationship was (and is) Hollywoods most daring way to explore butt-sex without the required graphic imagery. They flirt, dance, exchange knowing glances, and tease, all before the falling out, which is later followed by their sassy reunion. Brian might dream of starting a joint called Cocktails & Dreams, but it is Dougs polished cheeks that he really wants to open, and he unnecessarily runs through a stable of chicks before realizing that when in doubt, go with your gut. Alas, Doug commits a particularly messy suicide late in the film, denying Brian the love affair that always beckoned at the surface. As Reagans decade came to a close, Cocktail was in many ways a summing up; a closing chapter for an era of unspoken masculine fears that took the long road around the phallus, diverted at the sphincter, and found a safe haven in nihilistic violence directed at the Soviet Union. In essence, then, the Cold War had its foundations in sexual frustration; where longing for hard, moist torsos and defiantly diamond-like abs yielded their promise to a nasty, largely underground war for global supremacy.

But this is not a tale of misdirected savagery or sweaty warfare, but a tender love story of capitalists and entrepreneurs with quivering loins, both for profits and seminal juices. Brian seeks a business degree by day and works at a poorly disguised TGIFridays by night, and soon comes to the realization that books and professors are obnoxious roadblocks to success, rather than gateways. Ill teach you everything you need to know, Coughlin states, with the kicker that within this very bar — where people munch on buffalo wings and batter-fried nuggets of what may or may not be assorted chicken parts — an angel will come to bestow a vast fortune on that wide-eyed charmer who is but the 854,000th New Yorker wanting to open a bar. Brian is tutored in the ways of throwing shakers and shot glasses about, which is curious indeed as one would think busy customers might not want to wait an extra twenty minutes for a drink as the pair complete their choreographed routines. The music is loud, the waitresses bitchy and grouchy, yet the joint is hopping with possibility. If, after all, I am going to plunk down $9.50 for a daiquiri, I had better see a dance number from A Chorus Line immediately preceding my imbibing.

Coughlin talks a good game to be sure, and I half believe him that all the women of Manhattan want in life is a chiseled face who can mix drinks like hes on a conga line. Are women this easily seduced? In a room where alcohol overwhelms even the cheapest of colognes, I suppose anything is possible, but I wonder if such truths existed prior to films like this, or if in fact we learned to elevate mixing skills above all else in our hunt for a mate. Brian and Doug are quickly whisked away by a business owner to tend bar at a hip joint called the Cell Block, which is the most crowded establishment ever featured in a motion picture. Its good to see that Ronnie quickly dispatched with those pesky fire codes. This is the kind of place where a middle-aged accountant will shout poetry from the stairs, and the bartender himself will exclaim, I am the last barman poet, before being surrounded by screaming fans. Brian is soon seduced by patron Gina Gershon, a photographer who apparently has nothing else to do with her time but sleep with morons who pour drinks for a living. They fuck on the first date, Brian falls in love, and just as quickly, he loses her to Doug, who had his hand forced by a $50 bet. Brian knocks Doug to the floor in a jealous rage, storms out of the club, and catches the next flight to Jamaica; a place Brian believes is the key to his salvation. Hell make untaxed money for three years, return to the Big Apple, and open a joint for a few thousand bucks right on top of the worlds most expensive real estate. 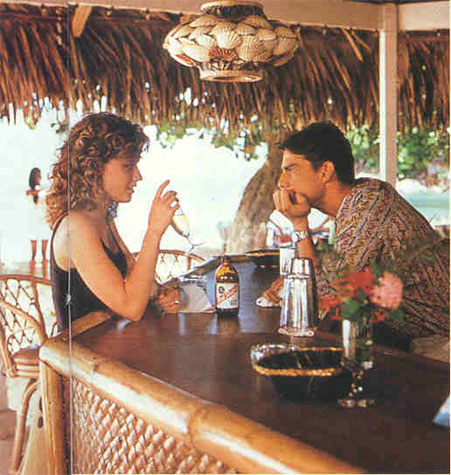 Jamaica ruins everything for the lovebirds, as Doug shows up with his rich, vapid wife (Kelly Lynch, so vacant as to be inert) and Brian romances sweet Jordan (Elisabeth Shue), while also banging the older Bonnie. Jordan is secretly rich, but Brian is clueless, that is until he knocks her up and returns to New York to win back her love. Throughout, theres a lot of fighting, dumping of food on heads, and breaking down doors in penthouse suites. Brian thinks he should be with Bonnie because she is loaded, but soon throws it all away at an art show, which he thinks is a pretentious fraud (and so it is). Brian punches out an effete artist, provides the bon mot Things always end badly, otherwise they wouldnt end, and tries desperately to get Jordan back. To complicate matters, Dougs wife hits on him, asking to be fucked because, well, marriage needs to be about fidelity or trust. After Brian takes the whore back home, he returns to Dougs boat and finds him bleeding all over an expensive table. Having thrown away millions of dollars on investments that didnt pan out, he decided to kill himself in the most dramatic manner possible. But we know the truth, as does Brian, who weeps like a grandmother for his sweet, unrequited love.

Its all so forced and stupid and overwrought, but it somehow manages to work on every level, remaining one of the few films of that cruel decade which actually gets better with each viewing. It speaks to a time when everyone believed in the American Dream, and the people — those underwhelming, unsophisticated lot who gave it all away with few questions — could be distracted by a drink and a smile, both in the local watering hole and in the White House itself. How fitting, then, that the 80s anthem Dont Worry, Be Happy should make its way to the films soundtrack, for while AIDS, homelessness, poverty, and illegal wars devastated the globe, a handsome pair of bartenders could convince you that the only thing that really mattered was the number of ice cubes in your glass.