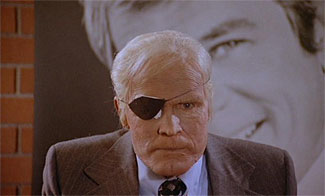 If ever a film were in dire need of a remake, well, it is The Clonus Horror. Featuring not only some of the worst acting ever recorded on silver and gelatin but some of the worst production values you will ever, ever see, The Clonus Horror is redeemed by one specific feature and that is the quality of its concept. I honestly can’t even tell you that the plot is good, for aside from the horrid dialogue the motivations of the characters didn’t even make sense. Still, the idea behind the film is a great one that seems all the more plausible now in 2005 than I’m sure it did back in 1979 when this film was released. The idea, if you haven’t already divided “clone” and “us” out of the title, is that a secret laboratory has been established where 100% identical clones of the wealthy elite are grown to be organ donors. These clones live in a compound (appropriately, it looks to be the campus of Moorpark College, which is very close to where I grew up in Thousand Oaks–a town that is little more than a breeding ground for smiling morons) where their lives consist of nothing but exercise. Got to keep those new lungs healthy, right? Eventually, they are ready they “go to America.” Fantastically brilliant, “going to America” consists of being killed and then stuck in a plastic baggy so that their organs can be harvested at a future date. Good stuff.

There were actually some cool things about Clonus. Like, the bagged bodies waiting to be harvested had a pretty good creep factor. We’ve seen it before and since but Clonus did a good job with the body farm. Also, the film featured a pretty good–if at times over the top–score. Every time you saw the body bags you heard a literal chorus of moans and screams. The procedure where the clones were killed was pretty sinister as well. The “patient” is given a glass of orange juice ala Jim Jones and passes out. Then their blood is pumped out of one arm and a green fluid is pumped back in through the other. Finally, the clone is placed into a clear plastic bag and some smoke is produced from somewhere that finishes them off. Why they aren’t placed into opaque bags is anybody’s guess, but obviously that would not be nearly as affecting or horrifying to look at when you have a whole room of them hanging on meat hooks or however they were propped up. My favorite device was the confession booth. Using the fact that he had no budget to speak of, the director had the clones just walk into a phone booth and “confess” their sins and get answers to their problems. The confessional was really more of a Q&A device where the scientists (poorly) disguised their voices and told the clones not to worry. Everything was fine, just fine. Also very cool was the bright yellow Lotus Esprit, but, like, you know… Anyhow, that’s basically it as far as good things about Clonus and production values go. I mean, the clones all had little earrings that looked like painted staples. I’m sure in reality more than half the budget went directly to cocaine. Watch it and you tell me.

Now, for obvious reasons, the clones need to be kept in the dark about their purpose in life, in addition to the larger world outside the compound. So, when they are just a bunch of cells in the petri dish, they are infected with a virus that makes them stupid. Honestly, most of the clones looked exactly like young Laura Bushes–smiling brightly with dull eyes and empty heads. They were all of course way healthy and good looking and wearing the shortest of short shorts. For no justifiable reason whatsoever, the scientists in charge of cloning the clones (Dick Sargent of Bewitched fame and Zale Kessler) have decided to grow a few “control” clones. These are clones of normal intelligence. It is never explained why they do this, but it is essential to the plot, for one of the “controls,” Richard (Tim Donnelly), decides that he wants to “go to America” (graduate from Bovine University is more like it) on his own timetable and subsequently breaks out of the compound. He leaves behind his girlfriend (clones have girlfriends–who knew?) Lena (Paulette Breen), but manages to pilfer not only a videotape that explains EVERYTHING, but the identity (and address) of his, uh, cell donor. The existence of the tape is pretty much the equivalent of having a Bond Villain prerecord his evil plot for world domination, but alas, quite essential to the plot. After running through much of the greater Los Angeles basin, Richard winds up quite comically crashing a stolen bicycle into trashcans belonging to none other than Kennan Wynn! Yes, Colonel Bat Guano of Dr. Strangelove fame. Turns out that Wynn is an ex-reporter and is going to help Richard find his, er, “host.” I really don’t know what to call these people. “Father?” In quotes like that? OK.

Richard’s “father” turns out to be Professor Richard Knight who is only notable because his brother, Jack Knight, is a California Senator who is running for president. It must be said that Peter “Have You Ever Seen A Grown Man Naked?” Graves does a superlative job as a corrupt, crooked and scheming politician. Despite the cheapness of the supposed political rallies, his speeches do an amazing job of depicting politicians are vapid bags of crap. Stuff like “I know that America can be great again, and as your candidate I intend to give you what you want by making America great again. Because like you, I too love this great country that we call America and want to see it be great. Again. I am the people’s candidate and I will do what I said I would; make American great once again with your help. America. Great. You. Me.” Totally inspired. Anyhow and of course, Senator Knight knows all about Clonus. In fact, his heart is new and was just installed two ears earlier. And he went to very great lengths to have his brother cloned. Professor Knight is initially horrified by the idea, countering his brother’s excuse of, “What if Einstein could have lived to be 200-years-old? Or Churchill or FDR?” with, “What about Hitler? Or Stalin?” However, after being reminded by Jack that he too will die one day, Richard seems to come around to the conclusion that yes, Clonus is a good idea, and furthermore he had better get Richard back on the farm because he is probably going to need some new kidneys sooner than later.

That’s essentially the plot, aside from the triple-extra rad Laura Bush-smile Richard’s girlfriend has on her face after Dick Sargent (what a name) lobotomizes her. As mentioned, the acting is almost unbearable. In truth, it is so poor across the board that you can’t even really get angry. It’s not like the actors could have done any better. Even kookier is the weird almost-love scenes that Richard shares with the Professor’s son. The two are always holding shoulders and staring into each other’s eyes. The worst performances of all were the “guides,” who plot-wise were essentially guards and Narcs that watched the clones’ every move. I swear that director Robert Fiveson just broke up an intramural basketball game and forced the players into acting. To call the guides stiff and wooden would be an insult to trees. Still though, there are some very cool ideas lurking under the surface. Think The Truman Show but instead of for TV ratings, these people are nothing more than cattle awaiting slaughter with big stupid grins on their faces. In fact, from “birth” they have all been conditioned to really, really want to “go to America.” And the constant surveillance, especially the stuff that took place out in nature (apparently, clones are pretty free to roam around at night) was eerily similar to parts of 1984, when Winston was sneaking off to the woods for some good loving with Miss Junior Anti-Sex League. Also very cool was the beer can floating down the stream that Richard finds. He can read and wants to know what “Milwaukee” means. The confessional tells him it is a type of ocean-plant. So, if you watch The Clonus Horror be prepared for a very bad movie, but also for a very solid idea that some of you budding screenwriters might be able to do something with. As for me, I’m having another beer.