THE CHRONICLES OF RIDDICK 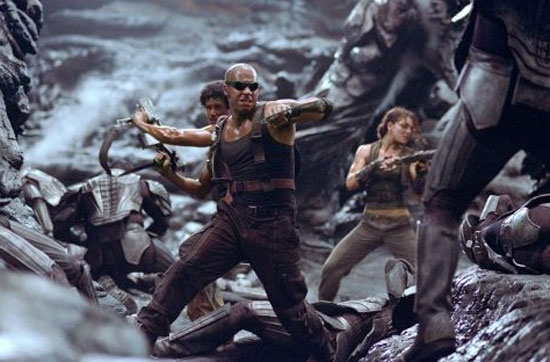 I need to say one thing up front; The Chronicles of Riddick is worse than stomach cancer. Honestly, I can’t even call the film The Chronicles of Riddick; I refuse to accept anything about this piece of incompetent trash. So, for the remainder of this review, The Chronicles of Riddick will be referred to as Rotten Shit-Fest. Got it? Good. I need you all to put on you Sci-Fi (nerd) thinking caps for a second. Remember the drop off in quality that happened with the Star Wars franchise, specifically from like say The Empire Strikes Back to The Phantom Menace? Going from the pretty decent earlier film Pitch Black to Rotten Shit-Fest is a much larger plunge, quality-wise. I’m not kidding. Anything remotely interesting, appealing or redeeming from the first film has been rendered into tripe for the sequel. Just an unbelievably, unimaginably horrible film. Stomach cancer!

There are so many points of entry for me… I really don’t know where to begin. Usually when this happens, I start making lists. So fuck it, here’s a list of fucked, dumb-ass stupid shit that happened during Rotten Shit-Fest. Man, that last sentence had a lot of cursing in it.