Fair Value Rating of The Wolverine: $11.50. Wolverine’s the best at what he does- and what he does is stabbing a lot of people.

The films begins with Logan (Hugh Jackman) hiding in a Yukon cave, traumatized by his memories of X-Men: The Last Stand and Origins: Wolverine. He’s talked out of his solitude by Yukio (Rila Fukushima), an employee of Yashida Haruhiko (Hal Yamanouchi). Long ago, Logan saved Haruhiko’s life at Nagasaki, where Logan was being kept as a prisoner of war. Logan arrives in time for a funeral and stays just long enough for the vicious in-family war of succession to begin.

Essentially, Wolverine has wandered into the middle of some watered-down PG-13 knockoff of a Takashi Miike film. So naturally, Logan sleeps with the teenage Mariko (Tao Okamato) at the first opportunity. She helps him to get his manhood- or in this case, his mutant-hood back- after his superpowers are stolen by a eurotrashy Viper (Svetlana Khodchenkova). This film somehow manages to be less ludicrous than Origins: Wolverine, even though it features a eurotrashy biochemist supermodel, and has a climax centered on a samurai mecha.

The film succeeds by the same appeal that launched Frank Miller’s reputation in the comics- tough guys, vulnerable dames, deplorable villains, and a high body count. Add to that the various betrayals and the conflicted loyalties of the various Yashida family members and functionaries, and the first two thirds of The Wolverine is a gritty crime film that happen to feature a superhero. The comic book run was already a teenager’s fantasy of Japan- fight ninjas, sleep with delicate Japanese teenagers, and roam from Nagasaki to Akita, enjoying the sights along the way. 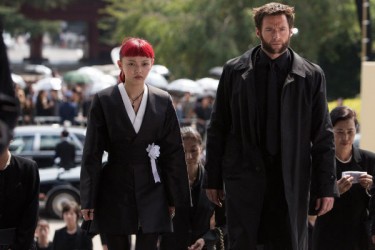 Less Talky, More Stabby: This is the summer film if you want sword play. There’s archery, knife fights, and katana dueling. Light on the blood but heavy on the perforation.

How deeply does this film offend the fanboys? Not too badly, it’s about the best adaptation of the material that you can realistically expect. Jackman keeps it simple other than a sub-plot involving his dreams about Jean Grey (Famke Janssen). He growls, he demands to be left alone, he shivs and stabs an escalating parade of thugs, ninjas, and cyborgs.

I enjoyed this film for being a teenager’s version of Japanese dynastic tragedy. Hugh Jackman works as the guileless and befuddled eye of the hurricane. His Wolverine is an Anglo ronin who prevails as much through honor (the allies that back him in the final fight), as he does through martial prowess.

Despite the ridiculous aspects of the story, the film avoids collapsing the audience’s suspension of disbelief. The film begins to unravel in the third act, and the motivations and loyalties of the cast flip almost randomly. As the films in Fox’s X-Men franchise goes, The Wolverine exists at the median, inferior to First Class and X-Men 2, but a more coherent and entertaining story than Last Stand or Origins: Wolverine. Like the first X-Men, it’s entertaining, but flawed. Still one of the better films of this summer.