The Smurfs once again delight audiences everywhere with their weird Communist society and language of “shit” and “fuck” concealed with the cunning use of the synonym “smurf”. In the second of hopefully a thousand live action films, Jewish stereotype Gargamel takes a break from hoarding gold to create Smurf-like creatures called Naughties that will yield some magical Essence. Rather than harness the Dark Crystal like any reasonable person, he kidnaps the only female Smurf from her dawn to dusk breeding schedule in order to make more Smurfs. And it is up to Papa Smurf to rescue Smurfette from a bleak fate of eternal rape (Smurfs are immortal, as you well know) by Gargamel to return her to eternal rape by Smurfs. A story of our times. 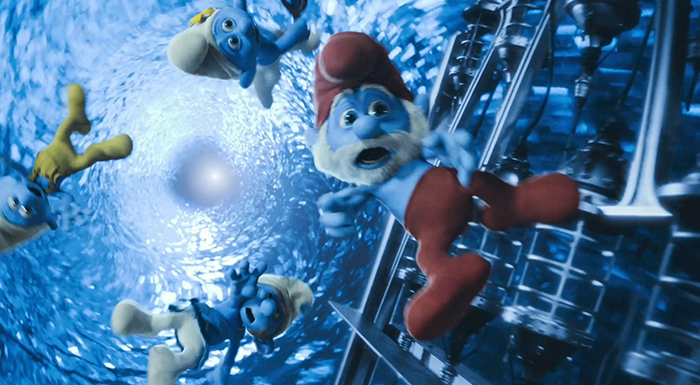 Apart from the usual product placement and head-bonking hijinks, I found Smurfs 2 to be engaging and entertaining, particularly as it went down dark corridors that nary an animated feature dares to dwell. Smurfette is not the Mary surrogate of the cartoon, but a proper slut befitting the only female of the species. When Hefty Smurf promises her “I’ll fuck that hat off”, there wasn’t a dry eye in the house. It gets pretty strange around the halfway mark as the Smurf brand takes on the liberal media. Papa Smurf uses a good portion of his screen time to deny the Holocaust, though it doesn’t really fit in with the narrative. Brainy Smurf outlines a plan to rescue “The Whore of Babylon” as he calls her via magic bridge or something on Ellis Island, and launches into a ten minute-long expletive filled anti-immigration screed. The Naughties created by Gargamel are obvious stand-ins for illegal immigrants, and Hank Azaria (as Gargamel) bravely includes a monologue he wrote for the movie explaining how the Jews funnel immigrants into America to bring down Christianity and fight racial purity, and their only enemy is a well-armed populace. One scene where Jokey Smurf delivers a bomb package to a room full of schoolchildren, remarking that the ‘war for Christian purity is about to begin’ was kind of over the top. Still, the theater could not help but burst into applause when Papa Smurf called Treblinka a ‘Zionist lie’.

This sort of feature, or any children’s entertainment advocating, as Papa put it, “driving Gargamel and his people into the sea” isn’t really my thing. I have no strong opinions on gun control as such, but actually bringing in George Zimmerman for a cameo so the Smurfs could give him high capacity magazines for an AR-15 and urging him to “keep up the good work” was pushing it. I suppose there is room for cinematic auteurs to dare to be controversial. This one was off the deep end, but at least it wasn’t a bland and inoffensive cash-in on childhood nostalgia with fart jokes added. That would have been much worse.