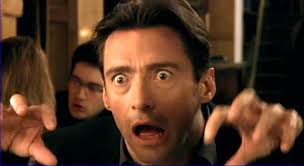 Just spare me the suspense, man. Is Movie 43 really the worst film ever made?

Waitwhat? I heard it was.

Have you seen Precious?

Because its the single worst motion picture ever released under the banner of a major or minor studio.

Mariah Carey, dude. And a killer whale-sized black chick who steals fried chicken. And shes raped by her dad. Oh, and theres a retarded kid in there somewhere. 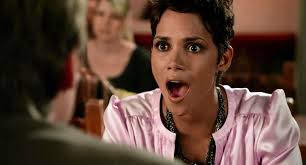 Jesus Christ, could we get back to Movie 43? What the hell is it?

Dennis Quaid is a desperate man. He wants Greg Kinnear to buy his script. He spends an afternoon pitching his product, which is the movie we see. Only the studio isnt interested. Neither are we. So Quaid pulls out a gun and makes Kinnear listen. Were not so fortunate. Apparently, Quaid also sucked off a security guard to get his foot in the door. In the movie, too. 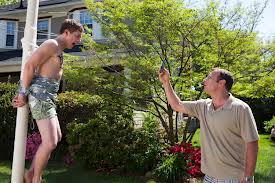 So, the movie is broken down into 12 segments  shorts, if you will. Nine, really, plus three commercials. Major stars take part. Like, Oscar-nominated stars. And Anna Faris. Theres a Culkin, Snooki, Uma Thurman, Naomi Watts, and Halle Berry. And she won an Oscar. Emma Stone! That girl from Kick-Ass! Its like an Altman movie, if Altman had told the screenwriter to go fuck himself before putting a bullet in his heart.

I suppose well have to talk about each and every segment.

We open with The Catch, which is about Kate Winslet going on a blind date with Hugh Jackman. Only he has a set of balls hanging from his neck. And no one else seems to know or care. Which is crazy, because Hugh Jackman is, like, super-handsome. And he has a pair of balls on his neck! Next up, Homeschooled, which features real-life couple Liev Schreiber and Naomi Watts as kooky parents who homeschool their teenage son. They want his life to be hell, so they call him a fag, push him around, embarrass him in the shower, tie him to a flagpole and smear him with shit, and make him lose his virginity to his own mother. Like two-thirds of actual homeschooling families. Then, The Proposition. Anna Faris and Chris Pratt are in love. He decides to pop the question in a park. Shes cool with that, but shed prefer he poop on her. She emphasizes poop, because shit is for whores. Poop is for soul mates. A friend advises Chris to eat Mexican food so he can do his best. Hes also given a laxative, which the friend calls poop Viagra. During foreplay, as he farts and sweats, he gets impatient and screams, Roll over and let me shit on you! She leaves in tears. No matter, as hes soon hit by a car and explodes. Because hes filled with shit, er, poop. Now you’ve seen the missing reel from The Magnificent Ambersons. 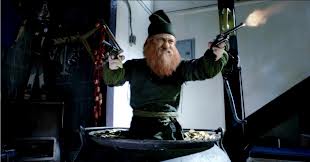 Is that it? Thank the stars.

No, theres more. Veronica stars Emma Stone and some Culkin kid. He works in a grocery store. She gets in line and berates him. Do you still like fingers in your butthole?, she asks. He does. Is she still a whore? She is. And what about the VD? A black man then grabs the mike and talks about real love, which is what I thought we had just witnessed. Finally, a commercial break. Its the iBabe, which is like an iPod, only its an actual woman! Richard Gere is on board for credibility. The second commercial is a pitch meeting where the suits are concerned about dicks being shredded in the vagaports. I said vagaports. Remember this the next time you cant sell your own script. Better yet, don’t even write one. It’s a rigged game and you can’t win. Ever.

Super Hero Speed Dating is up next, where Uma Thurman is Lois Lane and Kristen Bell is Supergirl. The latter is speed dating with Robin, while Batman sits under the table, staring at her hairy bush. Wonder Woman eventually shows up, screaming at Batman that she aborted his baby. And for good measure, we learn that Supermans jizz is like a shotgun blast. Oh, and Supergirl turns out to be a dude. Machine Kids is another commercial, and it tells us not to scream at our copiers, fax machines, and soda dispensers because, well, theyre full of children. And they cry when we yell at them. Middle School Date follows, wherein the Kick-Ass girl has her first period on her boyfriends couch. McLovin shows up as the guys brother, and he wants to stop the bleeding with a sponge. Thankfully, the dad arrives and says only an erect penis can stop the tidal wave, which is awesome, because the girl is a 7th grader. Yeah, and theres a tampon commercial on their TV that is nothing more than a shark devouring a hot chick.

Happy Birthday features Seann-William Scott and Johnny Knoxville as best friends who fight over a girl. Scott tries to make amends by buying JK a leprechaun, who is played by Gerard Butler. They want his pot of gold, but the leprechaun is an asshole. Lick me crusty Irish taint, he shrieks. Im going to crawl up your mothers cunt and start a campfire. The boys are not amused, and beat him senseless. The leprechaun returns in kind, with his brother popping up from the pot of gold. One thing leads to another, and the leprechauns are shot dead and tossed in the dumpster. Fortunately, Scott purchased a fairy to replace the leprechaun and she sucks dick for gold (see: Precious). Then, Truth or Dare with Halle Berry, who is using match.com to find a man. She does, and she plays truth or dare with him at a Mexican restaurant. It starts small, as she dares her date to cup a biker dudes ass, but soon the Oscar-winning actress is making guacamole with her right breast. Only not before she squirts hot sauce up her vagina. It all ends with her getting botched plastic surgery and inviting him home to have sex. Its funny because Halle Berry is ugly.

Lets leave it there. No sense in telling us about the final installment, right?

But its Victorys Glory! Starring Terrence Howard as an inspirational coach who tells his 50s-era all-black basketball team to kill the white guys because they have smaller penises. Because nothing says 2013 like jokes about big black cocks. Youre black, theyre white  this aint hockey! The final score is 103-1, theres a slow-clap, and ex-Denver Nugget traitor fuck motherfucker Corey Brewer says his lines with all the confidence he puts into his outside shot. With sudden fury, the movie ends. Seventy-six minutes is all she wrote. 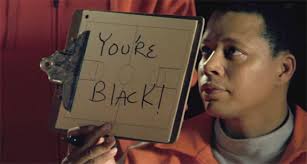 As sure as my own hasty wrist-cutting event in the tub.

Oh please, youll be back.

The director of Precious has a new movie coming soon. The Butler. Oprahs in it, and John Cusack is Nixon. Funny how the review has already been written.