So I guess the first question is, are there 2 GUNS in this movie as advertised?

Well, yes, the title characters each carry a gun, and so there are 2 guns total carried by the protagonists. Or you could go with the figurative gun, in which case each of the main characters are gunmen, or ‘guns’, so there are two of them as well. So there is that.

But then the 2 Guns each carry a gun, making 4 Guns.

RED FUCKING CARD! THERE ARE ONLY 2 GUNS IN THE TITLE AND WE HAVE 4 WHAT DO WE DO WITH THE 2 EXTRA GUNS

I suppose they dispose of them properly, and being unarmed then we are back to 2 Guns. In any case, a DEA agent and a naval officer –

What do you want? The guns can’t walk around by themselves –

ACCURATE GUN COUNT AT ALL TIMES

Then they use shovels. The naval officer uses a sanitary napkin.

2 SHOVELS. GREAT TITLE. I WOULD GET SO MUCH UNDERAGE ASS WITH THAT.

Working to infiltrate a drug cartel, the ‘2 Guns’ are on the run after a botched –

MAKE THEM PACIFIC RIM ROBOTS THAT ARE WALKING GUNS.

Love to, but the two agents are now on the run and discover they were each undercover – 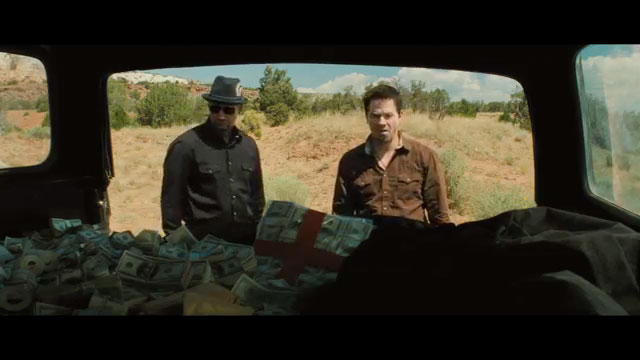 BECAUSE THAT WOULD BE AWESOME. THE DRUG CARTEL WOULD BE FUCKING SMASHED. GUNS BLAZING, GORE FLYING, THEM SHITS WOULD BE PLASMA.

Agents. And now they. Look, the movie would be over in five minutes if they were in robot suits.

A fair point. I guess they are infiltrating a –

The poster may be less than accurate at portraying –

I had a suspicion. The action is perfunctory, the dialogue is “Tough, tough, guns, tough” followed by “Grr, tough, balls, code”, and a hilarious joke involving cops and donuts – I never made that connection. It was hilarious!

Still bent out of shape about the guns.

There’s a hundred guns, a billion bullets, and everyone on the planet is a tough guy with a gun. The more they shoot, the less I care. Now in theaters, with all the other movies about guns.