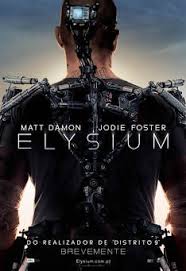 A good solid action movie with plenty of interesting subtext and raging badass in Kruger.

Elysium is a lot more fun than a left wing action film about immigration has any right to be, though the reviews for this one seem preoccupied with how it isn’t District 10. Let’s have a bash at some of the scribblings on the matter:

“The action is bludgeoning.” – Edelstein, New York Magazine
Fuck you. Two men with robot suits beating the ever living fuck out of each other tends to involve bludgeoning. Because action movies have that stuff. It’s really neat! Also, fuck you.

“It’s like one of those bad ‘Star Trek’ episodes” – Whitty, Newark Star-Ledger
First of all, Star Trek was the greatest thing that was ever on TV, rich in allegory and with a keen eye for using sci-fi to look at what it means to be human. I don’t recall the tribbles taking a grenade to the face, but whatever. He wants his movies free of political leanings, I guess. Fine, enjoy Iron Man vs Robin or whatever critics pretend to like when it is finely polished. You Jersey shit-swilling fuck funnel.

“Poorly conceived characters and a lack of wit. Too many questions are left unanswered.” Bloom, Journal and Courier.

Such as what? Where does the shit go on the space station? Do the exosuits come in mauve? And what is poorly conceived here, exactly? The characters are sketched so you can read something into them, instead of having a full dossier handed to you via exposition. One question I can answer for you, Bloom. Know what? Fuck you.

Elysium has little in common with District 9, other than a political backdrop of a division in society that creates a dangerous and unstable world, and a generally rugged sensibility. Every set looks like people live there, and is either full of trash or appears functional. The acting seems like a lot was made up on the fly, since the actors had significant input into their parts. And the real fun is all about the details. Blomkamp put a lot of time into designing guns and ships and whatever is designed to rip limbs out of sockets or just scatter body parts to the four winds. The settings are fully realized, particularly the artificial beauty of the Elysium space station. 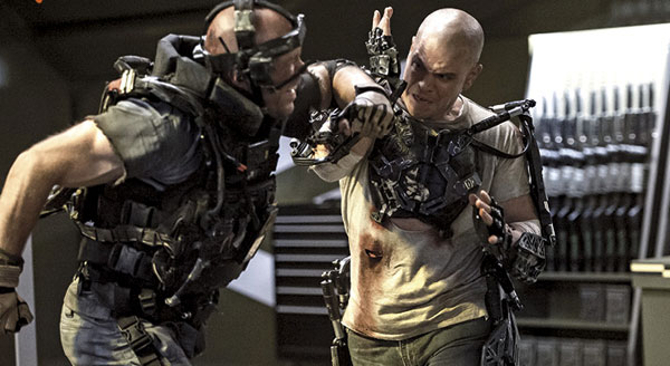 Sharlto Copley is the MVP, as his Kruger devours the film whole. Whenever he is on screen, he seems as likely to kill his audience as anyone on screen with him. Whether stirring steaks on the braai with his ninja sword (no way he cleans that between bisecting motherfuckers) or gleefully having bolts drilled into his ribcage, Copley creates a character that raves and rants in a thick Afrikaans accent and gives no fucks as to whether you are following it. Even eating a bomb doesn’t stop him. The only complaint I have is that the movie did not give him three hours in which to murder by hand or high explosive.

The best part of Elysium are the little details. A lot of what drives the plot is the use of med-beds that repair the human body in seconds based on a person’s DNA. Every citizen on Elysium has one, and uses it just to tune things up, reverse aging, whatever. Meanwhile on Earth millions suffer broken bones, leukemia, sepsis. Even a limited number of these things would vastly improve quality of life (or make healthier workers), and the film makes it evident that they have the beds to spare. But they are never made available. Their value, and the value of anything in short supply, is in denying them to people. Otherwise such a medical miracle would be nothing greater than air or water. Jodie Foster plays a Secretary of Defense from the Dick Cheney mold, and she sneers her way through it as one would expect. Strangely, she elects to speak English as if she learned it as a third or fourth language. Most everyone wealthy delivers a stilted version of English as though actual words were distasteful. This suggests human interaction itself is held in contempt, and serves to make Foster and her fellow citizens that much more reptilian. And Kruger provides considerable food for thought. He kills at will and has a military gunship at his disposal, yet he spends his days walking around in a sack and picking through garbage for food. On a moment’s notice, though, he snaps out of hobo mode and shoots down fucking spaceships in low Earth orbit. Just fantastic. 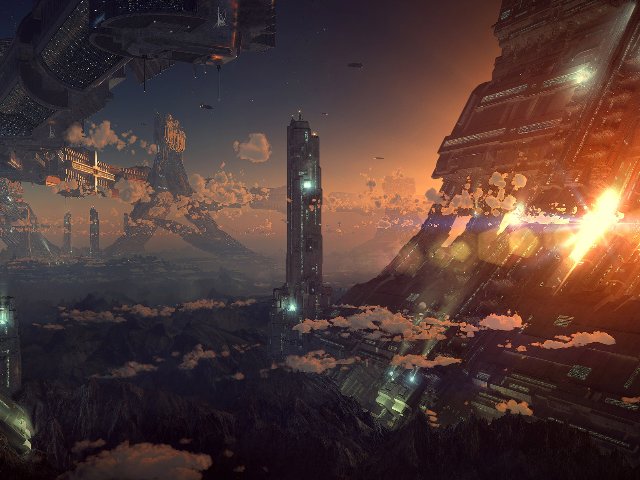 Blomkamp had no desire to be subtle with Elysium and its discussion of immigration. No need for it, really. Any nation that owns will be inundated by people who do not. Any attempt at separation, even by hiding tennis courts in space, is doomed to failure. The price for inequality is to forever face the barbarians at the gates. Even if screeds like this aren’t your thing, bone-snapping body-part scattering action fucking well should be.