Home / Reviews / Movies / ONCE UPON A TIME IN MEXICO

ONCE UPON A TIME IN MEXICO

Written and Directed by Robert Rodriguez

Jonny is at the end of his rope…

Mini-Review for the people in the theater who clapped at the end of this movie/were bothered by all the subtitles:

You’re an idiot and you’re fucking retarded!!! Don’t have children,
cause they’ll be as dumb as you and then what chance will they have?
Fuck you, fuck Hollywood, fuck Robert Rodriguez and fuck Once Upon A Time In Mexico.

Unfortunately, in our lifetimes, we are going to see many bad
movies. It is basically unavoidable. The medium that is film is an art
form that the whole world loves. We want to watch movies. Given enough
free time, the average human being could watch movies easily for twelve
hours straight. Wouldn’t even be a problem. We like movies so much that
we’ll even watch bad ones, often. Defining exactly what a bad movie is,
like defining pornography, is difficult. I know it when I see it. I
just watched Once Upon A Time In Mexico; I saw it.

We have a little pet project here at Ruthless called The Ruthless Guide To 80s Action.
In it we essentially make fun of all the dumb, overly violent,
homoerotic action movies that so owned the box office during Reagan’s
reign of terror. Robert Rodriguez, the director of Once Upon A Time,
ought to read our guide. Because his new movie (like many of his
movies) fucking sucks. It is gratuitous, preposterous, disingenuous,
mendacious–you think of a derogatory word that ends in “ous” and I’ll
bet you twenty bucks you can apply it towards Once Upon A Time. 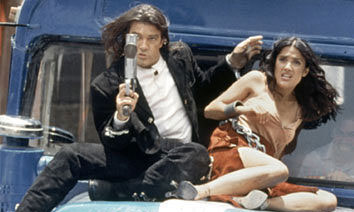 Lets start with gratuitous. I’m trying to think if I have ever seen a more violent film. Safe to say that City of God looks like You’ve Got Mail
by comparison. I don’t think I have. When I was twelve years old I used
to always try and get my dad to watch movies with me. But see, kids are
stupid, so I really honestly wanted to watch trash like Raw Deal.
Invariably, my father would refuse, explaining to me that he couldn’t
stand movies with guns in them. I never understood. Now, don’t get me
wrong, my dad was not some pinko-commie-treacherous-liberal-democrat
who wanted to go door-to-door and round up the white man’s weapons. Far
from it. In fact, my father damaged his hearing by firing a rifle at a
bullet casing, which he happened to be holding in his other hand with a
pair of pliers. No, the older I get the more I realize that my dad
hated movies with guns in them because by and large, they are fucking boring.

Meaningless death after meaningless death after meaningless
death. It would almost be nauseating, but by and large my attention
wanders and I begin wondering why every teenager in every movie theater
I’ve been in over last three years is on their phone while the movie is
playing. Has ADD gotten that out of control? I digress… Once Upon A Time In Mexico
is so banally violent that even serial killers will be turned off. Or
sleeping. Violence can be done well, violent acts can be romanticized
by the camera to great affect. Look at the films John Woo made in Hong
Kong (like Hard Boiled). Violence is their core, their dance,
their [insert fancy French word meaning “reason for being” here], yet
they are compelling. Since everything in Once Upon A Time was
done for the sake of style, nothing had meaning, nothing captured my
fancy, none of the God only knows how many deaths I witnessed had any
impact on me, or anyone else in the audience, at all. Using the matrix
we developed in the Action Guide I would guess that around four
hundred people meet their maker in this movie. That’s like two a
minute. That’s insane, that’s boring and that is the very definition of
gratuitous. 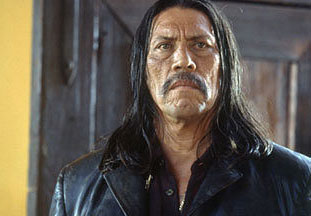 Once Upon A Tome In Mexico is preposterous, and I can prove
my assertion by giving the following plot summary; Johnny Depp is a CIA
operative working in Mexico. He wants to find El Mariachi. He gives Cheech Marin $10,000 in a Clash Of The Titans
lunchbox. Antonio Banderas revises his role as El Mariachi and is
living on top of a church, hanging out with a bunch of luthiers who
live below and make their guitars in tents. Danny Trejo shoots
Banderas’s friend, who two minutes earlier gave Banderas a guitar, for
essentially no reason. That of course makes El Mariachi go to work for
Trejo, who is really working for Depp. Banderas begins having
flashbacks about his dead wife (Salma Heyak) and this really mean
general guy that killed her. Willem DaFoe is this drug cartel dude who
for some reason has hired the mean general to kill El Presidente. Cause
he’s the bad guy. But Depp wants El Mariachi to kill the mean general
guy. El Mariachi is very sad all the time and thinks about nothing but
avenging his wife and daughter’s deaths. Oh, El Mariachi might be a
ghost or a phantom or something.

El Presidente, Banderas, DaFoe, Trejo and every other
principle in the movie except for Depp and Rourke (more on Rourke in a
bit) are all supposed to be Mexican. El Presidente, Banderas, DaFoe and
every other principle in the movie, including Depp and Rourke, all
speak English. I love that American audiences are so dumb that the
president of Mexico has to speak English, otherwise we’ll bitch about
subtitles. USA! USA! Continuing. Turns out, everybody is screwing
everybody else and Johnny Depp (finally) sticks his hand up Cheech
Marin’s ass. Um, Banderas kills pretty much everybody, except that
towards the end the camera is cutting so quickly that you can’t really
tell what is happening, so maybe this retired FBI agent killed some
people. Maybe he killed DaFoe? No one knows. At the end, Heyak asks
Banderas what he wants from life, to which he answers, “To be free.”
Which is fucking insane!! Dude, you just murdered like two or three
hundred people. By yourself! You’re a sociopath. You may as well have
answered her question by saying, “I want to be an alligator.” Oh yeah,
the very, very last scene is Banderas kissing the Mexican flag. Which
makes as much sense as having Jeffrey Dahmer singing the National
Anthem at the end of a biopic. 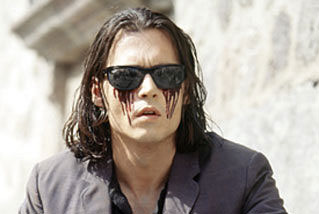 Not only is he rolling over in his grave,
but Brandon Lee never got no check
for $10 million

On to disingenuous. This one is a little trickier because I covered
much of it above, and you really have to think about the bullshit
politics Rodriguez is slinging in Once Upon A Time, and you
really shouldn’t have to do that. No fun. I’m going to try anyhow. At
one point the mean general’s troops are attacking what is presumably
the capitol of Mexico. El Presidente lives there, at any rate. Anyhow,
“the people” take to the streets to defend El Presidente and his
regime. I repeat, “the people.” You know how conservatives are
constantly attacking multicultural studies programs, and essentially
post-modernism as a whole? [Ed Note: See The Closing of the American Mind
by Allan Bloom] You know, with sentiments like, “How come you have
African American studies, women’s studies, Latino studies, Native
American studies and gay studies, but you don’t have straight white
male studies?” The battle that takes place at the end of this film, at
least to me, perfectly exemplifies why Lincoln’s party is so hopping
mad at the ivory towers.

The attack takes place on Dia de los Muertos. Of course in the tall, tall tale that is Once Upon A Time In Mexico,
it is only referred to as “Day of the Dead.” Cause we’re so stupid. As
a result of the battle going down on this day, you’ve got all “the
people” out marching in the street already. So when the mean generals
troops start firing upon them, “the people” do stuff like mount .50
machine guns on taco stands (I swear to God) and begin killing the
fascist oppressors. How indigenous. However, one scene just absolutely
took the cake. A middle-aged woman is standing in the street wearing
that kind of multicolored skirt you would see tacked to the wall at El
Torito. She has bandoleers draped over her shoulders and has a
six-shooter in each hand. You can just feel the purity of her
ethnic-essence as she begins to fire away at the oppressors. It was
hard to hear exactly what she says because of the bazookas and tanks
firing all around her, but I think she said, “Maya Angelou, Toni
Morrison, the Goddess, this one’s for you.” It was all just silly
pandering to some false idea of a pure, innocent “people,” who will
nobly fight for what is right and just and true. That given the chance,
they will kill indiscriminately on the side of the great Coyote spirit.
Absolute phony-bologna bullshit that plays into the minds of young
folks who think Rage Against The Machine is subversive and couldn’t
tell you the continent Che Guevara was from, let alone the country.
Meanwhile in real life, writer/director Richard Rodriguez probably
wipes his ass with hundred dollar bills. 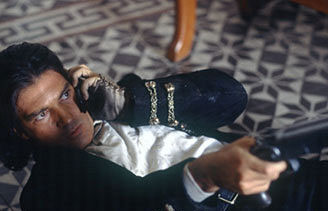 Kids of today can relate to mass-murderers
on cell phones

Mendacious means pretty much the same thing as disingenuous, so I’m not going to get into it. Once Upon A Time In Mexico
is just a disaster that leaves you feeling numb and sad. The only
honestly nice thing I have to say is that I really like seeing Mickey
Rourke up on the big screen again. Can’t somebody just hand him a
decent script already, one that stars him? I digress. Don’t see this
movie. Seriously, you’d be better off renting and watching McBain.
Come to think of it, the two films basically have the same plot. If
nothing else, hopefully I have discouraged you from filling your brain
with one more bad movie.