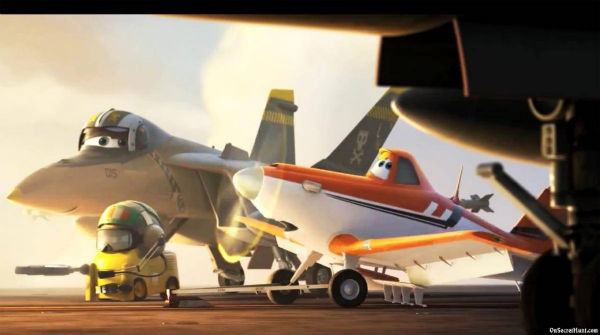 All you need to win is to want it badly enough. Being willing to be reconstructed as an unholy Frankenstein by dubious Mexican chopshops also helps. 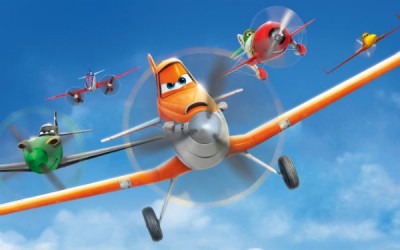 Fair Value Rating of Planes: -$4.50. If I have to sit through a full length recruitment ad for the US Navy, the least they can provide is either a dogfight or a homoerotic volleyball scene. This film had neither.

I understand the purpose of Disney’s film Planes. For those proto-chimps that we refer to as our progeny, aviation is a wondrous experience, a magical moment of engineering. When they first step into the cabin of an airliner, they want to look through every cabin window, play with every door and lever, mess around with the controls if they can reach them. The RAF can testify from bitter experience that few things can so completely ruin and destroy an airplane as a group of unsupervised schoolchildren. Pretty soon your hyperactive zygotic accidents are kicking up enough of a fuss as to get you and the  missus tazed, bagged, and on a free ticket to cavity search city. And so The Big Mouse has now given adults the film Planes, so we can teach children to hate the experience of flying as much as we do. Children must be taught that flight is a mirthless, joyless exercise of transit, much like riding on a public bus, only smellier, more cramped, and with more security guards. If you need a film to utterly disenchant and disillusion your child about airplanes, you now have the movie that will do it for you.

Do I really have to discuss the plot? A crop-duster dreams of being a racing champion in a nightmarish posthuman world dominated by sentient machinery, trapped in an endless nostalgic loop for the industrial design aesthetics of the 20th century. He’s not a character, and he doesn’t meet or interact with characters, only with the shallowest of stereotypes. It’s a bunch of soul-less toys being flown around by adults pretending to remember what playing with toy airplanes was like. Plastic frames and plastic dialogue from out the arteries of plastic hearts. Fuck it, I’m not going to waste our time talking about the film. 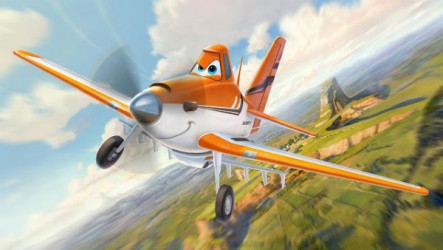 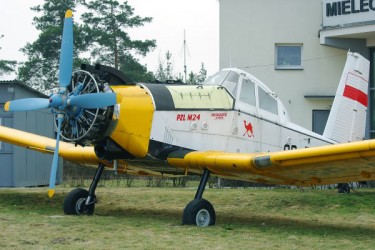 PZL M-18 Dromader – ‘Dusty Crophopper ‘ – our protagonist is a communist era Polish crop-duster plane. An ugly, un-streamlined plane with a standard 980hp radial powerplant, Dusty represents the film’s central themes of the socialist celebration of the agrarian laborer triumphing over the decadent militarists and capitalists of the west.  He’s a triumph of the people’s design, dumping beneficial herbicides and pesticides to combat the people’s enemies, such as the vole, and intrusive Western grasses. Like many I felt that Dusty’s rambling 2 hour speech about the virtues of collectivized farming was a distraction from the film’s plot. 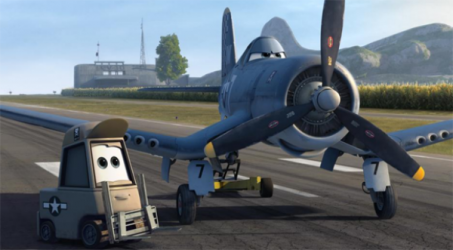 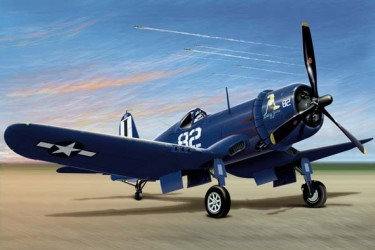 Vought F4U Corsair, ‘Skipper’– by all rights, this gull-winged plane should have dominated everyone and everything. A combination of a 2000 hp radial engine and six .50 caliber machine guns led this to be the deadliest fighter in the Pacific- what the Japanese called “The Whispering Death”. Instead, we get an impotent, emasculated, veteran, and the most hilarious ‘slaughter of a group of American troops’ sequence since Peter Jackson’s Meet the Feebles. This character’s presence was like the polar opposite of the dramatic rule of Chekhov’s Gun. If you are going to feature an F4U Corsair in your film, you’d fucking better make sure that there is a long burst of magnesium tracer ammunition blazing from blue wings, perforating through enemies. What a waste of a war machine. 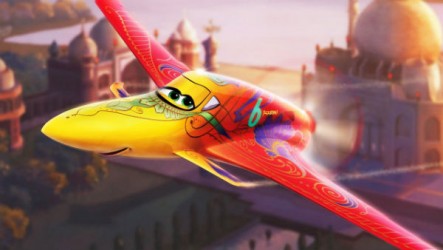 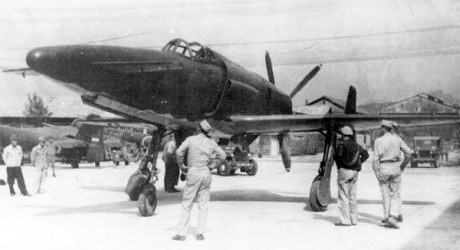 Kyushu J7W Shinden, “Ishani”- The Indian love interest figure is a late-war Japanese design of a canard-type. Though short ranged, the Shinden featured a heavy cannon armament and high speed that could have made it a plausible threat against American bombers. However, difficulties with the controls surfaces and cooling systems kept the Shinden from getting beyond the prototype stage. Ishani is supposed to be the beautiful exotic Asian plane, and she gets a sequence that’s a clear cash-grab for the Indian market. I was probably the only person that grasped the irony of having a Showa-era warbird as the Indian- it’s like having the Polish character being represented by a Stuka. 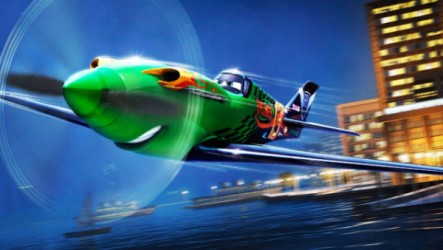 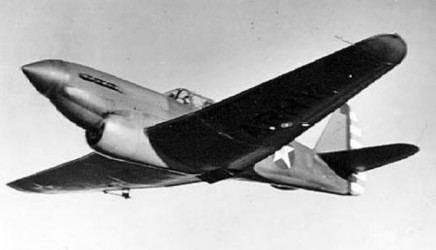 “Ripslinger”- a ‘Custom Composite’– So the villain is the major plane in Planes that is claimed to be an original design. Nice try, Disney, but – Ripslinger is a Curtiss-Wright XP-60C-1 with a contraprop. What, were you afraid of angering the Messerschmitt conglomerate? Allow this aviation nerd to suggest a few credible piston-powered planes with menacing lines: The Hawker Typhoon; The Focke-Wulf 190D Werger; the Fiat G.55 Centauro. What can be said of Ripslinger? The P-60 was the swan song of the venerated Curtiss-Wright company, America’s first airplane company. It was an evolved, higher powered and streamlined P-40 Warhawk. Of course, Curtiss’ decline was partly related to a Harry Truman-led exposition of a coverup of defective engines. It wasn’t America’s first military boondoggle, but it set the tone for the Starfighters and Joint Strike Fighters of the future decades. 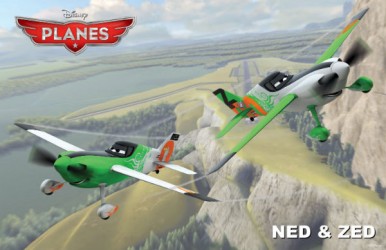 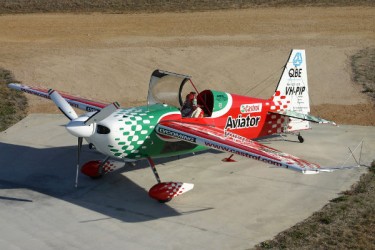 Zivko Edge 540, “Ned and Zed”- the diminutive minions of Ripslinger appear to be Zivko Edge 540s, the current aerobatic champions of the modern racing circuit. Weighing less than 1600 lbs, capable of a 420 degree roll rate, the planes are the signature of the modern Red Bull Air Race World Series. 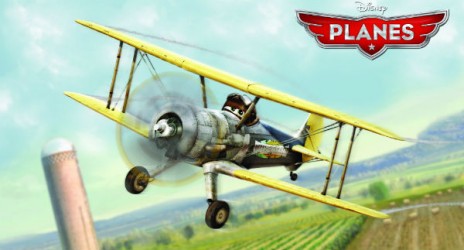 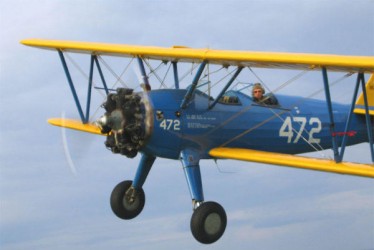 Model 75 Stearman Kaydet – ‘Leadbottom’ – The sensible co-worker of Dusty, who actually understands the limitations of being a cropduster. Leadbottom has a cowled radial engine but other than that is a classic trainer/ cropduster airplane. An airshow staple, the Kaydet can only manage 135 mph, but has  aerobatic agility to spare. 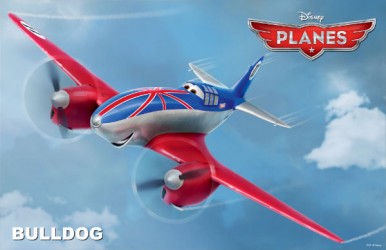 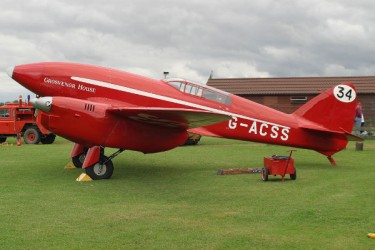 De Havilland DH. 88 Comet, ‘Bulldog’– might I, as a transatlantic transplant, make a suggestion? Brits don’t call every Yank character ‘Eagle’ or ‘Sam’- might you bother with something other than ‘Bulldog’ for once? Anyways, this is the plane that truly fits in with the plot of the story. Sir Geoffrey De Havilland was a defining designer of British aviation, as influential as Kurt Tank was to Germany, or Kelly Johnson was to American aeronautics. The Comet was the champion endurance flyer of the Empire, winner of the 1934 London to Melbourne Air Race. Anyways, the character gets a few lines, but he’s a comic Brit. As stereotypes go, the worst is yet to come. 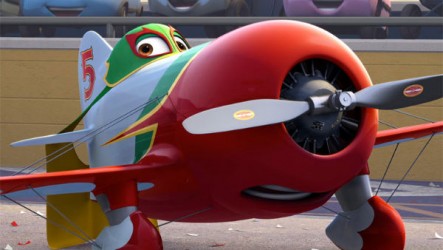 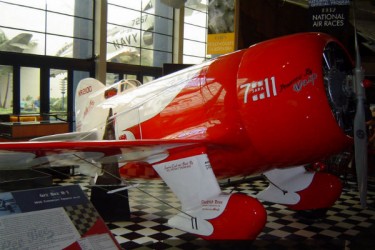 I should have called out Despicable Me 2 on this as well. When you have an African-American character behaving in a comically racist manner, that’s known as minstrelry. What about a stereotypical Mexican character? One who wears a luchador mask, talks about el passion and el macho? That even lets out the periodic ay-yi-yi? Maybe we should call that trope El Bufon. Similar connotations. Maybe that sort of cheap racial stereotype should be acceptable, maybe it shouldn’t, I lack a position to say. But Carlos Alazraqui is one rancid burrito. The Mexican stereotype is a Gee Bee, a Massachusetts made monoplane sportster.

Ironically for a plane that was more power plant than wing, the Gee Bee wasn’t that powerful. Nevertheless, it was the 1932 Thompson Trophy champion, topping out at a speed of 294 miles per hour. The Gee Bee’s stocky build symbolizes the obesity now epidemic amongst latinos/ chicanos, it’s large power plant represents the emphasis of macho brute strength over other characteristics, and it’s comical near tail position of the cockpit is a metaphor for the low-brow and regressive mindset of our Southern neighbors. This character is offensive to Mexicans, offensive to Yankee airplane racers….a Granville Gee Bee is about as Mexican as the Taco Bell Chihuahua, and also about as annoying. This is one plane I’d like to see as smoldering wreckage planted in a hillside. Which considering the handling characteristics of the Gee Bee, isn’t likely to be very far away outcome.

Conclusion If Pacific Rim was a film that made the ghost of the seven year old me dance, then Planes is the film that made my inner child groan. It’s like going to an air show, and finding out the only planes are going to be Cessnas and Piper Cubs. Planes may show off a lot of cool planes, but it never shows why they’re cool, it never shows why we should care about any character, and it never once conveys the rapture and wonder that a person can experience in flight. Where has flown your soul, Klay Hall?