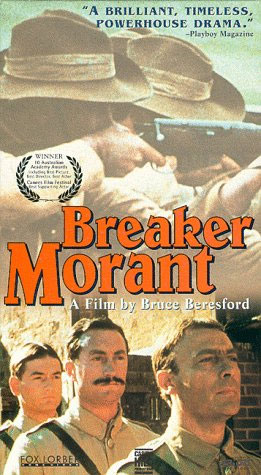 We’ve really got some excellent readers here at Ruthless. Like way better than the tools who read your blog. Yeah, you. Some reader wrote in and told us to review Breaker Morant. Why? Well, aside from the fact that Breaker Morant on its own is a fantastic movie, our reader felt that in the light of the Abu Ghraib abuse scandal, that someone here at Ruthless should watch Breaker Morant. I guess I should tell the rest of you what Breaker Morant is about so that you can then scratch your heads and say, “what the hell does a turn-of-the-last century period piece about three court marshaled Australian soldiers during the Boer War have to do with prison abuse in Iraq?” Like I said, we have really excellent readers.

In 1901, three Australian lieutenants of the Bushveldt Carbineers, an elite group of British (Crown) commandos created to fight the hated Boers on their own turf and terms are accused of murdering half a dozen Boers as well as a German missionary, Reverend Hess. What is not mentioned in the court marshal is that all three soldiers, Lt. Witton, Lt. Handcock (Bryan Brown) and Lt. Harry “Breaker” Morant were simply following orders. Again, the three men were following orders given to them by the top military man of the government now accusing them of wrongdoing, Field General Horatio Kitchener. More importantly though, the entire trial is a sham, a cover up. Basically, the Germans are looking at the death of the German missionary as an excuse to enter the war on the side of the Dutch. In order to prevent this, the Brits opt for a kangaroo court and the sacrifice of three of its “colonial” own. And of course when you get to bottom of it all, no one is doing any fighting for anything that might be remotely perceived as noble, no. As Lord Kitchener says, “Needless to say, the Germans couldn’t give a damn about the Boers. The diamonds and gold of South Africa they’re after.”

Now of course the parallels between Breaker Morant and the fucked up situation in modern day Iraq are not exact, but they are pretty damn close. Our own military, in the face of the worst public relations nightmare since I don’t even know when, is putting seven soldiers (mostly untrained reservists) on trial for prisoner abuse, which is so obviously institutionalized torture only a moron (or our President) would think different. Wait, Bush is a moron. I mean if you really think that the worst and dimmest from West Virginia are going to know a damn thing about what exactly is the best way to humiliate people from Arab cultures, you have a screw loose. These yokels couldn’t even find New York on a map. Anyway, the whole damn scandal goes all the way up to Maj. Gen. Geoffrey Miller of Guantanamo Bay fame who suggested “prison guards can help set conditions for the interrogation of prisoners.” And I am 99.9% certain that Rumsfeld knew everything. Probably even some folks higher than he. So, a few lowly soldiers are sacrificed for the “greater good.” Breaker Morant my friends.

While I recommend — strongly — that all of you watch this wonderful movie, I do not want you to do so simply because it bares relevance to our current clusterfuck in Iraq. Of course it does, but it is much more than just a metaphor about how inherently corrupt the goons running our country are. Unlike our accused soldiers, the three (well, two of the three at any rate) Australians are awesome! Indignant, strong-headed, hot-tempered and most importantly innocent on all counts (except one, but you’ll have to watch to find out). Their actual crime is nothing more than being in the wrong place at the wrong time. Morant himself is something of a renaissance man, as one character points out. He is a poet and got his nickname “Breaker” because he used to break in horses. He is also something of a singer. More importantly, he is a cantankerous S.O.B. who refuses to go down without a fight. Case in point, just before the firing squad gets him, Breaker shouts, “Shoot straight, you bastards — don’t make a mess of it!”

Even better than Morant, is his hot-heated, hot-blooded colleague Handcock. I don’t know what you would call a cockney in Australia, but Handcock is exactly that. When the three accused men are contemplating the death penalty that all are facing, Handcock blurts out that the worst thing about dying is that there will be no more “Sheilas.” I must say that the script for the film is masterfully written and the dialogue just sizzles. Or snaps. Or whatever. It is real good. For another instance, the most serious charge facing the men is the murder of Reverend Hess. Handcock’s excuse is that he was getting it on with not one, but two Boer women, back to back. He even gets written depositions from each of the women explaining that indeed he was busy on the day in question. When the leader of the court marshal says, “Mr. Handcock, these are married women!” Handcock responds, “No one’s ever missed a slice off a cut loaf.” I’m still smiling at that one.

Needless to say, every single performance in Breaker Mornat is first rate. The story is compelling, moving and true. It is a wonderful indictment of military culture, British or otherwise. I’m surprised that this film is not better known. Then again, I usually hear, “No, I’ve never seen Dr. Strangelove” once a week. So surprised, I shouldn’t be, but I don’t even hear film geeks talking about Morant. But they should. Maybe because us Americans are too “daft” to relate to a war film that doesn’t involve us. I mean, South Africa? Boers? Never heard of ’em. That of course is part of our country’s larger problem. Regardless, let me leave you with what is my favorite part of the film, and another example of the good humor, intelligence and humanity that runs all the way through Breaker Mornat. Just a little background, Handcock and Morant are on their way to be executed.

Sentry: Do you want the padre?
Morant: No, thank you. I’m a pagan.
Sentry: And you?
Handcock: What’s a pagan?
Morant: Well… it’s somebody who doesn’t believe there’s a divine being dispensing justice to mankind.
Handcock: I’m a pagan, too.