Yet another film about personal demons and haunted houses? Does it open with an ominous shot filled with thunder, lightning, and rustling leaves?

Let’s not forget the frightened kids lying awake in bed, one of whom is (naturally) freckle-faced and wide-eyed. But don’t you see, this is the first known film to tackle the very idea of the Boogeyman — that he actually exists and the millions of kids who have been afraid of the dark all these years haven’t been making shit up.

So who’s this Tim Jensen fella and why should we give a shit?

I would never argue that we should care, but he’s a troubled young man who, as a boy, watched his father get sucked into a closet by the Boogeyman. He’s been brooding ever since.

Brooding? With a great job, a hot girlfriend, and one fine set of hard abs?

Yes, despite working for a top magazine and being attached to a blond bombshell, he can’t forget that night long ago, and what’s more, he keeps seeing his mother in bizarre visions.

Who doesn’t? But, what’s his mother got to do with it?

His mother was also hit hard by the disappearance, and she’s been reduced to madness and bad hair ever since. In addition, Tim keeps waking up from a nightmare lying next to a rotting, sore-ridden old crone. Now we know how George H.W. Bush feels each morning.

So is it true that our hero spends most of the movie opening closet doors?

At least 2/3 of the time, he’s peering into dark spaces and turning creaky doorknobs. Each time he manages to get his entire body into the closet, he has a panic attack and mistakes hangers for claws, or slacks for demonic teeth. Finally, though, the Boogeyman shows up and starts his killing spree.

Are you sure? What about the character who says, “It’s just a story — it’s not real.”

Despite the power of that strikingly original statement, the Boogeyman does exist, and cannot be defeated until he is confronted directly.

One would think that the final battle between Tim and the Boogeyman would be a grand event, complete with fire, wind, and the souls of the damned being released from their hellish prison, but instead, our young hero manages to dispatch the great evil with a strong kick to the face. The karate move sends the Boogeyman spiraling back into the closet, never to be seen or heard from again. Unless…..Actually, I’m not sure this film made enough money for a sequel. 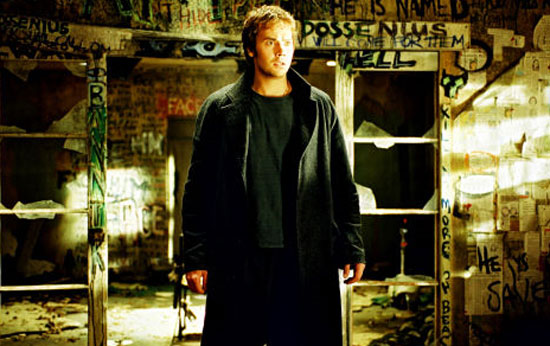 Sounds perfectly dreadful. I imagine the clichés were out in full force?

Let’s see here…..There’s the Old Place That Holds So Many Memories, which is where dad disappeared and the confrontation with evil must take place. Or the fact that the surest sign of dementia in the movies is an unshaven face. And of course, we have the time-lapse photography to indicate, uh, nothing really, except that all budding filmmakers must try it at least once. And then there’s The New Girl Who Helps Our Hero, who is portrayed by Emily Deschanel (sister of the vile Zooey). Her role is to take Tim away from his troubles by being eccentric, fun, and a little zany (read: annoying as fuck). Fortunately, Tim’s blond girlfriend is slaughtered by the Boogeyman, so he never really has to choose between them. And I’ll refrain from any further discussion of the flash edits and bursts of sound that pass for style.

What about unintentional hilarity?

My favorite was the comment by Tim: “Oh my god…..that’s it…..that’s the motel.” Not funny on its own, but one second after he says this with the drama of a Shakespearean villain, we see the word “Motel” reflected in Tim’s windshield. No name, just Motel. Not funny? Whatever. Oh, and then there’s this exchange between Tim and some creepy little girl named Franny:

Tim: “Count to five. When you’re scared, count to five. Sometimes it works for me.”
Franny: “What happens when you get to six?”

Again, it’s all in the delivery. That said, we also know that counting to six will factor in the story later, although so awkwardly that it will be impossible to give a fuck. And dude, I liked how the Boogeyman wrapped Tim’s uncle in cellophane. 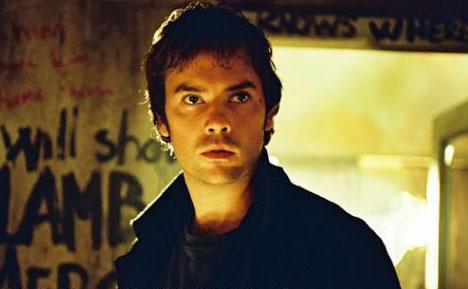 Jesus, what happened to allegorical horror films? You know, thrills and chills with subtext and social commentary?

Dead and buried, young ones, along with truth, justice, and any semblance of the American Way. Here, the universe of the movie is closed, locking out the sort of fun we might get with, “Hey, isn’t the Boogeyman a dead ringer for Dick Cheney? Clearly his appearance symbolizes the fears we all have of the military-industrial complex,” or some such nonsense. George Romero was one of the first to scare us while teaching us a lesson, and in many ways, we’ve never come as close since. Hell, even the disaster movies of the 1970s hammered away at our collective hubris. And with America in such a state of harmony and bliss these days, you know damn well we don’t have any problems here.

Check out Matt Cale’s 10 Worst Films of All Time.