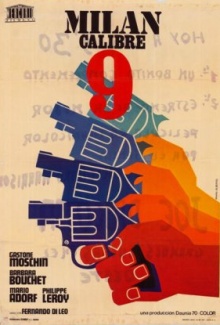 The mob tries to recover stolen money from the protagonist as the police squeeze him to rat on the mob.

Yes, but no tagline. Quentin Tarantino is quoted on some DVD covers praising the film, which I guess places it on his personal pedestal, alongside two billion other movies.

The mob lost a shipment of money years ago, and the only suspect alive is a tough, bald bank robber that has just been released from jail. He claims he’s innocent and wants to be left alone, but it’s useless: the mob wants to break him to confess the location of the stolen money, and the police are pressuring him to rat on the mob. Will he survive this hairy situation? Is he really innocent? And is his hot dancer girlfriend all that trustworthy…? 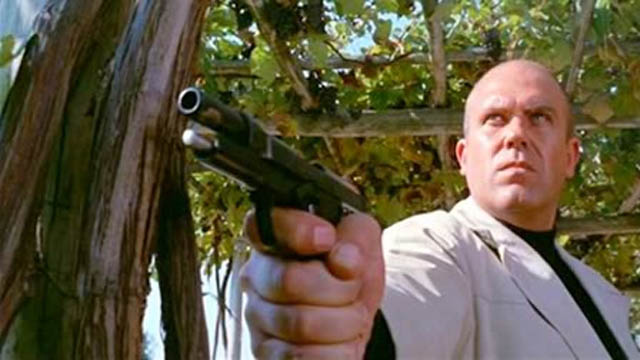 Oh boy. Played by the great Mario Adorf, Rocco Musco has to be the Bennett of the polizioteschi genre and Italy’s biggest hero since Giuseppe Verdi. Rocco (I’d rather call him Rocco) has a ludicrous mustache and the most oily and unkempt hairdo I’ve ever seen on a presumably employed person, possibly combed with sweat and mozzarella residues from his breakfast. Even when dressed in a suit and sharing the frame with some destitute Sicilian guy in a wife beater, he looks the skeeziest of the two. By far. Some sort of mid-level mob enforcer, Rocco spends most of the film senselessly taunting the main character and being a blustery, petty, inexhaustible loudmouth capable to annoy even the ghost of Otto Skorzeny. But really, all you need to know about Rocco is the fact that, when he finds out the mob has been ripped off, his first, instinctive reaction is to spit. Not one concentrated loogie directed to his side, no, but several flood-like streams of saliva covering the whole area in front of him. Football matches against the Italian national team were never the same after this film was released.

Besides Rocco, there’s this heavy wearing a trench coat who keeps twitching one of his shoulders every two seconds. Either he’s a dismal Method actor, or there was something itching real bad under his armpit. He spits over some pigeons threatening to crap on his trench coat, too.

The opening of the film is a brutal mini-masterpiece showing the botched money shipment and the subsequent retribution. We see a package full of bills passing through several ordinary-looking messengers. After reaching their destination, the bills have somehow transformed into blank pieces of paper and the couriers receive the expected friendly visits. One of them is getting a shave in a barber shop; Rocco and the trench coat guy kick the barber in the nuts, and slash the messenger’s face with a straight razor while the poor fellow is looking at his reflection in the mirror. Next, he and the others end up tied together inside a cave and blown up with dynamite. Cue main titles… There’s not much else but the hilarious scene of Rocco delivering poetic justice at the very end of the film. I may spoil plot twists with abandon, but I won’t attempt to spoil that.

One of the go-betweens at the beginning is a woman. Tits briefly glimpsed under her open robe, she’s roughly slapped and thrashed over her apartment furniture, which is not that cruel if you think about the aforementioned guy in the barber shop. Rocco unceremoniously throws a naked prostitute out of a room but somehow forgets to regale her with phlegm. Barbara Bouchet plays the nightclub dancer, so we’re treated to a groovy 70s montage of her gorgeous body contorting on the stage (I’m certainly not complaining). At the end of the film we discover that she’s planned all along to betray the bank robber, so when he arrives with the stolen money he is shot by her Beta male accomplice. Stuck by two bullets, the bank robber is still able to hit her nose with a deadly punch, yet he doesn’t get to call her bitch. Fail!

Most of the time, the police commissioner is wise enough to let the gangsters go on with their business. He just waits to pick up the bodies. He has loud arguments with his college-educated second in command, as the commissioner proffers the typical view of the liberal justice system allowing lowlifes to walk free and the second argues that the system serves to protect the bigger thieves dabbling in politics and big business. To their credit, the filmmakers seem to agree with the second position, but nevertheless it is the commissioner who gets the results. Some things never change, especially in these latitudes.

I counted 22 deaths, mostly by the way of the gun. My favorites are of these two guys that get blown to smithereens so the paranoid mob boss can absurdly make a point; it reminded me of that Simpsons gag involving Patty, Selma and two infected juice looseners.

Even if it doesn’t live up to the pre-credit sequence, Fernando Di Leo’s Milano Calibro 9 is a fast moving and engrossing thriller, with Gaston Moschini in the main role giving the best Jason Stratham performance ever. The film can be credited with having an agreeably amoral stance, but make no mistake: this is not in any way a realistic depiction of the underworld, even if some reviewers like to pretend so just because rocket launchers or belt-feed machine guns are absent. For example, we are supposed to accept that the Sicilian guy is able to infiltrate the mob boss’ mansion by himself and kill a dozen bodyguards with his rusty revolver, merely because he’s old school. Duh… Anyway, let’s not forget what really matters: every criminal in the film dies with the sole exception of Rocco, and for his next movie the director hired Adorf as the main character. As if he wasn’t the true hero in this one. 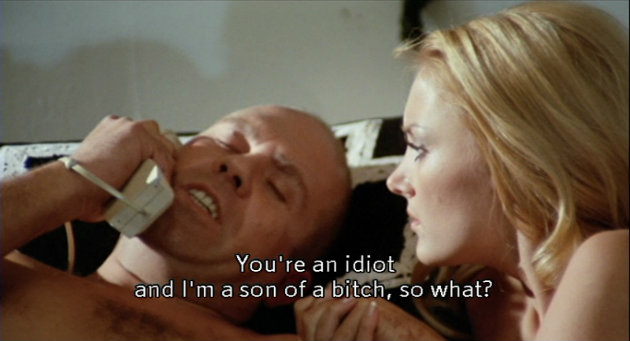 The formerly blacklisted Lionel Stander plays the treacherous American head of the mob, and appears to be having a great time. Unfortunately, his growly voice is lost under the Italian dubbing.

Both. The soundtrack is credited to Luis Bacalov and the band Osanna, so that explains why the main theme is a composite of an ominous, Morriconesque tune followed by a ridiculous rock segue with some guy going huuuuuh-huh! over the guitars. It rules, specially when it is played thrice in less than six minutes during the beginning.