Home / Reviews / Movies / THE HAPPINESS OF THE KATAKURIS

THE HAPPINESS OF THE KATAKURIS

If you think Miike Takashi only makes whacked out over the top, sicko, surreal gorefest horror shenanigans such as Dead Or Alive, Audition and Ichi The Killer, think again. Takashi Miike also makes whacked out, over the top, surreal, horror comedy musicals as well. I left out sicko and gorefest from the latter description as compared to Miike’s other films, as there are only a paltry 4 deaths.

The plot is pretty straightforward. Poppy Katakuri gets the
push from his job as a shoe salesman and so buys a guesthouse in the
country and drags along the whole family to help out. Unfortunately the
first few guests die in very bizarre circumstances. Poppy Katakuri
thinks this will be bad for business. He decides to bury the bodies in
the woods out back so that he can live out his dream of blissful family
harmony. How Takashi handles the corpse removal is not straightforward.
He hammers two or three genres together that simply do not go together
and shock of shocks, makes ’em work. It’s like Shallow Grave meets the The Walton’s with the musical element of The Jungle Book. There’s also a massive nod to The Sound Of Music, indeed the UK and US cover of the DVD re-creates the cover from said film.

Now for the musical numbers. Don’t get me wrong, they’re bloody awful but they’re a total piss take of either:

And as such work perfectly for the film.

There’s a love struck sister, a brother out of prison, a barking
mad granddad (who chuck logs at crows with alarming accuracy), mum,
dad, a Japanese guy who claims to be the son of HRH Queen Elizabeth’s
illegitimate half sister while at the same time a US air force pilot
(yes he IS a con artist) and the daughter of the single-mum sister, all
of who get their 15 minutes of singing fame. They even go
karaoke-tastic at one point asking the viewer to join in with the
singing though you’ll have to be a linguistic smarty-pants like Jaquay and be able to speak Japanese for this bit.

Zombies doing song and dance routines, bodies getting buried in
the back garden, people turning into plasticine for no apparent reason,
crow hating granddads and Japanese Royalty/USAF impersonators might
sound like a whole load of horse shit, but believe me, The Happiness of the Katakuris
is a great movie. I laughed pretty much all the way through. Sometimes
at the humour, sometimes at the sheer insanity of what was going on. It
makes an episode of Neat & Tidy seem positively normal. 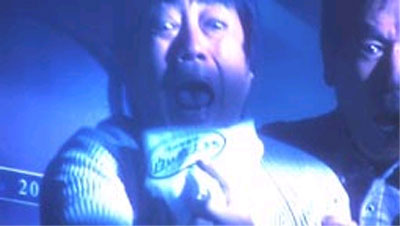 Sure the whole film a total theft/pisstake movie with so many of
its parts lampooning other films, (including Miike’s own), but so what?
Whatever he seems to do, Takashi suckers you in to his world of the
bizarre. Sometimes you laugh, sometimes you’ll spew you dinner onto
your lap with repulsion and sometimes you’ll laugh whilst spewing your
dinner onto your lap with repulsion. Refreshingly in this film he
leaves the shocking gore at home and re-creates the nastiness
(particularly the beginning) through Playdough characters which seem to
morph in and out of their real life counter parts and as such don’t
challenge your stomach in the same way that the same scene shot with
real characters would. I’m pretty sure this tactic was also used to
keep the SFX budget low, especially toward the end, but it doesn’t
detract from the film in any way. Super gore would have just spoilt it.

While this isn’t quite as good as the wire-sawesome Audition, The Happiness of the Katakuris is still a great watch for anyone who’s a tad sick and tired of the
same old same old. This is about the only Takashi film you wont have to
hide from you’re family because they would think you’re some
weirdo/serial killer/sadist sort of freak. They’ll still think you’re
insane, just not a serial killer.