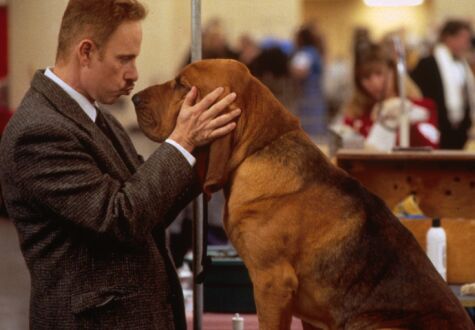 The first time I saw Best in Show I enjoyed the film, but didn’t appreciate the quality it achieved with a difficult scenario.  Many films try to create one comic duo and fail miserably, like Dude, Wheres my Car. This film creates five, plus Harlan, and they all work.  Some are better than others, of course.  My favorite is the pair broadcasting the event–this is where the under appreciated Fred Willard turns in a performance that reinvigorated his career, culminating in his recent PSA spots on hulu.  When all of the duos converge and the film only gets better.

Maybe the film works because things are divided up.  I’ve often wondered why it seems to be so much more difficult to make a funny movie than a funny TV show.  Perhaps it is because a movie typically relies more on a central protagonist and a comic protagonist usually cannot carry a story and continue to be funny for the duration of a film.  But no one character has to carry this film, rather it is carried by the best moments of each of a dozen characters.  If each chips in two funny moments you’ve got a very funny movie.  In any case, Guest, Levy and the rest of the cast, who actually wrote much of the material through improvisation, deserve credit for making a very good, very funny film.

The goodies are hit and miss.  The twelve deleted scenes are a hit.  Its easy to see that they dont fit in well with the rest of the film, but many rank with its funniest scenes–especially Harlans collection of well, see the DVD.  The commentary is a miss. It has some laughs and interesting information, but most of the time it sounds as if Levy and especially Guest are bored and happy to pass the feeling along.

Christopher Guest has himself a little cottage industry going with these mock-u-mentarys. Spinal Tap, Waiting For Guffman and his latest, Best In Show, are all funny movies. None are as good as the first one, though. Not only was Spinal Tap funny, because of the improv and the great actors, (Billy Crystal as a mime Perfect!) but it was brilliant. Best In Show is really funny, but it is never brilliant. In Spinal Tap, amps go up to 11, which is the best example of irony ever captured by the medium of film. In Best In Show, gay people are funny, middle class people are obsessive and everything is really irreverent. I have no serious complaints about the movie, which managed to keep me and my roommate laughing pretty much the whole way through. This is noteworthy, because up until Best In Show, the only movie we have ever watched and both liked is Bring It On. But I’m not going to be walking around quoting lines form Best In Show for years to come. Like most of us do with Spinal Tap. There is a very fine line between

The other thing that sort of bothers me is that the with-out-a-doubt funniest scene in the movie isn’t in the movie. Deleted scene #5 for those of you with it on DVD. For those of you with a VCR or watching it on cable, I’m sorry, but you will never get to see what the actual greatest scene is. Deleted scenes #5 has nothing to do with dogs and I think that might be why they cut it out. That scene crossed the line from bust a gut funny to inspired comedic brilliance. I think the problem is that so much of Best In Show is improved that about 40% of what the people on the screen are saying is not funny until the other person reacts to it or catches on to the bit. Some of the stuff, like the two Starbucks across the street from each other, is funny, but not “Ha-Ha” funny. The scene where Scott wants to take eight robes for two nights is just kind of dumb. No one is that gay.

What I am going to do, because I am sort of a lazy bastard and I’ve been drinking and this really hot girl is coming over is, to just rate the movie by the performances of the people in it. This is based on how funny they were in the movie. I might cut it short, cause I really am pretty drunk. Here goes: