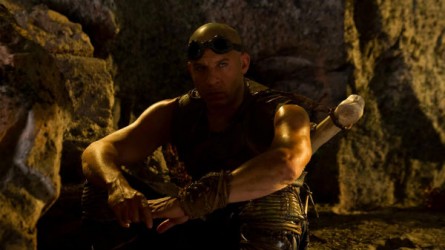 Just forget all that Necro-Monger space opera crap. Here’s Vin Diesel on a death planet with a bone spear, ok?

119 Minutes, R for harems and torso-cleaving

Fair Value Rating of Riddick: $4.50. An excellent setup is undone by a third act that runs out of steam.  Still, it’s a fair movie to rent, and a better sequel to Pitch Black than The Chronicles of Riddick.

Entire Story in one Sentence: Space Robinson Bro-soe (Vin Diesel) hails a few interplanetary taxis  full of bounty hunters in order to leave his vacation on the Death Planet.

Homo-Eroticism:  The one female character (Katee Sackoff) establishes herself as a lesbian pretty early on, in order to fit into the high-testosterone environment.  But the film is so focused on moving from ambush A to ambush B that it doesn’t give any moments of camaraderie or bonding to truly enable a homo-erotic climate.

Hi. We’ll be your assorted mercenaries for the day. We will begin dying every five minutes shortly. Would you like salt for your popcorn?

How Bad is it Really? I was enjoying the first hour of the film, but it runs flat after introducing all of the pieces. Riddick is comparable to watching a football game that starts with a star player making great plays in the first quarter, followed by the team catching up and playing terrifically in the second quarter, only to have the last half of the game become an extremely boring game of slow drives back and forth across the middle of the field. If they had just stuck to making the first act the entire film, with Vin Diesel playing castaway on a planet composed entirely of predatory life forms, that would have been a worthwhile watch. If there had been a greater variety of beasties, that could have livened things. If there had been one or two more mercenary companies…but no, Riddick stops trying after it’s emptied out the toy chest.

If showing the monster of the movie can be likened to the money shot, this film blows it’s wad way too early. Part of what made the earlier Pitch Black work was the deadly trail and error learning curve involved in finding out what the alien beasts could and could not do. In Riddick, the pot sticker monsters (they look like moldy pot stickers with legs, fangs, and a stinger tail attached) are pretty firmly set up before the first space ship has even landed.

Also, a part of the quality of Pitch Black laid in having an ensemble cast that was well established with a diverse range of motives and agendas. In Riddick, the majority of the mercenaries look like sundry lesser WWE wrestlers, and there are only two agendas: catch Riddick (for the mercs) and elude the mercenaries (Riddick). It’s pretty obvious which mercenaries are going to stay loyal, and which ones are going to try to kill others off so as to get a bigger share of Riddick’s bounty.

Best One Liner: “When I get loose from these chains, he’s going to die in the first 10 seconds.”

Novelty Death: Here is where the movie fails. While there impalings and disembowelments and decapitations, none of them really have the elements of comedy or uniqueness which are crucial for a good novelty death. The one death that tries to be a novelty death (where Riddick fulfills his aforementioned prophecy) tries way too hard.

Crowning Moment of Awesome: The movie begins with one of the rarest things in movies, a sensible villain. Riddick has been sent to a distant deathworld, to be betrayed by his bodyguards. After Riddick summarily dispatches his would-be assassins, the scar-faced commander, rather than chasing Riddick, just uses his plasma cannon to blast the entire cliff plateau until the whole formation, Riddick and all, tumbles into the ravine below.

Stupid Political Content: Admirably lacking, except for some Millius-lite monologuing about how civilization makes you weak.

To escape Tatooine, I mean, er…Furia, you must win this pod race, young Riddick…

What was Learned: Never get into a fight with a character who has read more of the script than you have. Riddick’s omniscience crosses the line from ‘super-wily badass’ into ‘I’ve read the entire script’, and the film suffers for that. If we had more moments where Riddick was surprised, or actually had to improvise, our anti-hero would have been a more relatable character.

Also, Riddick’s greatest weapon is not his speed, nor his stealth, but his ability to socially destabilize a fragile order. The best parts of the film came from how Riddick plays head games with the bounty hunters, playing them against each other. If the script was more intelligent about setting up Riddick’s turn as a prisoner in chains, there could have been more suspense. Riddick is a film that starts with a sound theory of a plot, but which then fails to properly execute on any of the good concepts that are initially established.