The thing about the dismal tide is that despite any number of warning shots, clarion calls, and initial shocks, its clarity is only apparent in retrospect, as if we have to experience a bit of immersion before we can truly summon the power of resistance. Problem is, because it involves reassessment rather than real-time investment, any push-back is often too late; more futility than fair fight. The same sense of missed opportunities runs through any current consideration of Philip Kaufmans Invasion of the Body Snatchers, a film so brimming with cautionary content that it threatens to overrun the screen with grim foreboding. Though well-received during its initial run (Pauline Kael all but declared it a modern masterpiece), its hard to find any praise beyond its status as pulse-pounding thriller, or superb remake. Had anyone bothered to look deeper, much as we now look to the original as an indictment of McCarthyisms excesses, we might have had the necessary weaponry to stop the advance of the eras most insidious new development. I speak, of course, of the rise of Ronald Reagan.

It is, after all, no accident that Kaufman set his update in the ultimate symbol of late 70s liberalism: San Francisco. Only the campus of UC-Berkeley would have been more obvious, though by then it may have retreated a bit from its flower power apex. The diaphanous gelatinous spores (thanks, Ms. Kael) that pepper the city at the movies outset are more than galactic salvos of eventual domination, they are the subtle sounds of creeping conservatism. Not yet ready for full revelation, but merely preparatory in nature, much like the post-gubernatorial Gippers radio broadcasts that set the stage for the transformation to come. They fall, gentle like rain, infecting not with the rush of conversion, but an almost delicate imperceptibility, as if the afflicted had invited the intrusion. The genius of body snatching, then, much like Reagans brand of political fervor, is to so strip it of complexity and outward fuss that it can be eased into like a warm blanket in winter. Its no accident that dehumanization follows a good nights sleep. In each case, the victim, as such, can reasonably conclude that, in a phrase that defines smooth surrender, its for the best.

One by one, as an evening of horrors is reclassified as a citys new dawn, the resulting humanoids, now so numerous it becomes impossible to truly assess their ubiquity, continue on much as they would had the spores never fallen to begin with. Buses are ridden, streets are teeming with commuters, and the essential jobs get done, all without the anarchic madness one might expect after an alien invasion. They shower, get dressed, and get on with life, only without any of the emotional core (soul, if you must) that makes a man or a woman a true human being. It seems an odd way to take over a planet  substitute, but otherwise leave things alone  but thats exactly the recipe followed by our earthbound interloper. Reagans ultimate message, in the end, wasnt revolution, but return; stripping away the shading, nuance, and upheaval of a tumultuous half-century by giving us our lives back. Such lives, then, are of a devious simplicity, a golden age before the bureaucrats and do-gooders added unnecessary complication. Its a fantasy, of course, but it taps into the essence of the American experience: chronic dissatisfaction with the present will always present the powerful with an opportunity to confuse and distort the past.

If we wanted the riots, racial strife, and economic insecurity of an age to disappear, we only really wanted them cast out of mind. Eliminating them altogether (or at least trying to) would have required a level of social engineering out of step with the Reaganesque vision of less being more, and this new day wasnt about taking on new projects. We just wouldnt care anymore, and our gaze would be fixed not on what ailed us, but what made us feel better about the whole damn enterprise. Distraction was the name of the game, and how better to achieve this state than by granting us the permission to be detached? Thats what Kaufmans walking dead are, in fact; fully functioning workers, doers, and strivers, only without the capacity to feel guilt or empathy. Its all about me, but me couldnt be any less relevant. The replacements would still have an underclass, only these folks would stay good and quiet and mill about without the loose talk that makes the upper echelon unsettled and nervous. Blacks are still integrated and among us, only youre not likely to hear about their lack of access to the rooms that really matter. They come and go, glance and nod, and retreat once again to a place of serenity and quietude. If they dont rise, its because they lack the will. More than that, they simply dont see the need. 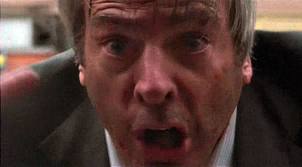 Ultimately, it makes sense that the few remaining pockets of resistance exist on the side of government largess, in this case the Department of Health. Both Elizabeth (Brooke Adams) and Matthew (Donald Sutherland) are the antithesis of Reaganism, all buttoned-up regulation and humorless insistence on fair play in the face of shuttered business and frustrated capital. Theyll be lobotomized last, of course, because for them, they have the most to lose. As the city they love inches ever closer to mindless absorption, their fears  and ultimate defeat  will feed a beast best sated by only the worthiest of adversaries. Its much how one imagines it for Stalin  sure, killing millions of peasants accomplished a goal, perhaps eliciting a slight grin, but only when the blade dispatched a gaggle of generals could he feel truly fulfilled. So as the film closes with Matthews shriek of conformity, pointing out the last remaining holdout (Elizabeth, or us?), we know victory is at last at hand. The final guardian of the peoples interests has been co-opted and transformed, much as the other public servants, from police to transportation, have been silenced by privatization along the way.

Amidst the slow burn of encroaching evil, Kaufman was cheeky enough to add an overt warning disguised as a nod to the past. Kevin McCarthy, one of the few links to the 1956 original, seems to be the only man alive on this day to care about whats being lost, and his hair-raising panic is a refreshing contrast to the self-satisfaction of the Reagan faithful. He tells us they are coming, but more than that, theyre already here, and predictably, hes soon finished off by a gang of the snatched that trail him like a lynch mob. Its a perfect summation of whats to come: no dissent save the attacks that serve the interests of the powerful. Pointing out disparities in wealth and income will be class warfare, the naked bias of the justice system an example of playing the race card, and doubting the manipulative nature of patriotic pageantry will remain a sign of your disloyalty. But the messenger, that guy with the hounds at his tail, hes the problem to be fixed. And its a safe bet these new and improved members of the human race will do all the dirty work themselves. The ultimate efficiency of evil is to convince the other guy that hes doing what he wants, not what hes being told to do. 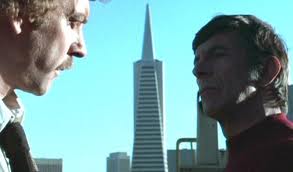 All that aside, Reagans rise would not be complete without Reagan himself, and there he is, brought to us in the shell of Mr. Spock. Leonard Nimoys Dr. Kibner, a New Age guru/author whose very existence appears to indict an entire generation of touchy-feely insanity, is actually the ultimate salesman for the decade to follow. Whether calling for a return to family (people, especially women, tend to mind their manners with children to feed), or bemoaning the loss of values, Kibner is a con artist so entrenched that he actually believes his own bullshit. As Reagan lacked the guile to peddle a conscious lie, our Kibner remains similarly oblivious to his own fantasy. Yes, hes a leader of sorts regarding the roundup of stray sheep, but when he berates Matthew, Elizabeth, and Jack (Jeff Goldblum, born to play a self-righteous poet) one evening after a book signing, its to insist that weve retreated from true feeling. At that, the trap is sprung. With feeling comes commitment, and with that, responsibility, and Kibner knows full well that its not what were after. Once the pain of risk is realized, were more receptive to his true message of retreat. Its the brilliance of Reagan individualism that at bottom, it first required the surrender of self. At the heart of this anti-Communist was the plea of the collective. Authoritarianism reborn as freedom. Where morning in America is an expressionless face that refuses to betray the rot within.

Sure, Reaganism seemingly prized the renegade entrepreneur, which for so many is the expression of individual freedom, but it all remained frozen at lip service. The movement, like all movements, celebrated power, wealth, special interest, and control. But first it had to quiet the masses by making them think the others were keeping them from sharing the treasure. Still, Invasion of the Body Snatchers was not so naïve as to believe another term of Carter was the secret to glory. Theres a fatalism to the film that doesnt offer any one solution to the coming crisis, for were likely beyond salvation. Instead, Kaufmans warning is that an apparent answer is in the offing, and its better to face our collective demise with clear minds than old illusions. But he knows where were going. Weve telegraphed our decision well before 1978. Its too late, but at least he wants to go out with a clean conscience.