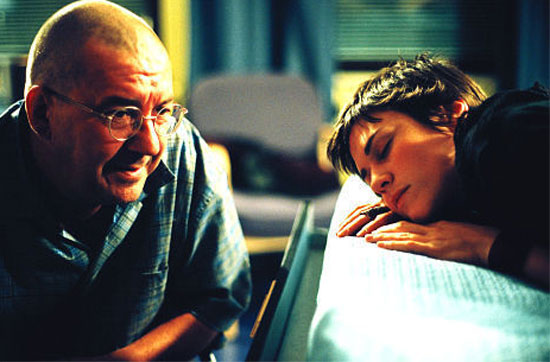 The biggest treat at the festival, largely because it takes a clichéd premise — dying man faces his own mortality — and manages to say something fresh and original. More than that, the people we meet are intelligent, sophisticated, witty, and not once give in to sticky sentimentality. This is not some cloying Oprah bullshit, but rather a celebration of a life lived with dignity and without apology. The man in question cheated on spouses, flirted with everything that moved, and cursed his own son for being a capitalist stooge (it was amazing to find a rock-solid socialist as a lead character), and is never portrayed as a sweet old lug with a heart of gold. There is fire and selfishness to this man, as well as a fierce intellect that never lets go. There are the expected shots at America (this is a French-Canadian production, after all), which was just fine with me, although the director attacks Canadian health care as well. At bottom, these are people I want to spend time with, as well as engage in unlimited conversation. The dialogue sweeps along with charm and delight, and when it was over I felt as if I had watched a complete life meet its unfortunate end, rather than a dull existence come to its merciful termination.

Everything Matt wrote is absolutely true. I just want to examine The Barbarian Invasions in more detail.

Let’s start with Rémy’s (Rémy Girard) fire and lack of apology for how he has lived his life. Rémy is of course the dying patriarch and the main (but by no means only) focus of the film. His wildly wealthy son Sébastien has just returned from London at the news of his father’s deteriorating condition (cancer, I think, though it is unimportant). Several of Rémy’s, well lets just call them friends and colleagues, along with his estranged wife, are also bedside. After taking stock of the situation, Rémy comments, “I have my friends, my son, my wife and my two favorite mistresses with me. Now I can die happy.” I know it is a cultural difference between Quebec and the states, but you just know that if this had been an American film, the bad blood between the mistresses (both of whom appear to be academic colleagues of Rémy) and the wife would garner the most attention in that scene. Not here. Rémy’s friends, family and former flings surround the man in his dying days because they love him. They love him for who he is, flaws, failings and all. And this simple yet crucial fact rings truer here in The Barbarian Invasions then I have ever heard it ring in any other film. I suppose when you do not aim a film at 18-27 year-old males or bored American housewives, the results obtained can be pretty startling; pretty shocking even in their presentation of “the Truth.” While an American audience would demand that Rémy’s sins nail the man to a cross, the people in his life love him in an honest, open and intelligent way. Sure, he is not perfect, and no one is.

I also LOVE how Rémy dies an unrepentant atheist. Not so much because he is an atheist, but because Rémy is allowed to be an atheist. I can’t even think of an unredeemed or unsaved atheist in an American film. In another fantastic scene (of many) Rémy is screaming at his Roman Catholic nurse, “Pope Pius XXII sat on his fat ass while Primo Levy rotted away in a concentration camp!” The nurse, obviously aware of her intellectual inferiority and lack of any sort of knowledge concerning the subject falls back on George “Jesus Christ is my favorite political philosopher” Bush type of rhetoric by saying, “If history is just a string of abominations like you say, I believe that there must be a person who can forgive us all our sins.” To which Rémy smartly answers, “I envy you.” And what he means by that, specifically, is that it would be nice to have such an uncomplicated, simple view of reality. How easy that would be. But there is no way, even in his most dire hour, that he can let his intellect go lax, his use of logic and reason fade and most importantly he cannot let his beliefs, what he holds true and dear, be countermanded by popular sentiment and superstition, no matter how bad it hurts, no matter how scared he is. Talk about Ruthless, Rémy is it. Also, of course, there is no hatred between Rémy and his nurse. Quite the opposite. Here are two people who respect each other’s beliefs, or rather they respect each other’s right to hold those beliefs. And of course, at the end of the film when the nurse shows up (illegally, and out of her feelings for the dying man) Rémy tells her, “You know, there was a time not long ago where I would have jumped your bones already.” To which the nurse answers, “And I might have let you.” It is one of the most tender moments in The Barbarian Invasions.

No proper review of this film can fail to include mention of Nathalie, portrayed excellently by the stunningly beautiful Marie-Josée Croze. I need to back up a little; Sébastien, Rémy’s “capitalist stooge” son is wracked with guilt at how much his father is suffering and also tortured by his inability to help in any real way. He is not used to being so helpless (emasculated). So he does what I would probably do in that situation if I were a multimillionaire; he begins throwing his money around to try and ensure his father’s comfort/atone for his shortcomings as a son. Matt Cale above mentioned the film’s indictment of the Canadian health care system. Indeed. Rémy is kept in an undignified room with several other men and surrounded by doctors who don’t know his name, let alone his chart. Sébastien bribes the sorely bureaucratic hospital administrator to essentially give his father an entire unused wing of the hospital. He then bribes the head of the Union to paint and fix up the room so that his father may, well, die comfortably. Sébastien also contacts what he believes to be superior American doctors and even takes his father into New York State (it might have been Vermont or New Hampshire–the U.S. at any rate) for treatment. Sébastien’s ultimate act of self-delusion comes when he pays Rémy’s former students cash for them to visit the hospital and pretend they miss the old man. Finally, one of his doctor friends tells Sébastien that there is no hope for Rémy. The best that the son can do now is to make sure he’s comfortable. This doctor friend also tells Sébastien that heroin is 800 times more powerful than morphine.

Enter Nathalie. One of Rémy’s former mistresses suggests that perhaps her daughter Nathalie could help procure some smack for the dying man. Just before her suggestion, Sébastien, naively but earnestly consults with some Montreal detectives about how to best procure heroin for his terminal father. Nathalie is a junkie and Sébastien enlists her help by not only paying for Rémy’s dope, but for her dope and her time as well. My best friend who I watched The Barbarian Invasions with commented on how a movie like this could never be made in today’s Hollywood; There is no action, there is no sex, intelligent dialogue rules the screen and heroin is presented as medically beneficial. I must point out that while he is almost totally right, there is a love story. Nathalie and Rémy do fall in love, though it is of the non-physical type. Their scenes together are among the best in a film littered with magnificent scenes. At one point Rémy confesses to her that he is a total failure, having achieved nothing; he has no legacy. She tells him that at least he, unlike the great majority of people, realizes that. Their time together is so soft and intimate that above all else, you want Rémy to recover for the sake of Nathalie. She even tries to clean up by going on methadone, for him; not for herself and most certainly not for her mother, but for Rémy and Rémy alone. In the end, she provides the film’s most heart wrenching moment but beautiful moment when she instructs Sébastien that all the son really needs to do–rather than throw his money around–is to touch his father and tell Rémy that he loves him. Simply a devastating observation that is unparalleled in its humanity, honesty, intelligence and accuracy. And after Rémy has left this world, Nathalie, I believe, only kisses Sébastien in the hopes that perhaps some bit of the father is present in the son. When she realizes that Rémy is truly gone, the kiss is over.

I could pile my own silly accolades upon The Barbarian Invasions until the cows come home. Director Denys Arcand gives us scene after wonderful scene to reflect upon after the film itself is over. All the praise that I can give, as well as that from other critics, is completely warranted. Yes, this movie won an Oscar for Best Foreign Language Film, but it really deserved Best Picture, being several hundred times better than last years winner, The Return of the King. What I will do right now is to tell you about the DVD, which contains a very good featurette called, Inside the Barbarian Invasions. The cast members as well as the Director and Producer sit down for dinner and talk about the film, sure, but more importantly the lessons of the film and how they apply and relate to life. Honestly, in my life I have rarely heard such a group of intelligent people sitting at one table. And of course, I have never heard any of our actors utter anything resembling intelligent, slogan-free discourse. There was none of the usual Hollywood ass-kissing; no “He was great!” “She was great!” bullshit was present. Just frank, open, honest adult talk about life. To give you an idea, one woman comments that when she gave birth to her son, she also realized that she had given him death as well, for life is inseparable from death. When oh when are we ever presented with such philosophical musings from our celebrities? Of course the answer is never. I mean, that very topic is the theme of one of my very most favorite songs, NoMeansoNo’s (a Canadian band, I should point out) epic, The River. Remember that NoMeansNo is a band that routinely quotes and reflects upon Heidegger, Gogol, Joyce and Nietzsche, just to name a few. Here, so you can see the similarities between the two works:

“Mother’s tell your children the truth
Don’t hide the fate that’s waiting
When you’re born you start to drown
There is no hope, no saving
First the gift of love is given
Then the winds rise, the sails are riven!”

So, in summary, I just need to point out how much ass Canada kicks. Move this movie up on your NetFlix queue, steal it out of somebody’s hand in the video store or better yet, buy The Barbarian Invasions. For it is a film you will want to watch often, as I plan on doing, because the movie is simply a masterpiece.