Home / Features / Memories of a Reagan Boyhood, Part I

Memories of a Reagan Boyhood, Part I 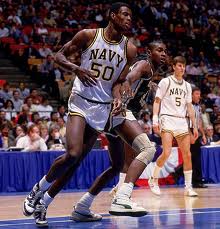 Its March Madness, circa 1986. While I was suffering through my maiden voyage of junior high school, a journey that would witness more gaffes and nerdy near-misses than any similar boyhood in recent times, Duke and Louisville were making their respective ways to a less than memorable finale. Before that big game  I was a Duke fan, so of course theyd lose  there was Navy. The Midshipmen. With David Robinson at the helm. Somehow, almost singlehandedly, the Admiral had willed his team to the Elite 8, which seems even more unbelievable in retrospect, as service academies werent supposed to compete at any level. Sure, Armys football team occasionally made the Cherry Bowl or some such forgettable nonsense, but this was the big time. A step away from the illustrious Final Four. Only they didnt make it. Bounced by Duke, 71-50, Navys day in the sun ended with the expected pain. So what of it, you might ask? Just setting the stage, my friend, for one of the most outrageous cons in American history. Needless to say, I was on the receiving end of the injustice.

While just about every friend I had in sixth grade left me for greener pastures in the seventh, one key link remained. Reggie, well call him, because he was the only black kid in the state of Colorado at the time, and his father was head basketball coach at the Air Force Academy. We were the best of pals in elementary school, but once popularity and image came to call, my bowl-cut sorry ass didnt stand a chance. But he humored me much of the year, and as he was going to the Final Four with his father, I meekly asked him to secure me a trinket or two. Hell, why not an autograph? And if you happened to run into David Robinson because of your esteemed father, even better! So thats where we left it. Once he got back into town and returned to school, Id receive my prize. What a guy! What a friend! He was thinking about me the whole time. Maybe I could salvage this rotten fucking year, after all.

Later in the week, Louisvilles victory at last secured, Reggie once again appeared on the school bus. Only instead of running up to me with autographs, hats, and pennants, he studiously avoided my gaze. The shoulder was more than cold, it all but hammered me back into my seat with thunderous disgust. Had he forgotten? It wouldnt have been entirely unexpected, but what 13-year-old doesnt keep his word? But I had jumped the gun. As we exited the bus and made our way to Dantes third circle, Reggie approached me, gifts in hand. Fine, one was a plastic commemorative cup he could have picked up off the ground as he exited the arena, but the other, was it, could it be.an autograph? It was! So why was it on a 2×4 inch neatly cut piece of yellow lined paper? Was his father preparing a legal brief at the game and had nothing else to hand his boy? I carefully pinned the scrap between my thumb and forefinger and looked more closely at the scrawl. DAVID ROBINSON! My heart soared, albeit briefly. 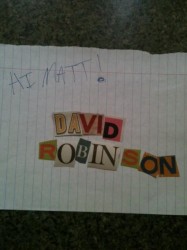 I thanked Reggie for the items, but it took me all of three seconds to shrink deeper into my ever-blackening soul. If, in fact, this was David Robinsons John Henry, its likely he was a little retarded. Educated at a prestigious institution and full of dignity and high character, was it possible that Mr. Robinson signed autographs with his feet? Now, Im no handwriting expert, but I know the difference between an adult signature and a childs approximation of same. At best, it was a trace job, at worst, a complete forgery. I lacked an internet to check said chicken scratch against the real McCoy, but the D had appeared to have been a second or third effort, and yes, this was not an erasable pen. I was embarrassed. Appalled. Sad beyond measure. Not only had Reggie not secured the big guys autograph, he felt it was entirely appropriate to pass off the worst facsimile in the history of planet earth as exactly that. No need for further inspection, I threw the damn thing away. But I kept the cup. Im no dummy, I said to myself, not for the last time.

Postscript: David Robinson was selected #1 overall by the San Antonio Spurs in the 1987 NBA Draft. Despite losing two years of playing time due to his service commitment, Robinson became one of the games great players, leading the Spurs to two NBA titles, earning an MVP award, and making the All-Star game ten times. He also scored over 20,000 points and was elected to the Basketball Hall of Fame. Hes currently retired, handsome, and respected by all.

Reggie eventually entered the Air Force Academy, started at guard for a season on his fathers team, and, last I heard, was flying jets, earning good money, and making every last man, woman, and child proud. He owns his home outright, has a leggy model on his arm, and travels the globe as an ambassador of the American Way.

Matt, however, never recovered. His lost his faith in man, fell even deeper into isolation during eighth grade, and never again had a black friend. Hes also writing about the event twenty-seven years later, while both Reggie and Mr. Robinson moved the fuck on. He maintains his belief that Reggie forged that goddamn signature on the goddamn bus ride that morning.