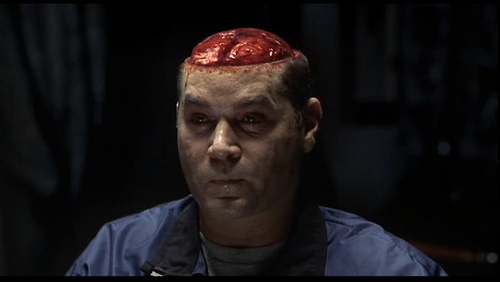 What makes this series so cool is that it depicts a mundane hero faced with super-villains. Agent Starling is equivalent to Peter Parker while Hannibal is like Magneto or someone. Am I mixing up comic worlds? I don’t read fucking comic books because I’m practically literate, but you get the idea. Hannibal is almost supernatural and by all logic should be able to defeat Starling rather easily, and in fact does so more often than not. In this film, a second villain, Mason Verger, also takes on fantastic powers due to his wealth. Then there’s Starling, who’s got acumen, intelligence and a pistol. True, she’s in the FBI, but the rest of the FBI is mildly hostile towards her, which limits the advantages of membership. It ain’t a fair fight.

All of this makes Starling an appropriate, contemporary hero. There’s a reason most of the winners of the Nobel Peace Prize are people we’ve never heard of: they lack power and influence. Their adversaries, like Clinton, Shell Oil and Saddam, are well known to us because they wield fantastic power and influence. Nonetheless, with enough tenacity, some ordinary people are able to chisel out small victories against vastly more powerful adversaries. This is what Starling does and why she is admirable.

The name of the movie is, of course, Hannibal, and there is no doubt that the villain is the star. Hannibal is evil, if anybody is, but he is also likable because he has charisma, good taste and when he harms people, they are usually getting their just desserts (and so is he! yuk, yuk). More than anything, Hannibal is likable (as a character in a film, which, based on some other reviews I’ve read, must be pointed out as being a different thing than being a person in real life) because he acts from controlled desire rather than weakness or compulsion. He is strong.

Yeah, yeah, yeah, but is it a good movie? Unquestionably. Ridley Scott and his writers do a wonderful job of bringing all of the threads of the story together and making each one interesting and entertaining in its own right. The new characters and locations add a lot, so their effect is not to dilute the Hannibal/Starling story, but to enhance it. The acting is top notch, as you would expect with such a cast. The underused Ray Liotta, in particular, is able to hold his own with the fantastically talented stars.

My one major complaint, which is a spoiler–I don’t think Hannibal would ever chop off his own hand rather than someone else’s.  Even with a lighter film, that note was just too false.  I wonder if this action was inspired by Titus, which looks to have taken inspiration from Silence of the Lambs.