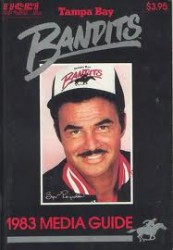 Spring, 1984. Morning in America. Jobs for all, uncertainty vanquished, world peace finally at hand. Even the homeless had a little extra bounce in their step. And down around Tampa way, Burt Reynolds owned a football team. The Bandits, as if the world could allow for another possibility. So while the snotty, ossified old school catered to oil men, family dynasties, and establishment wealth, the younger, faster upstart made a seat at the table for Americas greatest mustache. Sure, iconic bastards like Donald Trump were still sniffing around the new associations hindquarters (New Jerseys Generals), but here, while the more historic league rested until autumn, a mere actor put up his snakeskin boots, flashed a generous tuft of chest hair, and got down to business.

There would be no jackets and ties at these meetings, of course, and if anything, the players themselves might take the field shirtless. It was that kind of atmosphere. And while the NFL creaked and groaned in the wake of strikes, complacency, and fading empires, the United States Football League shot to the forefront of the nations attention with up tempo play, dynamic new stars, and an unpredictable attitude that left the future bright, if not entirely certain. They even had a two-point conversion! Sure, the whole damn thing might fold tomorrow, but it could just as easily conquer the kingdom. After all, werent all the college stars turning up their noses at the NFL to play here? Herschel Walker, Steve Young, Mike Rozier, Jim Kelly, Reggie White.There was credibility and gravitas to burn, and for a young sports nut, there was no turning back. 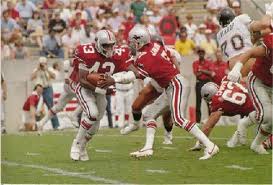 The inaugural 1983 season caught my eye, sure, but it wasnt until the USFLs second year that, like a crippled nun before the curative powers of Lourdes, I surrendered my very life to the cause. Maybe it was that one night, league magazine in hand, when my friend and I spent hours in tears as we recounted again and again the Reynolds tale of a lifetime dream now fulfilled. The man who shagged Sally Field and Dinah Shore had been an empty shell until this day, the very one where his trademark cackle could now fill the same stadium that hosted the lowly Buccaneers? The iconic stand-in for a generations masculinity was, at long last, made whole? What NFL suit had ever displayed so boyish a grin? So puckish a desire? Sure, that other group had The Catch, Joe Cool, and a mountain of media might, but the guy who made Cannonball Run was on our side.

Still, while Id like to think I became a Tampa Bay Bandits fan solely because of Burts magnetism and unbridled power over life and death, its far more likely that I fell in love with the teams logo. Locally, there was the Denver Gold (with old Broncos legend Red Miller at the helm), but who cared about a team with some silly yellow splotch on the helmet? In fact, the Gold might have been the lone exception to the rule that, above all, the USFL had unparalleled eye candy and knew how to use it. The NFL played it conservative and traditional, from the Browns to the Packers, while the USFL had masked gunmen, muscular fists with lightning, and rip-snorting bulls. Even the team names upheld the radical image  Maulers, Invaders, Gamblers, Outlaws, and Breakers. And while a standard city or two made the cut, we took our road show to bizarre locales and hideaways alike, from Portland to Memphis, Tulsa to Birmingham. It was a peoples league, a game for those who wanted pigskin magic along with the crack of summer baseball. 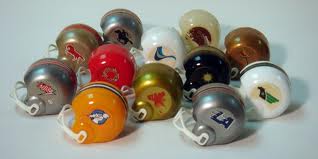 And in case the USFL seemed too new or unfamiliar, it also populated its squads with the tried and true, from ex-Brown Brian Sipe to Steeler stalwart Cliff Stoudt. But it was the new blood that made the sale, even if the contracts being offered seemed akin to shady land deals that screwed Native Americans out of their birthright. I failed to understand it all at the time, but guaranteed money was, from a legal standpoint, slightly important to a players overall security, and no USFL contract seemed to offer such a thing. There were tales of bounced checks, tire-screeching bank runs, and any number of financial shenanigans, but all the woe seemed to fade whenever the topic switched over to Steve Young. Hadnt he signed a $40 million deal that stretched out beyond the grave? It might have been the one and only player-friendly deal in the league, and rumor has it Young continues to receive checks from some mysterious trust fund to this day. Leave it to a Mormon to negotiate an agreement that reaps rewards three decades after the business itself dissolved into bankruptcy.

Despite Bostons move to New Orleans, Arizona and Chicagos bizarre roster swap, and the penniless reality for half the leagues moribund franchises, attendance remained high throughout the spring and summer of 1984, largely due to the leagues generous expansion. The future appeared bright and limitless, as both ABC and ESPN expressed full dedication to promotion and ultimate success. Sure, the loose talk of a move to the fall scared the shit out of all of us, but for me, such reckless abandon seemed utterly impossible. We had a good thing going, and to this day, Ive never been as similarly devoted to a sport. The 86 Mets were, ultimately, the peak of fandom, and the only fan-related championship Ive ever enjoyed, but 1984s USFL season was the one true obsession. From morning to night, February through July, I thought of little else. My Bandits cap became a bent, tattered, sweaty mess, my fingernails bloody stumps, and on more than one occasion, I flirted with suicide in the face of a loss. I cried and cursed, jumped and roared, and never gave up hope. It was, perhaps, the last hurrah for a childhood on the brink.

And while subsequent years featured a love for, and devotion to, the world of sport, nothing would ever match that Olympic summer. And after other attempted immersions, baseball card collecting, and stress-filled afternoons, it all stopped, like a ticking clock suddenly smashed into an irretrievable state. I still watched, of course, and even cared about an outcome or two, but the blood that now coursed through my veins lacked that essential ingredient so crucial to ultimate passion. So while I get living and dying by every pass, pitch, and free throw, for me, it remains the province of youth. Not that it must, or that carrying it beyond those carefree days smacks of silliness, but once lost, the totality of devotion remains forever elusive. It can come back in fits and starts, mere pieces of the past, but its never really the same. Nostalgia remains our last, best hope of recapture, but we all know its just the dust of our dreams getting in the way.