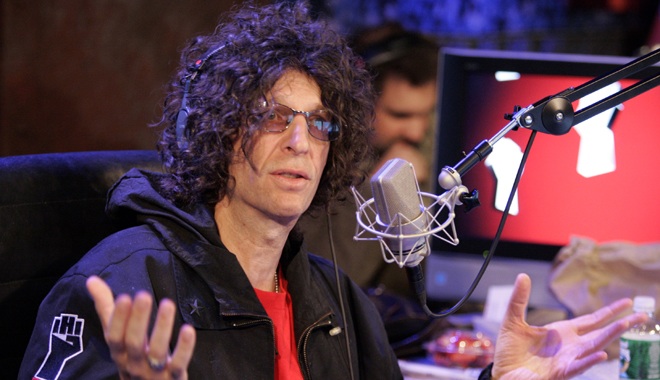 Howard Stern has long been one of the funniest people on the radio, and now the world has finally gone so mad that he is also the best political commentator on either radio or television. The fact of the matter is that Stern, as he will admit, is a much, much better comedian than he is a political commentator. It just happens that our political discourse has degenerated to the point where there is now only one person with any combination of intelligence, brains, balls and honesty talking about politics in the mainstream media and he happens to be a huge fan of lesbians.

Let’s begin with the pure comedic genius of Stern . There are more talented comedians. For a brilliant, off the cuff remark, Phil Hendrie is better than Stern almost every time. That isn’t to say that Stern isn’t good at comic riffing. His imitation of George Takei calling Stern Producer, Gary Dell’Abate a “Huuuman Mooonkey,” had me laughing out loud for a good thirty seconds the other day. And no one talks to women better; “Would you do anal if it was in the script and it was a really good script?” Stern’s real strength, however, is a brand of “reality” comedy that he more or less invented. He scours the country for boobs, oddballs and freaks, puts them into a situation with great comedic potential and simply allows them work their magic. The best recent example: Stern somehow convinced the good people of the Westboro Babtist Church, famous for their website, God Hates Fags, to play a round of “Family Feud” with people from a gay personals site.

Once Stern’s collection of living jokes are going full speed, he and his crew maximize the comedy with deft intervention. Sometimes, they just keep a hilarious running commentary, as with the tapes of George Takei. Other times, Stern nudges his subjects into further absurdity with the perfect question or instruction, as when he asked a Klansman, “Marry, Fuck, Kill: a Jew, a Mexican and a Black?” Occasionally, Stern will pull a prank on his hapless guests. The most memorable example was when Stern had Richard Simmons on his old TV show. Simmons trotted out a sack of lard who had reduced her weight by half, but still looked like a giant potato. As she discussed her struggle, a Twinkie on sting lowered from the studio ceiling and danced tantalizingly before her face. Next came a whole chicken. This sent the woman into hysterics and Simmons into a rage. Cruel? Yes. But one of the funniest things I’ve ever seen. Richard Simmons in a rage.

So how did a brilliant, lowbrow entertainer become America’s voice of reason? Stern himself hasn’t changed much. In fact he is not particularly well informed on political matters, and his political thinking is not subtle or sophisticated. Stern was provoked by the loudly Republican and largely bipartisan effort to cleanse America’s airwaves of everything not fit for a kindergarten classroom. Naturally, that includes Stern himself. Legislation has already been passed (written by Sam Brownback) that, once signed, will effectively ban Stern and his ilk (but mostly Stern) by setting fines for indecency at about $500,000 per incident, without defining what counts as indecency. Under Bush appointee, Michael Powell, the FCC has begun arbitrarily combing the broadcasts of Stern and others (but mostly Stern), often going years back into the archives and picking out seemingly random content as offensive. Since there is no set criteria for indecency, and since the FCC enforces the laws capriciously (and unconstitutionally), the message is sent. “We can shut nearly anyone down, for nearly any reason, so don’t piss us off.”

This scenario has elevated Stern’s interest in politics, although it’s always been a regular subject on the show. Now, Bush’s Jesus-fanaticism, incompetence and hypocrisy are Stern’s favorite topics. Because Stern is not affiliated with either party or their bullshit agendas and talking points, he can address Bush’s shortcomings with a bluntness and honesty that cannot be found elsewhere. This makes the Stern show an oasis. For years, I’ve been pulling my hair out. Why doesn’t somebody point out that Bush not only used coke until he was 28, but thinks that poor people who use coke belong in prison. He even signed legislation as governor extending prison sentences for possession of small mounts of coke! Why the fuck isn’t anyone on radio or TV pointing out that this piece of shit used his family influence to skip ahead of others for a spot in the National Guard during Vietnam, and believes that the war was justified, meaning it was OK for poor people to die in it, just not him. Does anybody give a shit that the President of our country believes that most of our citizens deserve to burn in hell?

There are dozens of such points, all neglected. We see some of these facts presented in the “liberal” media, but rarely, if ever, see them put together into the picture that shows what kind of a man Bush really is. Part of the reason is that Democrats are just as hypocritical and wrong about Iraq, drugs, the FCC and other such issues as the Republicans, so neither they, nor their agents in the media want to see any honest scrutiny on those topics. Stern has no such agenda, so when he turns his attention to these subjects he can approach them honestly. Listening to him talk about these issues is literally refreshing. I feel less drained, weary and cynical hearing just one person on a major radio station talk about reality. As when Larry Flynt was running the country for a few months back during Clinton’s impeachment, it is pretty warped that the man who gave us “Lord of the Anal Rings” is the only place on the radio or the TV that one can turn for honest and sane political commentary. But hey, at least we’ve got someone.