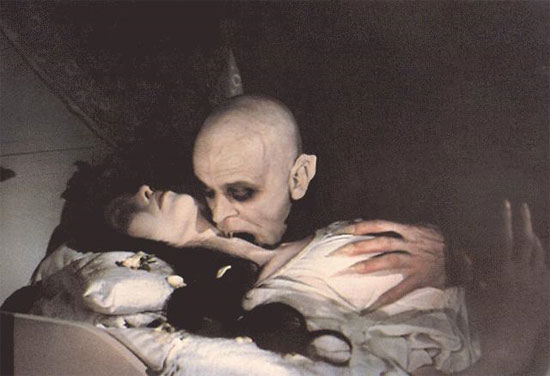 Jonny is also a creature of the night…

Herzog’s 1979 Nosferatu: Phantom der Nacht is a remake of FW Murnau’s classic Nosferatu: Eine Symphonie Des Grauens, itself an interpretation of Bram Stoker’s book, Dracula. More than just a remake though, this film is an homage to, quoting Herzog, “the most important German film of all time.” Included on the DVD found in the Herzog/Kinski box set is an odd yet enlightening making of vignette. From it we learn that Herzog feels his generation (those born at the end of or after WWII) is a “fatherless” one. He sees remaking Nosferatu as an essential link to the golden age of German cinema before film was corrupted by the Nazis (think Riefenstahl). Obviously I’m going to see it differently since I A) had a father B) never had to worry about my cultural heritage being corrupted by the Nazis. Well, maybe not so much B), but you get my drift. Still, for me, Nosferatu is a fascinating retelling of the classic tale of Count Dracula, which is highlighted not so much by Kinkis’s performance as it is my the masterful sets and cinematography. The latter being some of Herzog’s best work and he is widely regarded for inspired camera work. The sets though… where the hell was this filmed? I want to go there–badly–on my next vacation. As if I can afford vacations… Anyhow, the reinterpetation by Herzog was fun to watch and later to pick apart. Like the inefectual and bumbling science-minded Van Hesling, especially in light of the way that character has been portrayed recently. 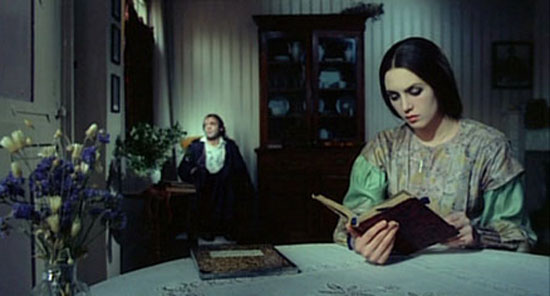 I’m going to go ahead and assume that all of you are familiar with Stoker’s story, so I will skip a plot summary. Herzog tweaked with the details a little, but no matter. What does matter are the sets. Simply breathtaking. As with most Herzog films, my ADD and TV-baby addled mind finds the pacing of this one a bit slow. Herzog is keen to linger on a particular river or swatch of forest for thirty seconds longer (or more) than your typical Hollywood director might. Again, I admit that I find many of his films “plod” for this reason, but perhaps it is the years of MTV that disallow me from being able to digest a five minute shot of the sky. Or perhaps it really is dull. As recounted many times elsewhere, Herzog has a “thing” about nature; he is simultaneously in awe and disgusted by it. Herzog also has a thing about walking. He much prefers it to all other forms of movement and travel (“Tourism is sin, and travel on foot virtue”). When Jonathan (Bruno Ganz) reaches the base of the mountain range upon which Dracula’s castle is perched, everyone in the village refuses to take him there or lend him a fresh horse (there is a particularly fantastic exchange where a coach driver refuses to acknowledge that the road, his carriage or any of his horses even exist). So, Jonathan hoofs it and we follow as he slowly makes his way up the mountain. An image often repeated by Herzog–a man sitting on a rock–is employed as nearly at his destination, Jonathan rests and gazes up at the castle. Having thought about it, I am never sure what Herzog is trying to say–if anything–about men sitting on rocks. Heart of Glass has a nearly identical scene as its opening.

Finally, we meet the Kinksi version of Nosferatu. Wow. In the featurette Kinksi explains that he is able to play Dracula only because Dracula is inside of him. With any other actor I would immediately dismiss this as pretentious posturing. Having watched Kinksi as the legendary vampire, it took me about five-seconds to do so. For such a physical actor it must have been a treat indeed to play Dracula. Pay special attention to what he does with his hands/claws. The nuance of it, the almost over-indulgence and almost over-acting is higly affecting, and well, disturbing. Kinksi makes it work. Seriously creepy, particularly at one point where he is explaining that the servants are unavailable. Watch him uncork and then reseal a water bottle with his palm. It’s almost grotesque; as if his hands have a mind of their own and perhaps motivation. I know that in Murnau’s version, the curse of being a vampire was supposed to be exactly that for Count Orloc (because of copyright issues, Dracula was renamed Orloc in 1922). A hardship. There is nothing romantic about Dracula; he is an overgrown disgusting rat, yet sympathetic in some way. The same is halfway true of Kinski’s portrayal. We do feel for the beast, for he is obviously suffering and quite far removed from humanity. Yet Kinksi brings such a tough muscularity to the creature that we are horrified by him as well. Particularly the scene when he attacks Jonathan at night. First of all it is the complete opposite of any horror film made in the last however many years. Instead of the typical bombast of loud noise and quick, dark cuts plus fifty blood packs, Nosferatu-Kinski just hovers above Jonathan, lurking. For his part Jonathan is terrified. The two lock eyes for the better part of a minute, and the scene is (relatively) brightly lit. Slowly, slowly, slowly Kinski moves in until he just grabs Jonathan’s neck and starts sucking. Pretty fucking cool, and actually very creepy. I also dug the scenes where he was manhandling the coffins filled with dirt. In Stoker’s book he talks about Dracula’s inhuman strength and it was nice for once to see this dramatized not by throwing somebody through a wall but just by very casually lifting something extremely heavy. 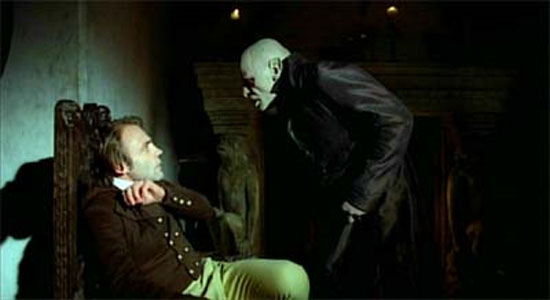 Isabelle Adjani plays Lucy and dude, is she gorgeous. Like, she’d be an eleven on Am I Goth or Not? Just blisteringly hot in a very undead sort of way. And YES, I know she’s alive in the movie; I’m just commenting on her intense raccoon eyes and the fact that her skin is the same color as my bathtub. As the Count said, “what a beautiful throat.” There’s a particular scene for the advanced perverts out there where Adjani is bent down while sprinkling some crushed up communion wafers around Jonathan’s feet and, well, lets just say that she said she will never wear pants because her hips are too big. The end scene where Dracula molests/kills her was quite nice as well. She’s fucking beautiful. Nuff said.

One thing that irked me a little were what can only be called flubs on Herzog’s part. They represent a laziness and/or carelessness on his part that I just can’t accept. Case in point; vampires don’t reflect in mirrors, so the story goes. Acknowledging this, Herzog gives us a scene where a door opens and Dracula’s shadow is seen entering the room via the mirror that Lucy is brushing her hair in. The shadow fills the mirror and Lucy is terrified. When Dracula finally does appear on screen, he is to the side of the mirror but his face is clearly reflected in its corner. Adjani quickly steps in and covers the flub with her head, but like, it was like in that one Itchy and Scratchy episode where the same rib is struck twice in succession yet it produces two distinctly different notes. I really hope someone was fired over that gaff. Another was when Dracula finally meets up with Renfield. For some reason, no one bothered to apply any makeup to Kinski’s neck, so while his head and face are stark white, his neck is nicely flesh colored. Again, not the end of the world, but I expect more of an attention to detail from Herzog. Early on in the film a bike rack is clearly visible. I guess that one could be explained away as a hitching post for midget horses… 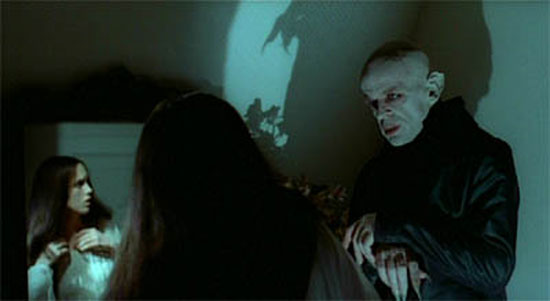 Obviously I’m nitpicking. There was so much to like about Nosferatu that you should view the preceding paragraph as nothing more than curiosities and my way of trying to for once find fault in Herzog’s work. No one hits home runs all the time. But really, ignor me. Especially in light of the rats! My God man, were there a lot of rats in this movie. Renfield mentions that his master is the “Lord of the Rats.” When the boat carrying Dracula’s black coffins reaches the town its only cargo is Black Plague carrying rats. For the remainder of the film, almost every set was just crawling with these gross, gray rats. Especially vile was when the rats were covering the feet of some people as they were having dinner. Seriously there were enough of the vermin that it very well may have resurrected the Plague (something I honestly wouldn’t put past Herzog). Just incredible. My favorite part–and I would wager most other’s as well– is when the town just goes batshit crazy. They realize that they all have the Plague and are going to die anyhow, so why not just enjoy themselves. Herzog took an entire town square and filled it with maniacs, drunkenly dancing about, wrestling on tables with goats and essentially doing what we all should be doing seeing that we possess certain knowledge of our own eventual death. Sure, it was bedlam, but there was an “ecstatic truth” to the goings on that is universal. While not real, the doomed towns people have a reality to them that is undeniable. We should all be celebrating life, constantly. But we will only do so in the face of certain tragedy. Scenes like this–ones that reveal an essential “truth”–are the reason why I watch Herzog films. That, and the film is just beautiful beyond words.