“Occident: The part of the world lying west (or east) of the Orient. It is largely inhabited by Christians, a powerful subtribe of the Hypocrites, whose principal industries are murder and cheating, which they are pleased to call “war” and “commerce.” These, also, are the principal industries of the Orient.”
~Ambrose Bierce, The Devil’s Dictionary

Matt Cale is about to die…

I had a feeling McDonald’s would eventually lead me to the Olsen Twins [Ed Note: Fucking pervert], although my first choice was Nia Vardolos’ Connie & Carla, her one-week-and-it’s-gone follow-up to the most inexplicable hit of the past quarter-century, My Big Fat Greek Wedding. I’m not sure why the DVD station failed to include Nia’s dud, but I settled for the next worst thing — New York Minute. No part of me actually wanted to see this film, even as I knew that it would be among the most vile pieces of shit I’d see all year. After all, I’d have another contender for my Worst of the Year list, and I could once again prove that my McDonald’s experiment was actually getting worse. I mean really, the Olsen Twins? There were thousands of internet perverts [Ed Note: Like you sick-boy] who celebrated their legal status as they would the Second Coming, and more than ever I’m trying to figure out why. Outside of their clueless banter, their narcissism, and the pedestrian plots that have a nation of pre-teens riveted, these are not attractive young women. I couldn’t help but wonder what these chat room geeks were spilling their seed over. Was it the anorexia? The shapeless masses that passed for bodies? The stringy hair? The doll-like faces that seemed locked in a perpetual, blank pout? At the very least, twins are only slightly below midgets on the freak ladder. There’s something unnatural about them, even when they aren’t joined at the head. But this was the least of my worries; I had a movie to watch.

New York Minute wants desperately to be an old school farce, but it forgets that in order to pull off screwball comedy, one needs charming actors, witty dialogue, well-defined characters, and a story that makes sense, even if it isn’t taken seriously. In this case, the film asks that we believe one of the twins (who the fuck knows which one) is a bookish nerd who is one speech away from securing a full-ride scholarship to Oxford. In order to clue the audience in on her status as an anal-retentive intellectual, she puts on a pair of glasses as she wakes up. Funny, but she never wears them again. Why? Because the character “trait” has been established, and the glasses would get in the way of Ashley’s/Mary Kate’s vanity. This twin is Jane Ryan, and she only cares about grades, success, and good schools, which means that in the course of the film, she will learn that having mindless fun is far more important than brains. The other twin is Roxy, a rebellious chick (established by wearing a Metallica t-shirt) who skips school, plays the drums, kisses Jack Osbourne, and has a vanity plate that says 2QL4SKL (“Too cool for school,” if you’re a mouth-breather). To make it all complete, MTV sexpert Dr. Drew Pinsky is their father. The mother is dead, which is only important in that it forces the girls to say on at least three occasions, “I wish mom were still here.” I’m not sure how the old lady checked out, but I can imagine it wasn’t accidental. 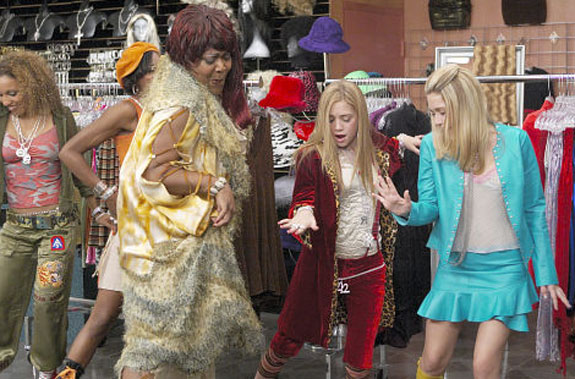 The whole “story,” a term used loosely needless to say, involves Jane’s mad rush to give her speech at Columbia while facing all kinds of trouble, usually brought on by Roxy. For no reason whatsoever, Eugene Levy is on hand as an officer in the Department of Truancy, and he is pursuing Roxy in order to satisfy his curious obsession. Apparently he’s been trying to catch her skipping school for years and has not been successful. Are they serious? Can I ever be again after this review? While Levy is pissing away his career, the twins run into, like, several cute boys (Jane literally smashes into the same guy four different times, which is of course highly believable in the quaint hamlet of Manhattan), Roxy appears in a music video (which we are forced to watch in its fucking entirety), and Andy Richter, using a Peter Sellers inspired Chinese accent, chases the girls to recover a microchip (what else?) that contains several million dollars worth of pirated music. Which is horrendously lame because any geek worth his salt could download that shit for free in two hours. The following then occurs, not necessarily in this order: 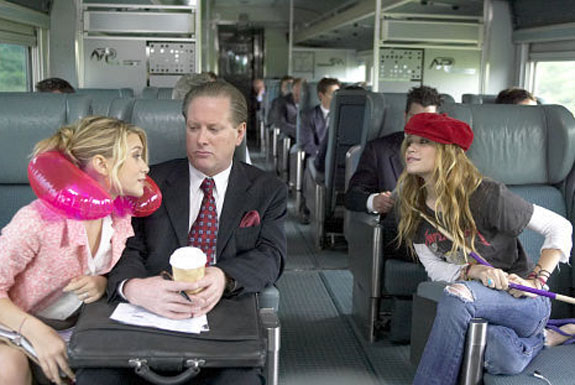 Now, did I mention that the filmmakers use fancy split-screen effects to add to the wackiness? Or that the girls spend five minutes of screen time in a hair salon named “House of Bling,” where we are treated to at least three gross stereotypes, all of which involve sassy black matrons and limp-wristed male hair stylists? And that we are also asked to believe that Jane speaks Chinese? And hey, why not throw in a cameo by Bob Saget, who does a double-take as he sees the twins in Times Square? Or that I stupidly chuckled at the line “Who’s that cracker?” (uttered by the sassy black matron in question as Levy runs by her shop) because it seemed so out of place in a wholesome time-waster aimed at girls with braces and pig-tails? Or that there simply had to be an extended chase sequence involving a taxi and a motor home? But the biggest howler occurred in the final moments, as the scholarship is given to Jane despite the chaos, all because the chairman read the lost notecards and pronounced the never-given speech as “brilliant.” Conveniently, we never get to hear these stunning words, which no doubt would have left audiences in stitches from coast to coast; presumably what they had in mind for the rest of the film.