According to Australian historians and Ned Kelly scholars from the
latter half of the 17th century, many Australians would claim that they
have a large inheritance of rebellious blood, rich with independent
fervor, and strengthened by the pride of the common man.

The truth is that Australia had Ned Kelly–a burly, gun-toting
Irishman who, like any other folk-hero, became the countrys symbol of
nationalism by gunning down a hell of a lot of people. While the Ned
Kelly story is certainly an interesting one, it doesnt make for a
great film, at least not Gregor Jordanss version of it
anyway–especially when Heath Ledger is constantly slipping in and out
of a half-ass Irish brogue. 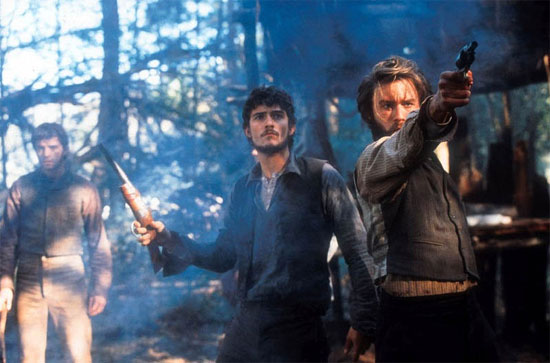 The setting is the north east end of Victoria, Australia,
otherwise known as Kelly country. The timeframe is 1870s to 1880ish.
Essentially, the Irish-British conflict has crossed the ocean to
Australia. The Irish, mostly simple farmers and meat thieves, are again
being subjugated by the English, mostly landlords and snobs.

Ill keep the story short because Ive been drinking.
Basically, Ned Kelly (Ledger) is the man of the hovel he lives in with
his mother, three or so sisters, brothers, and horses. A local
policeman, and world class drunk named Fitzpatrick has a thing for
Neds sister Kate. After being repeatedly humiliated and denied by
Kate, Fitzy gets plastered one night and rides over to the Kelly house
while Neds out fooling around with an Englishmans daughter. Fitzy
bursts in and demands some action from Kate who, of course, calls him a
sniveling coward. Neds younger brother Dan clubs Fitzy over the back
with a chair, threatens him with a pistol, and then throws him out into
the yard.

Fitzy, devastated, scurries to the nearest bar before heading
back to tell his cop buddies that Ned has threatened his life, even
though it was Dan. The police, who already hate the Kelly brothers for
stealing several horses and beating people up, put out a warrant for
Neds arrest. The charge: attempted murder. When Ned finds out the
news, he takes Dan and hits the road, knowing the cops will shoot first
when they come to issue the warrant. The Kelly brothers enlist the help
of two friends, Joe Byrn (Bloom, who looks about as Irish as Jonny) and Steve Hart, and thus the Kelly Gang is born.

The four of them decide to hide out in the bush until things
cool off. But they dont. The police send out a search party resulting
in the inevitable shootout where the police are killed, quite
efficiently I might add. So the hunt continues and the Kelly Gang robs
a couple of banks and the ham-handed police cant find Ned who
continues to flirt with the Englishmans daughter and an 8000 pound
reward is placed on their heads which nobody claims because Ned is
loved by all the Irish people whove been facilitating the four
outlaws. 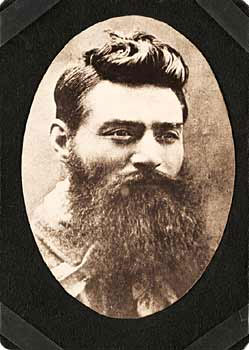 Ultimately, Francis Hare (Geoffrey Rush, who is starting to
resemble Fidel Castro in his old age) along with other high ranking
law-enforcement officials come in from Melbourne to eliminate the Kelly
problem. In the end, the Kellys highjack a traveling circus (which
didnt really happen) and hole up in a ramshackle hotel where they
begin drinking (which most certainly did happen). The Kelly Gang puts on armor that looked something like http://www.ironoutlaw.com/html/armour.html,
and walk out to meet the police who have circled the hotel. A huge gun
battle begins and the outnumbered Gang is forced to retreat. Joe Byrn
then takes a drink from the bar and is killed when the police open fire
on the hotel. Ned storms out for a second round and ends up wandering
out past the police to pass out drunk in a small clearing. The police
torch the hotel where Dan Kelly and Steve Hart are lying on the ground
wounded. The two outlaws decide to shoot themselves (which didnt
happen) and their bodies are found charred beyond recognition (which
was most likely how they died) the next morning. That same morning, Ned
wakes up and begins shooting aimlessly at the remaining police. They
shoot him in the legs, take him in, try him, and hang him.

So what are we left with? Was Ned Kelly a hero? Was he a common
settler who stood up against an oppressive English judicial system and
its corrupt police force? Or was he just a cold-blooded, reckless and
drunken Irishman who used his dimwitted friends to shoot his way into
immortality. Realistically, all the dumb Pattys did was get themselves
and a whole slew of other people killed. So, as an Irishman myself, Id
say that pretty much makes him a hero.

Discuss this review in Mike from Hobart’s Burning Down the Church.

If you can, please help us with our Desperation Fundraiser.