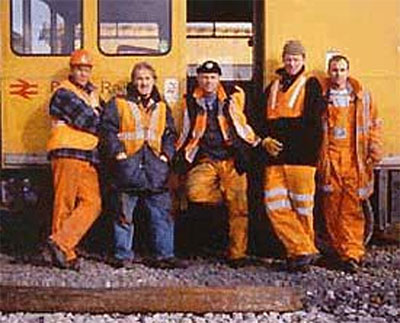 Ken Loach (Sweet Sixteen, Bread & Roses) is one of the few directors around who is angry, left-wing, and passionate, yet never lets his emotions get in the way of a good story. Nor does he let his working class sympathies overwhelm the proceedings, so that character takes a backseat to political grandstanding. Loach clearly looks upon the brave new world of free market capitalism with a skepticism bordering on contempt, but he’s so gentle — so reserved — that you find yourself by his side, even if you can’t quite swallow the naked socialism. But that’s the kind of filmmaker Mr. Loach has always been: agreeable, patient, and kind, even while exposing the heartlessness that threatens to transform a world of participatory citizens into a global network of clients, consumers, and desperate souls begging for bread. Thankfully, Loach doesn’t make the mistake of romanticizing his heroes (they are often crude and boorish), which challenges the audience to sympathize with those we may not want to invite over for dinner. And that’s the dilemma of a Loach film, or any appeal to the lower classes — I might find the behavior of white trash to be repellant and worthy of scorn, for example, but it is towards their economic circumstances and not that of, say, the elites, I almost always lean. And it’s not a matter of being an old fashioned defender of the underdog that motivates my heart, but rather the understanding that those struggling and fighting for every dollar always have, and always will, outnumber those who have managed to achieve financial independence. I realize that I risk flirting with naive, sentimental Marxism with such a remark, but I speak here of cinematic representation — pushing and pulling one’s way through the lower depths holds infinitely more drama than bond trading, idle retirement, and attending readings of assorted wills.

The Navigators is just such a tale; a riveting, ultimately devastating account of what happens to a group of Brits who face life after the privatization of the railroads. Loach, to his credit, does not portray a statist utopia yielding to chaos, for there are jokes aplenty about the often lax standards in place prior to market competition. Workers were used to not always clocking in, frequent (if not excessive) coffee breaks, and a sense that overall quality was not as important as “keeping busy.” Even then, it was more about the appearance of hard work. In other words, take a nap if you must, but do it out of sight. Loach needs to include this angle, after all, for only a simpleminded ideologue would deny that unionism and socialism can often breed laziness and ineptitude. Part of the humor consists of watching these men get used to actually earning their keep, as they’ve been used to a life free of interference and justification. Nevertheless, Loach accepts these drawbacks as part of the deal; men may loaf from time to time, and work may not always be at the peak of perfection, but there are other aspects of labor that go beyond immediate profitability. For example, what of the sense of community and brotherhood? As company men, these people enjoy security, yes, but also a sense of history. In a few brief scenes, we sense how powerful it is to identify with a task; how a lifetime of work, even if repetitive and dull, can foster good tidings among men. Those days may in fact be over, but Loach refuses to let them go without a parting shot.

Loach also takes assorted pot-shots at the new economy. The company changes names (and signs) numerous times throughout the film, which speaks to the insecurity that permeates a free market system. This is both good and bad, of course, but Loach wants us to see that for every Margaret Thatcher singing the praises of efficiency and capitalism’s bounty, there are flesh and blood human beings who must be made to suffer. For every success story, there must be a tale of woe. Future rewards may await a country that adopts this approach, but here and now, there are many permanently left behind. Loach doesn’t push this point into absurdity; he merely states it as cold, dispassionate fact. The men also watch an orientation video, a sequence that perfectly captures the phony, go-go idealism of management types who have mastered the language of taking bad news (pay cuts, the elimination of sick time and pensions) and creating an Orwellian speech of spirited, cheerful degradation. By the end, one feels damn lucky to even have a job, and it’s all thanks to corporate chieftains who have done their best to look out for the working man. This “readjustment” is best defined as a complete reversal in how we view work. In the past, individuals — possessing only their skills and craft — “sold” their labor to eager companies, who were seen as the “receivers” of great talent. Now, the corporate world “creates” positions (out of the kindness of their hearts, apparently) so that we can race to the bottom in order to fill them. We are no longer independent agents, but mere “slots.” The process of gratitude, therefore, has been forever reversed.

Once the rail companies split into dozens of parts that must bid on the open market for piecemeal jobs, the wages decline and the men are forced to buy equipment and uniforms that had once been provided. As one chap relates, by the time his expenses are deducted (gas is not reimbursed, and there are no company trucks), he is earning only a few pounds an hour. And so it must be, right? Competition lowers prices, but workers never benefit by such an arrangement. It’s one of the bitter ironies of modern life that as Wal-Mart reigns supreme, it creates a massive underclass of folks who can only afford the very products they sell. They’ve got you coming and going. The men of The Navigators are in the same bind, as they must cut corners and rush their work in order to stay competitive, which brings about less efficiency, a result in direct opposition to what is initially promised. And after a man is killed on the job, his death must be covered up, lest the powers that be sense a recklessness in the team that will keep them from getting future bids. And how was this man killed? Needless to say, the fatality results from a system of transferring concrete forced upon the men to lower costs, which also raises the risk of injury. But what can they do? Without health insurance or collective bargaining, they are forced to bury their dead and move on.

I have done far more preaching than the film itself, which should not be confused with a dry lecture. These characters are rich, insightful, and so natural that their actions are impossible, really, to classify as fiction. We see men try to feed their families, face the burdens of divorce and child support, move into depressing, cramped flats, and reluctantly accept change at a time when most men are desperate for a bit of rest. Loach isn’t proposing revolution, nor is he begging for a return to the nationalization of industry. He’s merely asking us to look, observe, and reflect — when societies and cultures make choices, there are consequences. Whether we are better off in the end with stagnant wages, declining union power, and bitter global competition remains to be seen. So far, many of the gains are merely theoretical. Often, the benefits are as idealized as communism, which also “looked good on paper.” But economies can be tricky things, and as much as we’d like to believe that an invisible hand removes the human element from the equation, Loach is here to remind us that that which has been built up can also be torn asunder.