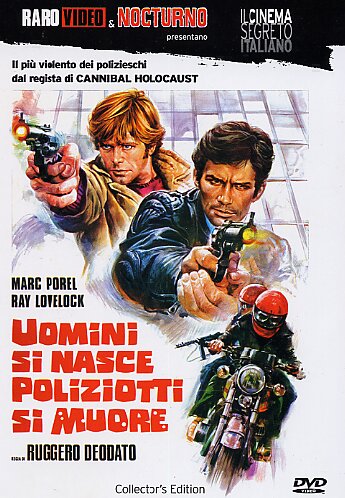 Being a fascist dick is fun. Almost as much as having one. 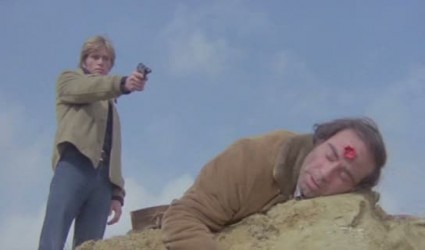 Antonio and Alfredo (whom I’ll call Blondie and Blackie, since it’s never pointed out who’s who) are two members of the Special Squad, a crack  police unit where their delinquent tendencies are an asset rather than a handicap. They are faced with the task of bringing down Pasquini, a powerful and mysterious mob boss whose own merciless methods prove to be on par with theirs. 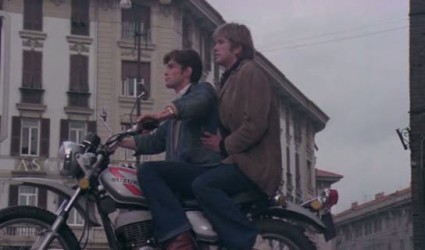 Marc Porel and Ray Lovelock play our handsome, clean cut leads, and that spares me the chore of coming up with inferior equivalents to greasy mustache. They sleep in the same room (!) though not on the same bed (), and ride a motorcycle together, with Blondie on the back snugly clinging to Blackie’s torso (!!). The homoerotic angle seems slightly at odds with them constantly seducing/harassing women, so I’ll just assume they share the same lodgings and vehicle because they are a couple of lowdown cheapskates. It makes sense, then, that they dote on the Special Squad secretary with some roses they’ve just stolen from the hall. Their disgusting miserliness is further confirmed, along with other traits, by this telling exchange with their maid on the subject of her young niece:

Maid (throwing a vase at them): Pray to God she gets her period this month! If she’s pregnant, she’s your fucking problem!

I have to admit I didn’t know whether to cringe or applaud. 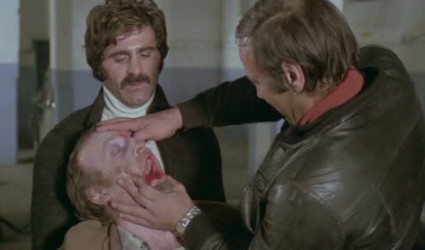 Coming from the helmer of that Cannibal holocaust thing, I expected a treat… and I wasn’t disappointed. The movie is far from gory by current standards, but it has mean-spiritedness in spades. Two robbers on a motorcycle grab the purse of a woman coming off a bank; since the woman has the purse chained to her wrist, she’s dragged along until bumping head-first onto a lamp post, which is followed by one of the robbers kicking the bejesus out of her as if that would break the chain. A guide dog is run over, leaving its blind owner stranded in the middle of a crossing. Blondie and Blackie leave two hapless bouncers bound and gagged on the ground, douse gas in a circle around them and light it just for kicks. A treacherous heroin addict is punished by Pasquini’s henchmen by having one of his eyeballs pushed into his skull. A couple of low-ranking thugs are tied to a ceiling beam and used as punching bags during an interrogation, with Blackie casually grabbing and twisting their nuts at the same time (!!!) 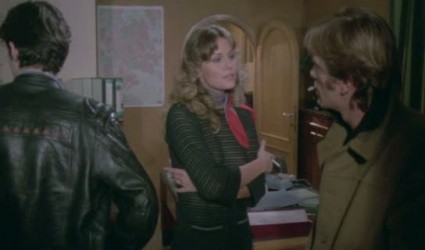 Good-spirited, knowing and likely satirical, but misogynistic nonetheless. Flirting with the pretty secretary, Blackie uses the opener, which one of us will you fuck first?, which of course doesn’t work, just as it didn’t work when I used it,  pointing to my reflection in a nightclub mirror. The secretary (played by Deodato’s then wife and occasional nude model, Silvia Dionisio) is a college type who drops words like phallocrate and argues that women are the strongest sex, as they can easily outlast men in the sack; Blackie retorts by reasoning that such thinking can only come from having too many lousy lays in the arms of wimps. He doesn’t say it, but most women just lay on the bed and leave all the effort to their partner would have been valid, too.

According to this movie, there exist no more than two kinds of women: either elder matronly types only fit for housekeeping, or nubile bimbos always ready to expose their tits. One of these is Pasquini’s nymphomaniac sister (played by Deodato’s then sister-in-law and occasional nude model, Sofia Dionisio… what? …) In one scene, she answers Blackie’s questions with some offensive remarks about his mom, which prompts a slap that lands her on a bed and gets her robe open, accidentally-on-purpose. After the expected fireworks, she still hasn’t had enough and gets on with the eager Blondie, who soon starts screaming for rescue from her ravenous embrace, but… wait a minute, that actually supports the secretary’s views! The misogyny was a false flag: this movie has a feminist agenda! Unbelievable! Has the whole world turned omega? No way Cannibal holocaust can be more shocking and offensive than this.

(Also, it’s got nothing to do with the film, but searching images of the Dionisio sisters I found out that the Italian equivalent of Playboy magazine was called Playmen. Thanks Google)

Regular police have to follow standard procedures and respect the criminal’s rights, but those limitations don’t apply to the Special Squad. They enjoy some bureaucratic leeway, benefit from good intel and trustworthy tips, and it’s mentioned as a sort of big deal that the government has got them one computer. Still, no amount of resources can ever hope to substitute for B&B’s zeal and marksmanship. For them work and free time are interchangeable, as their target practice includes both soup cans and armed scoundrels. They successfully prevent crime by resorting to their own subtle strategies, such as using suppressed pistols to murder five would-be robbers in the middle of a crowded street before the felons have time to commit anything. Forget Minority report and that precog bullshit: all an efficient police force needs is a Coleco and two trigger-happy executioners standing above the law. And out for a shitload of kills.

Blondie and Blackie have a Stupid Chief of sorts, who is less pissed off at their methods than slightly annoyed at having to write fake reports for his superiors. Of course the guy secretly endorses the mayhem, but has to keep up appearances and lecture them like a bored teacher burdened with a couple of naughty kids. Quote du chef: The Special Squad number one rule is to never put people at risk even old people. 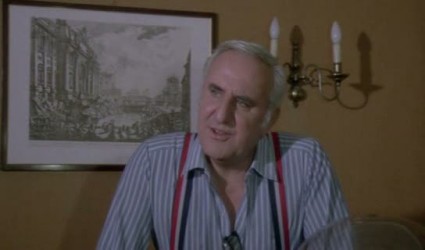 19. Novelty death: a baddie on a motorcycle gets shot and crashes into an oncoming car, goes flying over the roof, and as he falls on the other side another oncoming car crushes his body against the first. Fake Technicolor blood spurts from mouth. Me happy. 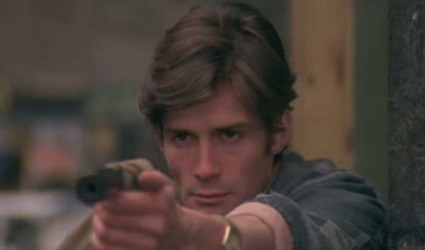 I don’t know what live like a cop, die like a man is supposed to mean, except that the original Italian title has it backwards. Which makes a little more sense, I guess, but not that much. The movie itself is a lot of fun… and something else. Though cheap-looking, there are several well executed set pieces, including a thrilling motorcycle chase at the beginning that looks to have been shot wild on the streets (I’d be surprised if no stuntman or passerby was injured), but I’d argue that the film gets most of its charge from being sneakily subversive.

It would not be that much of a stretch to call this the Starship troopers of buddy cop movies. The contrast between the lighthearted mood with which the cartoony plot unfolds and the brutal violence that goes with it is perverse and intentional, as is the sight of our dreamy-looking heroes behaving like appalling louts. The elements may be formulaic, but it’s hard to ignore that there’s something amiss when injured or surrendering criminals are shot in cold blood and nobody raises a fuss about it. Deodato is cunning enough to never state it explicitly, and the dead giveaway to his stance is the complete absence of sanctimonious speeches justifying police brutality. The function of such righteous crap is to prevent the viewer from examining his thirst for blood, by means of appeasing to his skewed sense of morality. Deodato’s approach is to make it clear that for these guys shit just never, ever gets real, and that happens to be the most honest take on this kind of material. 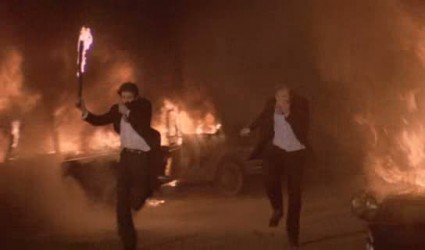 Romantic folk ballads sung by the blond guy? Yep, and they make an enjoyable and effective contribution to the mismatch between style and violence. Add the prerequisite jazzy and funky backgrounds for the action bits.