John Turteltaub, director of such unsung masterpieces as 3 Ninjas and Disney’s The Kid, is surely not to blame for the failings of his latest confection, the out-of-breath National Treasure. As this is a Jerry Bruckheimer production, Turteltaub no doubt moved around set pieces and darned Nicolas Cage’s socks while J.B.’s ham-fisted vision dominated every step of the way, from pre-production to the final wrap in the editing suite. Even the screenplay isn’t as bad as one would expect, and (gulp) I hesitate to say that it started with a pretty good idea. Perhaps it reeks of post-Da Vinci Code conspiracies, lost treasures, and historical mysteries, but one could do worse than sending historians and fortune hunters around the world in search of a map and the cryptic codes of the Founding Fathers. And for once, I won’t say that my intelligence was insulted because, I fear, the filmmakers didn’t aim that high to begin with. This is the sort of film that throws around important names and things — Ben Franklin, Paul Revere, the Masons, the Declaration of Independence — yet doesn’t deal intelligently with any of them, as it assumes the audience wouldn’t really care anyway. It’s enough, apparently, that we recognize them in passing, as the illusion of knowledge is usually enough to send us from the theater with the belief that we’ve seen something a little more substantive than a chase-filled slab of escapism. 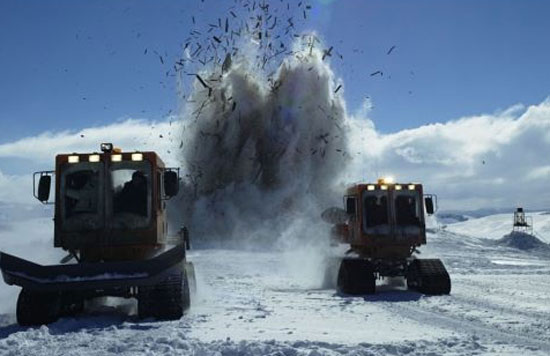 Nicolas Cage is Benjamin Franklin Gates, an obsessive historian who has been pursuing the secrets of America’s past for years, much to the chagrin of his father (Jon Voight), who once “believed,” but has now settled into bitterness and cynicism. As we begin, Gates and his team are at the Arctic Circle, where they discover an old ship buried under the ice that is thought to hold the key to the entire mystery. Alas, they only find another frustrating clue, which leads to a break in the team, and the first of several predictable “twists” is revealed — Gates must now compete with his ex-partner Riley Poole (Justin Bartha) for the big prize. Gates, is, of course, the more responsible of the two, as he wants to discover the past in order to protect it, and have it displayed for everyone; his evil rival wants to get rich and secure worldwide fame. As we know, this split is necessary, for how else would Bruckheimer shoehorn car chases, kidnappings, gunfire, and damsels in distress into the story? After a big-ass explosion and betrayal in the snows of the Arctic, the race is on to steal the Declaration of Independence from the National Archives, despite the fact that it is one of the most heavily guarded documents on planet Earth.

Both men arrive in Washington D.C. at the same time, needless to say, and while Gates is more methodical and MacGyver-ish, Poole practically blasts his way into the building. Gates finds the document first, which isn’t as difficult as might be imagined, for it has been left all by its lonesome in some back room. Gates picks it up, runs out, and blocks Poole’s gunfire with the bulletproof glass surrounding the precious artifact. As this transpires, the usual suspects are brought into the mix — phony documents that are first thought to be the real thing but are actually copies from a gift shop, prompting the bad guy to pound a nearby object with his fist; a government worker (at the National Archives) who is immediately converted from skeptic and “company man” to a fellow fortune hunter; and the “revelation scene,” where our hero grabs a few lemons and a little advice from dad to spring forth the code on the back of the parchment. Still, Gates remains stumped, although he knows that the number combinations connect to Franklin’s famous “Silence Dogood” letters. This leads to Philadelphia, where more pieces of the puzzle come together, including a bizarre “decoder” pair of glasses, additional riddles, and a buried secret near Wall Street and Broadway in New York. 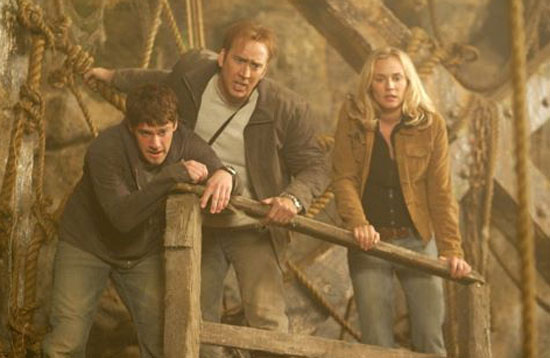 Again, this could have been a semi-intelligent thrill ride, especially since we’re dealing with a delightful blend of fantasy and fact. Unfortunately, Bruckheimer weaned (and will always wean) at the teat of diminished expectations; where attention span, credibility, and thoughtful pauses are treated as cancerous invasions of the always vulnerable, yet always expanding, body of populist movie going. Take an instance where Gates pulls out an item he stole from his father before running away to elude the FBI — a few hundred dollars tucked away in a copy of Common Sense. Again, I’ll set the scene: Friday night, a mall theater, and an average age of 18-20. I can only imagine what the typical dullard in the building thought, but I’d be sure to clean up my own stash of cash if I were to bet that no one had any clue about Tom Paine. But given that Bruckheimer believes that filmmaking is doomed to failure unless it packs more cuts per minute than anything previously seen (and he sets this as a goal for every new picture), the Paine reference is a pointless blip; something tossed in simply because the actors had to be talking about something. From the opening bell, this movie never stops moving. In fact, the pressure only builds, even to the point where we think the whole thing might explode. But when we reach the climax and find out that the treasure wasn’t a mere legend after all, we’re let down because none of the artifacts make any sense. Sure, there appears to be a thing or two from ancient Egypt, and some reference is made to a “text from Alexandria,” but no one ever takes a breath to give us even basic information. I’ll accept that National Treasure should be popcorn silliness, but what harm would it have caused for some academic to have coffee with Gates so that we are brought inside the tent?

Even Harvey Keitel shows up as a lawman, but he brings nothing to his limited role that couldn’t have been replicated by a less expensive character actor. Interestingly enough, Gates claims throughout to be “all about the history,” yet by the end he accepts a sprawling estate as a reward for his find (securing a deal with Keitel). He even gets the girl, the chick from the Archives, who is arguably the most attractive women ever to work in the public sector who wasn’t also chugging cock to secure passage of key legislation. Let it be said that she (Diane Kruger) is one bad actress, even if she’d still be interesting scrubbing up in the shower with a loofah/falafel. Since this is PG Bruckheimer, however, skin exposure is kept to the barest of minimums, which is usually the only saving grace in a film of this kind. At least there’s that one scene where she’s arguing with Cage about taking the Declaration of Independence back to the authorities that immediately enters the bad movie lexicon. At that moment I had to remind myself that I was watching two, semi-coherent adults rather than screeching infants fighting over a pacifier. 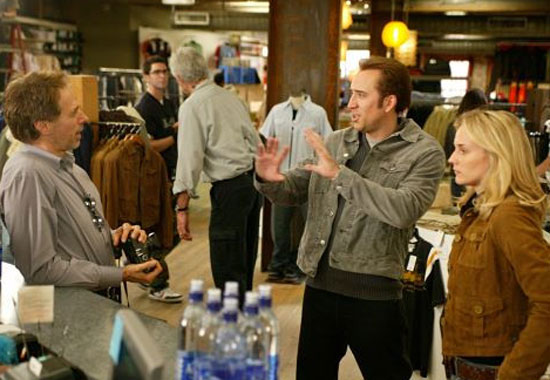 So while it could have been a whole lot worse (and should have been), it might actually entertain a few less discriminating viewers. I’m always enraged by films that use history as a lazy plot device rather than deal with its implications (Forrest Gump being the all-time king), but the sort of conversation I might enjoy would necessitate a non-moving camera or perhaps a voiceover. Ain’t gonna happen with Jerry on board. And I continue to be baffled by Cage’s career (this fucker won on Oscar?), and in many ways he remains one of Hollywood’s least reflective actors. His characters lack an inner life to such an extent that they are reduced to spitting out words that either groan with predictability, or creak and wheeze with irrelevance. But as his delivery (and appearance) always reminds me of some auto mechanic who just got hit in the head with a shovel, I imagine I wouldn’t buy his shit even if it was crafted by a screenwriter with talent and vision. And in case I haven’t convinced you, I’ll resort to a cheap shot to keep you away: National Treasure was described as a “perfect film for the whole family” and one of the year’s best by no less an expert than Michael Medved. Yes, that Michael Medved. The right-wing fanatic who lives in liberal Seattle; the Jew who loves Jesus.