Written by these two boneheads: Jay Sherick and David Ronn

With – Martin Lawrence as Earl Montgomery
– Steve Zahn as Hank

Having the afternoon free, I decided to catch a movie, preferably one that would provide adequate fodder for an especially Ruthless Review. The noon hour is rarely a time for a thinking man’s picture, so I deliberately chose something mindless and if I was lucky, humorous in a guilty pleasure sort of way. I decided to forego A Guy Thing (perhaps another time) and selected National Security, the latest in a long, long line of action-oriented buddy cop films. Starring Martin Lawrence as Earl and Steve Zahn as Hank, National Security is just that sort of film that keeps me up nights – far too harmless to get upset about, yet so benign and boring that it becomes as difficult to work up a sufficient rage for its incompetence. I sat stupefied that this screenplay was approved by anyone in the chain of command, because it is no exaggeration to say that not one second of the film contains an ounce of originality. It might have worked as a tongue-in-cheek spoof of such films (even that genre is tired, but at least there would have been some level of self-awareness), but instead the filmmakers are playing it straight. They want to believe that we haven’t seen this crap thousands of times before. 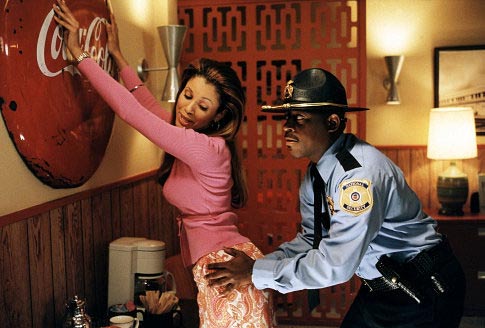 Earl is a loose cannon who is thrown out of the police academy for his bad temper and even worse attitude. Hank is a brooding cop in the LAPD who watches his partner get killed and then vows revenge. In the days following his partner’s death, he finds Earl with his hand through the window of a car and assumes he is stealing the vehicle. Earl pulls an attitude, accuses Hank of being a racist (in the first of at least 300 racial jokes, none of which weren’t covered in Beverly Hills Cop), and the two scuffle. A bumblebee flies into Earl’s face, Hank tries to swat it away, and a man in a nearby park videotapes the entire episode, which of course looks like another Rodney King type beating. It continues. Hank is convicted of battery, sentenced to six months in jail, and upon release, is forced to get a job as a security guard. He continues to pursue the killers of his partner and in the process, interrupts a robbery at the very location where Earl also works as a security guard. In order not to bore you further, the two team up, continue to bicker, and expose a vast criminal conspiracy involving dirty cops, a stolen atomic alloy worth millions of dollars (that has been melted down into beer kegs for easy transport), and a criminal mastermind played by Eric Roberts (with a blond dye-job). Needless to say, the two former enemies are given new posts in the LAPD and the film ends as they fight crime together on the streets of Los Angeles. There, I just saved you eight bucks. Now log off the computer and do something else with your time.

Do I really need to tell you that characters run across the screen in slow motion as they fire their machine guns? Do I need to reveal that as one of the characters is facing certain death at the hands of the villain, the other comes to the rescue at the very last moment? Or what about the character that is “shot” (and screams and cries and talks about dying) and is later told that the wound is only a scratch? And of course, need it be mentioned that Martin Lawrence is playing yet another character that obsesses about race and recycles jokes that might have been deemed “risky” in the Ford Administration? How about the uptight white man partnered with the crazy black man? Ticking them off one by one, the clichés pile up like the blood clots in my tortured brain. Still, I wasn’t angry. This film does not reveal anything about the American people, nor is it a “sign” of anything wrong with the state of the culture. It merely occupies a space in time and will be instantly forgotten by all who view its contents. Either excite me with cinematic brilliance or infuriate me with true, soul-crushing horror. To go through to the motions to this extent merely sends me walking from the theater, no worse than when I arrived, shrugging my shoulders with an expression that will be gone by the time I start my car. 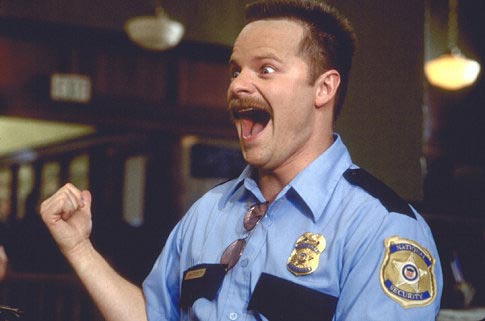 Still, I do have something to say about my fellow patrons. Picture this – I am alone in the theater with only a few minutes until show time. Because it is one of life’s true pleasures to see an afternoon film without anyone else around (truly alone), I smiled in anticipation of my private, exclusive screening to come. Before my grin subsides, I watch a family of five (one mother, four young kids) walk in and, in an empty fucking theater, plops her brood down right in front of me. Hundreds of other seats available and the dumb bitch decides to subject me to her horrible, wretched family. I am simply too stunned to move. I could sooner understand the mind of God before I could penetrate the thought process behind such an act. I realized, of course, that I was not in a screening of the latest Merchant/Ivory film, so one must lower expectations, right? Then, at least fifteen other people tumbled in, making it to their seats just as the previews began. Without exception, they were all young boys, ready to watch the expected gunplay, titty action, and jokes. While I did hear a peep now and then from the brats in front of me, the rest of the crowd was strangely, eerily quiet. No one, it seems, was having a very good time. It all made sense to me. Perhaps these young men, like so many other Americans, do not go to the movies for any reason whatsoever, least of all to be entertained. The movie house is a place to kill a few hours, be “seen” by fellow young people, and have something, anything to talk about the next day at school. It is where people desperately search for that elusive common experience. Or perhaps not. I don’t know. I just need a nap and a little something to dull the pain.