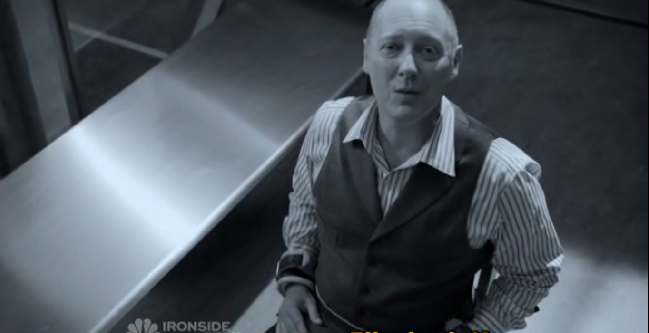 So whats this one about? From the commercials I know that its about a genius supervillain who is taken into custody and then snitches on other super criminals.

Thats about it. Also, he only wants to talk to one person: a rookie FBI agent (Megan Boone). It seems like maybe she is his daughter and nobody but him knows it, but that would be so obvious that I think it could be a red herring. Every week they take on a new supervillain from the blacklist.

So far, it is. Its basically a USA show, like Burn Notice or Psych, but with a network budget and a big star. Its derivative–Silence of The Lambs set in the national security state–predictable, superficial, fluffy and pretty well done. I can see it running out of steam  if the weekly stories get old. This week, human trafficking, next week chemical weapons the week after that, terrorists. Its all basically the same thing. Its harder to pull that off for a long time, like Burn Notice did, than to have specific mysteries to solve each week like Psych.

But maybe they can do it. If they build up enough episodes, itll become a good show for streaming yourself to sleep. James Spader sure is entertaining… blahblahblah… terrorists…. blahblah security clearance… blah fed e ral ag ent…zzzzzzzzzzzzzzzzzzzzzzzzzzzzzzzzz.

I dont mean it that way. For one thing, I value shows to fall to sleep to pretty highly. Im sure the show is meant to be cartoonish, disposable entertainment. Not everyone gets to play quarterback, or even left tackle. You need a good, solid right guard out there. Nothing wrong with that. I wish that I was a right guard, or a writer for this show.

Take the big action scenes. Theyre basically collections of stuff weve seen before. Workmen pull out hidden machine guns and become terrorists. Black SUVs careen about a bridge. There are milk jugs half full of pinkish liquid, which we now recognize as unconventional and therefore more sinister bombs. You think youre safe in a big truck, but then a bigger truck smashes into you and bulldozes your truck for 50 yards without killing you. Yeah, weve seen it all before, but its fun to see it again.

Exactly what youd expect. Hes the same character as he was in the last show,. Spader 2.0, Shatner 4.0. A grand ham who is a spectator of his own performance. If he were English, theyd make him a knight and Americans would praise his theatrical style.

Its an interesting career path because, if Spader never had his big break as a young man and still had the confidence to pull this routine AND somehow got cast in the role, wed all be like who the hell does this guy think he is?

The only way the Shatner/Spader phenomenon can happen is if a talented actor has success early, and has a particular demeanor and mannerisms that people sometimes make fun of. Then he fades a little bit, but everyone remembers him because he was so peculiar. He also has to have the ability and confidence to perceive himself through the eyes of others and riff off those perceptions as he makes his comeback. Then everyone says, that is SO James Spader! and he makes ten times as much money as before.

As an anti-American devil worshiper, were you troubled by a television show glorifying the security state?

Well, its all very cartoonish. So theres the assumption (at least so far) that the national security state really exists just to protect us from a wide array of bad guys who, for some reason, did not exist until the powers that be decided they wanted a security/surveillance state. And it doesnt seem like its supposed to be a joke. Theres a scene where some intelligence officials agree to bend the law and one of them says, one day well be discussing this moment in front of a congressional committee. The layers of willful naivete and pixie dust in that line were kind of charming.

The scene is especially funny because the rules are being bent to protect people, rather than as the usual, naked power grab. The idea of congress coming down on NSA types for slightly violating procedure made me think of Mr. Lisa Goes To Washington, when the congressmen are aghast to learn that a little girl has lost faith in democracy! and the righteous apparatus of our system snaps into action to purge the one corrupt member of congress.

But then, what is a fluffy show about this subject supposed to do? I guess they could inject some subtle satire about mass surveillance, which I would like. It seems like all they really want to do is show us a bunch of technology and important people, though. You could say that such a passive portrayal of these realities conditions us into accepting the security state in a small way. But maybe theyll show the other side of things in future episodes.

So the feds arent portrayed as incompetents?

One the one hand, you have the Sorken/Spielberg device where everyone is constantly spitting out resumes. This ones peach. He was top of his class in science at MIT, made millions in the Silicon Valley and almost dunked a basketball once, but then he went rogue… So this exhibits a lot of faith in institutions and traditional arbiters of merit and status. But these resumes always belong to bad guys and outsiders.

Those who actually work for the government, though they surely have similar credentials, are mediocre at best. The outsiders are always able to outsmart them and are always one step ahead. For example, Spader is only captured because he wants to be and he constantly toys with the feds as he helps them. Its clear that he could escape any time he wanted to just by pretending to throw a tennis ball one way and then running the other.

So in these areas you could say its a conservative show. The military/security apparatus intend to do good and enemies of the American government are evil ones. But the government itself is ineffective.

Why is that so appealing to people?

Part of the appeal of this theme (stupid chiefs, bungling feds, the wunderkind who is effortlessly smarter than his professors) is that, even though we didnt finish at the top of a class at MIT and become rogue weapon designers, we like to identify with the brilliant renegades, not the fumbling bureaucrats. We like the idea of someone operating outside a hierarchy that doesnt recognized true greatness. We like the idea that these outsiders were too good to succeed through traditional channels. Its the same part of us that comes out when we agree with our co-workers that our boss is bad at his job. He couldnt possibly hold that position because he is better, more qualified and harder working than we are.

All of this coincides with what Reagan tapped into so successfully: touting the incompetence of regular government agencies and suggesting to the common folk that they knew better, while simultaneously insisting the military and CIA should be given carte blanche.

So youre saying this show is propaganda?

Not really. I mean, no more than characters in a casually made fifties movie spazzing out about Communists or marijuana cigarettes. Its just a product of the times. You know, I was playing poker recently and they had CNN on because someone wanted to watch me slip into madness. They were talking about the mall attack in Kenya and their main focus, hour after hour, was some character called The White Widow who they obviously 65% made up. An attractive white lady terrorist supervillain. And they kept showing headlines like, Kenyan officials say its impossible to rule out the participation of White Widow in attacks. And obviously, the underlying idea was that our Seal Super Action Teams might capture the villain or some shit. I pulled the TV off the wall and threw it off the top of The Stratosphere and it landed on the head of a vacationing Anderson Cooper.

So I guess its just all part of the same story. The producers of The Blacklist are probably liberals, and this is just the context for a cartoon to be set in at this moment. These are the narratives were choosing to invest ourselves in. In the 80s you got, say, Nikolai Volkoff and The Iron Sheik. Now you get this. Obviously, Nikolai Volkoff and The Iron Shiek were more entertaining than The Blacklist, but Ill watch the next episode.