Michael Tucker’s fundamentally dishonest documentary about American forces in Iraq tries desperately to appear anti-war, but instead comes across as state-sponsored propaganda, or the sort of thing that might air on Oliver North’s FOX program War Stories. Consisting mostly of verite (the filmmaker follows the soldiers around Baghdad, conducting raids and the like), although the occasional bland comment springs forth on the soundtrack. Mind-numbingly repetitive, it provides no less than three-dozen encounters with IEDs (Improvised Explosive Device), although none are shown actually exploding. When asked why the film did not show any casualties, the filmmaker replied, “I consider that ambulance chasing.” In reality, the gutless bastard was most likely denied permission to show the real effects of war, as it would have been impossible to ride along with soldiers unless he agreed to the Pentagon’s rules and regulations of sanitizing combat. Moreover, the soldiers — despite displaying their ignorance, vulgarity, and racism at every turn — are depicted as walking saints, even though we never see anything that would prove such an assertion. My belief is this: one cannot simultaneously denounce a cause and support the agents that carry out that policy. 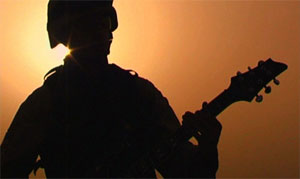 And are these really America’s finest? You know my take (read my rant “Fuck the Troops“), although Tucker is convinced that these boys are the pearls of wisdom amidst chaos. The film would like to believe that these sweet young men and women are “just following orders” and as such deserve our full support. But I ask you — could the same thing not also be said of the Iraqi insurgents? The deluded teenagers who strap bombs to their chests don’t come up with that shit all on their own, either. And when the director was challenged (by my wife, thank you very much) on the inclusion of an especially distasteful scene (a dippy soldier plays dress-up and mocks Arab culture), he responded with self-righteous rage and a standard non-answer. As a man shouted quickly thereafter, it would have been no different had a soldier put on blackface and sang “Mammy.” Funny, but I doubt that would have brought about the same chuckles from the audience.