I’ll tell you one thing, I am getting damn good at walking into a video store blind and grabbing better than expected foreign films. First, I hit a homerun with Kitchen Stories, one of the best films I’ve seen in a while. Today it was Gun Shy, an attention grabbing German flick about love gone dark. I’ll call it a ground rule double. This one is just not as good as Kitchen Stories, but then few films are. However, Gun Shy has several good features and is definitely worth your time. Chief among them is the descent into madness and rage that protagonist Lukas (Fabian Hinrichs) goes through. Er, maybe the chief good feature is the rack on the antagonist, Lavinia Wilson. Tough call. Either way, one of the things I love most about knowing absolutely nothing about a film and then watching it, is that you do not know what to expect, so the surprise factor is always greater. This is one of the reasons I typically skip past trailers. I just don’t want to know. With Gun Shy, through the first half-hour I thought it was going to be a sweet, romantic comedy. Man, was I ever wrong! 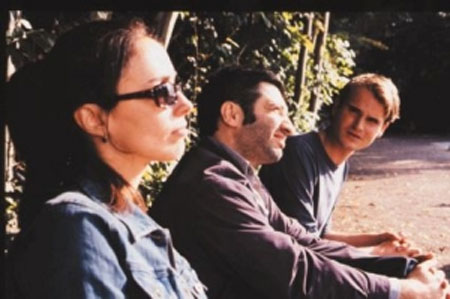 Still, to my eyes at the time it just looked like innocent kid stuff. Two young people fumbling around in the dark. Nothing could be better or any more fun. The stuff of life, so to speak. However, Isabella begins acting strange. The relationship goes from her playing hard to get to her acting very mysterious and frankly weird. Finally, after she just up and leaves him at a bar, Lukas follows Isabella to a dojo where he discovers that she takes kendo classes. He smiles and goes outside to wait for her. But when her class leaves, Isabella is nowhere to be found. He goes back inside the dojo and discovers her getting fucked from behind by a man twice her age. Lukas says nothing, shuts the door and leaves. In what is the most surreal and funny part of the film, Lucas winds up getting drunk at his neighbor’s apartment. Turns out the guy has a North Korea fetish and things Kim Jong Il is a genius. He plies Lukas with snake whiskey, a drink made from sticking a live venomous snake into a whiskey bottle. Lukas gets hammered, steals the bottle, the Kim Jong Il statue and some night vision goggles and goes rowing. He’s so tanked that he crashes and sinks the boat and has to seek shelter and warmth (and a blowjob) at the aged hooker’s joint.

From here the film goes really sideways, as it turns out that the man fucking Isabella in the dojo is her step father, a creepy motivational speaker. Lukas falls more and more in love with her and begins to in effect stalk her, as she starts to have less and less and finally nothing to do with him. At the same time, the police start poking around because of the stolen and subsequently sunken rowboat. The cop is convinced Lukas is the culprit, and that his is planning something big. Lukas admits nothing. Concurrently with all of this, Lukas befriends one of his clients, a one-eyed sniper who fought in World War II. I won’t give away any more of the plot, as it is good, surprising and even a bit shocking. I want to pause here and talk about Laviani Wilson who plays Isabella. She is a real natural beauty. Captivating in a very sexy, rare European way. And her breasts–which we see plenty but not enough of–are just about perfect, as far as boobs are concerned. Definitely worth checking out. Gun Shy as a film, is a real treat, too, as we get to see the evolution of Lukas from basically a shy boy who has trouble killing bugs to, well, rent it and see for yourself. I quite recommend it.