Come clean — aren’t you regretting a return to the Shithouse right about now?

Considering what I’ve endured in the preceding weeks and months, I never expected to be bored out of my fucking skull. I’ve been distracted, frustrated, even suicidal, but never completely numb to the world. Again, as I wasn’t watching Antonioni, I have no reason to be saying this, but I have no idea what I’ve just watched. No clue whatsoever. Images seemed to be flickering, and when I put my ear up against the DVD player, I could hear what appeared to be a spinning disc, but… nothing. It’s perhaps the first genuine black hole of the cinema.

Still, you had to love it when Bill Pullman jumped to his death before the opening credits, right?

For that, I give Pullman eternal kudos. As the film crawled along, he wasn’t showing up again to explain himself. I came out of my trance for a moment and considered the possibility that I had just witnessed one of the greatest cameos in film history. Alas, he returns not as a zombie, but in a flashback — you know, the kind of flashback that could be a dream or even the present, but in the end, doesn’t matter in the slightest.

Not even the faintest hint of cleavage, I’m afraid. She finds something creepy in her hair, but I couldn’t tell what it was and the film never bothered explaining. Given how out of place the whole segment was, it appears that it was nothing more than a cynical teaser to convince the male audience members running for the exits that they just might get a little shot of flesh and as such, should stick around. The poor saps never had a chance. 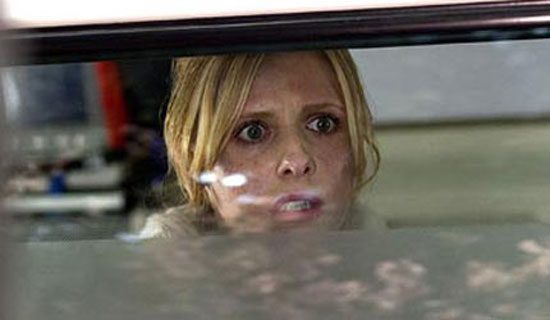 Oooh, but weren’t you freaked out? Even a tiny bit?

Having never before seen rustling leaves, oddly timed wind gusts, shadowy figures in the background, or hallucinations in train windows, it’s clear that I should have been terrified, but it was enough for me to swallow the final shot of a blue arm falling from a morgue slab, a battered Gellar, and the zoom shot of an evil eye that promises an equally heinous sequel. Oh, and the realization that this movie took home well over $100 million did produce a shiver or two.

Who in the hell was that old woman who slept all fucking day in the middle of the room?

She was somebody’s mother, but I don’t know the details. I guess she is connected to the strange cat-boy who was found behind the wall, or perhaps the hottie who was swallowed up by her bed. Gellar seemed to care for her, so that might point to something. Any way you slice it, I didn’t have the pleasure of watching her savagely beaten with a sack full of billiard balls.

You’re just being your typical dick self, right? This story had to lead somewhere?

I kept expecting some psychiatrist or wise old sage to show up and announce that the cat-boy had been raped and tortured, but the only one who seemed to understand the story was a detective, who (of course) died once he was about to tell them (and us) the truth. Hell, I would have been fine with the revelation that the house in question was buried on an ancient Indian burial ground or something. So, a dick? Yes. Leading somewhere? No.

As this involves several women going crazy, can I assume that they receive scary phone calls?

At least two chicks pick up the phone only to hear screeching and moaning, then a quick hang-up. Shortly after these calls, the chick is either attacked or killed outright. You know, like The Ring, only without the insistence that a story was being told. 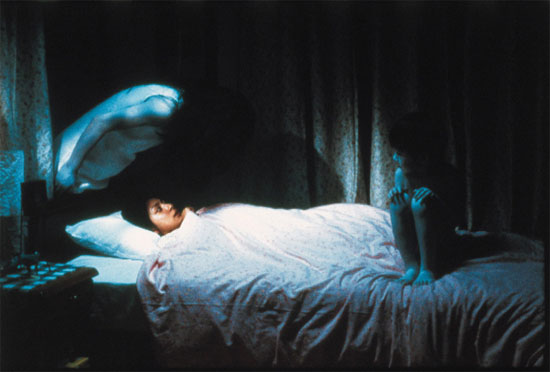 And what about the book with the crazy drawings and rambling essays?

Inevitably, every horror film these days has a mysterious diary or notebook that is filled with chicken scratch and incoherent symbols that somehow reveal the essence of the universe. Think Se7en. Thankfully, this film only introduces such a book, but doesn’t bother connecting it to anything that follows, except for the fact that it promises a terror that never transpires.

So you watched this movie from start to finish despite your misgivings?

Why yes, except for those 20 or so minutes where I refused to let up on the scan button. And only after that cat-boy scared that woman into a Terry Schiavo-like state.

So there’s no way to relate to the story of a creepy, endlessly irritating young person who follows you around until you throw up your hands and go completely fucking insane?