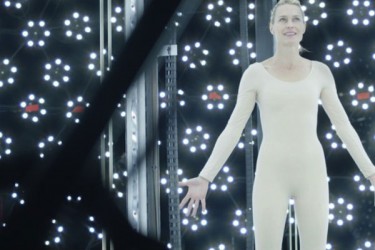 Beyond the green room and into the Matrix…

Fair Value of The Congress: $48.00. I am fortunate to exist in a context and a time where I am allowed to enjoy this film. Best thing I’ve seen in theaters this year. A singular realization of the fullest potential of animation, comparable only to Fantasia and Paprika.

The Congress is a half-animated/ half live action adaptation of the novel The Futurelogical Congress by Stanislaw Lem. Explaining the convolutions of a Lem novel is an exercise in confusion, to the extent that Phillip K. Dick believed Lem to be a communist conspiracy to destroy science fiction as a genre. The film is about two Kurtzweillian singularities, and one woman who lives through both experiences. Reality is turned on it’s head by augmented reality, and then revolutionized again by advanced neurochemicals which are to the medications of today as fusion reactors are to windmills.

Aging actress Robin Wright (playing herself) is pressured by her agent (Harvey Keitel) into signing a contract with Miramount studio bigwig Jeff Greene (Danny Huston). Miramount shall be allowed to digitally scan her likeness and psychology. In exchange, Robin must agree never to act again, and shall receive a massive amount of money. It is the evolution of the phenomenon that now revives Tupac Shakur to dance for us. The studios have achieved their dream- by having a captive pool of digital avatars, there is no longer a need for actors or stars or comedians. Or musicians.  Robin Wright disappears into the SouthLand.

Twenty years later, she is summoned by Miramount Studios to renew her contract. The negotiations shall take place at the Abrahama hotel, which is also hosting The Futurist Congress. And now the studio wants a new contract: they already have the rights to Robin Wright the actress. Now they want the chemical of Robin Wright. They want to create a chemical persona of the actress: swallow a pill, and you too can become Princess Buttercup (or Jenny from Forest Gump). Why watch your favorite celebrity, when you can take a medical prescription to be your favorite celebrity? When everybody is allowed to be anybody, nobody will bother to be a Somebody. 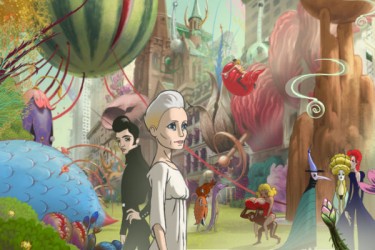 Visually, I can liken this film to the experience of living inside of Hieronymous Bosch’s The Garden of Earthly Delights for two hours. Director Ari Folman has a cartoonish style of his own, indebted in equal parts to Disney and Al Hirschfield, Chuck Jones and Dave Fleischer. It’s a cartoon phantasmagoria, a nightmare of a world where perfect virtual freedom has caused mankind to forsake reality for a childish fantasia of augmented reality. In the future, The Congress suggest, the media/entertainment complex will transform all of us into their target audience, a perpetual adolescence of rapacious immortal children. Absolute freedom is the opportunity for absolute immaturity. 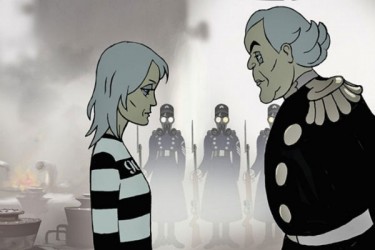 Hollywood always was a bunch of fascists…

In Perfect Capitalism, Productivity Replaces the Need for Humanity

Economists at Oxford have estimated that technology will enable the automation of 47% of all jobs now existing. The executives of Miramount in The Congress are the evangelists of this crusade. Films without actors! Without directors, writers, storyboard artists, graphic designers, cinematographers. Cinema by algorithm, programmed to appeal to the lowest common denominator. The younger generations of the West are dying upon the dessication of the white collar job- the way by which paralegals and assistant managers are going the way of steel-workers and coal miners. Who needs an accountant, when you have Paymo? Who needs a doctor, if you have WebMD? Who needs anybody?

It may prove that the denouement of capitalism is neither a neo-feudalism nor a class revolution. The perfection of capitalism is the rise of the automated corporation, the AI corporation, a new and savage ecology of robo traders, consenting to downsize the underperforming human stock. Folman rightly indicts the inhumanity of the Hollywood studios, for whom even the Holocaust is reduced to a cash cow. As Robin’s daughter suggests….”you could play victim, nazi guard, and colloborator…”.

But more than that, The Congress suggest that the studios, and modern media, are ultimately waging a war against objective reality itself. By enabling and catering to every fantasy, by making personality into a liquid, and perception into a programmable code, Folman suggests that isolation, rather than unity, shall be the final conclusion of social media technologies. 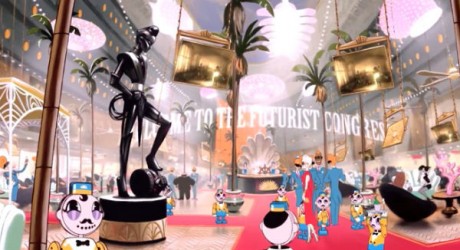 The Trap of Imagination, and the Trap of Culture:

There is an ontological crisis at the root of human consciousness. We are mimetic beings, imitators of imitators of the imitations of millenia.  There are variables of genetics and linguistics, but ultimately, we’re all just riffs- chords carried through a brief bar of time. Whether parents or peers, we exist as adapted and internalized aggregates of perceived behaviors.

At a fundament of the psyche, an awareness of this truth sears us. This discomfort can become the oedipal complex; it can be the fire that drives Jimmy Paige to outdo Eric Clapton; or it can be the fury that makes a Mark Chapman kill John Lennon. It is the rare soul that finds the confidence in life to dispel the phantoms of his idols. Even if we can shuck the myriad other schemes of human bondage that society devises, the majority of man stays enthralled to an incessant doubt- that we are frailest shadows of a shadow.

But what if Pfizer, and Proctor & Gamble, and Bristol Myers, offered you more than a stabilization of dopamines? What if they offered the fullest solution to the misery of the human condition- the annihilation of the self. The Congress shows the denouement of a world where the chemistry of being has been reduced to a code- it is a world filled with mobs of Jesii, herds of Kennedys, metropoli of Michael Jacksons. It is a world of terrible stagnation, a hecatomb of icons, where self has been swallowed in a sea of assumed heroes and messiahs.

And it is through that insight that Lem reaches the most terrible observation of all: that in the end, imagination may form the final prison of our species. The people of The Congress have joined The Chemical Party; they have no need of children, of good clothing, for their utopia is one of aerosols and ampoules and tablets. Mankind will sooner settle on a pill that allows lucid dreams of outer space than we will sweat to launch our cities to dwell there. And so the world shall end: not in Elysium, but in a nation of the stoned. 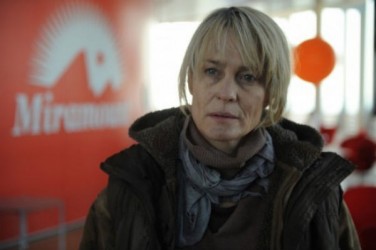 The reality beneath the virtual glamour.

I wish that I could convey the reverie that viewing this film instilled in me. Instead, I can only suggest that you seek this film. It is strange, confusing, psychedelic, and refreshingly novel. Imagine if Walt Disney had agreed to make an animated version of Gilliam’s Brazil, or if Walt had dropped acid with Phillip K. Dick, and agreed to make a movie with the man. That’s the sort of wonder that Air Folman has created. Earlier this week, I was mourning again for the loss of director Satoshi Kon. Ari Folman is proving to be that luminary’s successor, in spirit though not in style.

This is the best film I have seen in theaters this year, and definitely places within my favorite twenty films of all time. If you are in any way interested in animation, this is a masterpiece and an essential entry within that medium of cinema.