Whatever you might think of 2004’s version of John Kerry, there is no denying that in 1971, his heroic stand against the Vietnam War deserves accolades well into the next century. Some might be inclined to throw their support to an individual solely because he faced gunfire and risked life and limb during a combat situation, but that would mean I’d have to shed the same tears of appreciation for assorted Bubbas and rednecks who still mutter “love it or leave it” whenever a crisp Stars and Stripes captures their eye. The true legacy of John Kerry, therefore, is not his service alone, but how he used that experience to castigate our nation’s leaders for their illegal and immoral policies regarding Vietnam. As a participant in the slaughter, he not only had the credibility to bring home the truth, but a solemn duty to ensure that no one else suffered the horrors of an unwinnable war. As he asked, “How can you ask a man to be the last to die for a mistake?” And while Going Upriver is not going to win any converts to Kerry’s candidacy, I believe that the film, impossible as it may sound, should live on beyond the election. Certainly it will resonate more if Kerry wins the White House, but I’d like to think that even if he loses, generations to follow will cite John Kerry as an example of what is right and good about America — not that we are willing and able to shed blood for liberty, but that even when we have no desire to pick up a weapon, we can use our intellect and reason to bring about justice and decency in a nation that rarely encourages either.

Of course, Going Upriver could easily be dismissed as partisan propaganda, for we are given only a particular version of the man himself. But as those months on a swift boat defined the young Kerry (which made the man), it would be silly to argue that any other film would be relevant. Republicans would like to say that a documentary should be made on his flip-flopping Senate years, where apparently his votes nearly brought Soviet tanks to our front door, but that would be less a film than op-ed sniping writ large. Going Upriver, puffed up with Kerry’s glory as it is, also manages to appeal to our cinematic sense, as it creates genuine drama and tension as we watch the fresh-faced soldier become the mature, confident activist. Kerry’s appearances on the Dick Cavett show, for example, allow us to see a man wise beyond his years; attacking the official story, yet never wavering from his conviction that in war, it is the men — always the men — who should come first. Kerry cut through the patriotic posturing and revealed for all the world that as Vietnam pressed on, becoming bloodier by the day, any exit strategy or desire for victory had more to do with face-saving and ass-covering than any real belief in a lasting, just peace. And if thousands more had to die while men in suits re-arranged their petty differences, then who were these ruffians to argue? Kerry’s post-war mission, along with the hundreds of others committed to Vietnam Veterans Against the War, was, in many ways, the only option available to him, as he couldn’t see what additional killing would do for America’s battle against an enemy it obviously did not understand. 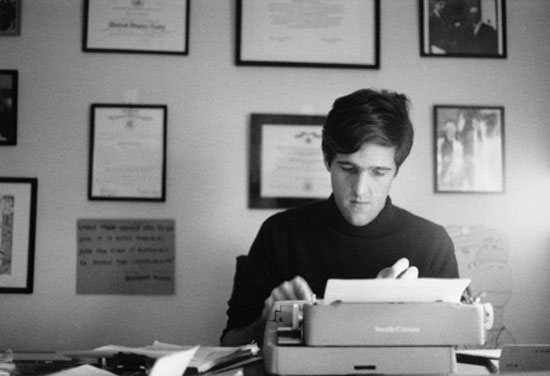 The film, thankfully, needs no re-creations, and relies instead on actual footage from Kerry’s command. Critics may argue that his tour of duty was far too brief (as if several months in Vietnam are the equivalent of spring break in Cancun), but we see first hand that Kerry faced death on an hourly basis. Swift boats were, after all, decoys meant to bring the Vietcong out of the brush and quite literally into the fire. The film also features interviews with those who served on Kerry’s boat; men who Fox News would have you believe are liars and hate-mongers, caring only about political power. And then there’s Max Cleland, who not only lost three limbs in Vietnam, but arguably the most suspicious and unjust election in American history. During the Georgia Senate race of 2002, he was labeled a traitor, a coward, a Saddam sympathizer, and a servant of terrorism, all because he questioned the sanity of cutting taxes for millionaires in a time of war. Part of me wishes that Kerry had selected Cleland as his running mate, if only because the contrast of two veterans alongside the Republican chickenhawks would have been too delicious for words. Again, I would never say that a presidential candidate must have a military record in order to run, but when such a record is present, all matters regarding the realities of war must, by necessity, be deferred to the soldier. Policy might be another matter, as it can be intellectualized, but there’s something unseemly about Bush lecturing Kerry about the “hard work” of battle, as Dubya chose to snort cocaine off an Alabama whore’s ass while Kerry was being filled with shrapnel [Ed Note: not that there is anything wrong with railing line’s off a whore’s ass. Alabama whores are another story].

Still, we are left with John Kerry the spokesman. Articulate, passionate, and defiant, Kerry’s stance against the war (and subsequent tossing away of medals) is emotionally powerful not because I want Bush to run screaming back to his hellish ranch (although I do), but because Kerry, more than most who don’t even have a cursory understanding of their rights and obligations, demonstrated what it really means to be a citizen of this country. He chose a dangerous and unpopular position (and risked any future political career in the process) and fought the fight to its bitter end. He spoke for many of his fellow combat veterans who knew that they had been screwed, but might have lacked the strength to do anything about it. Rather than attempt to justify atrocities or rationalize a lost cause as a “noble failure,” he looked at his complicity and admitted guilt. Many ex-soldiers live with their pain by overcompensating; beating the war drum with a force that might itself drown out the demons. They wave their flags with a more deliberate motion, perhaps knowing that to remain still might invite troubling questions and paralyzing self-doubt. But In John Kerry’s case, here was a man who had the sheer will to change; to not only explore, analyze, and discuss, but also fight the temptation to see the world without contradictions. He came to believe that men could be heroes and killers; brave and foolish; dutiful and manipulated. He woke up before settling into an angry patriotism, and in the process, helped change America and the world at large. President or not, for that he has my support.