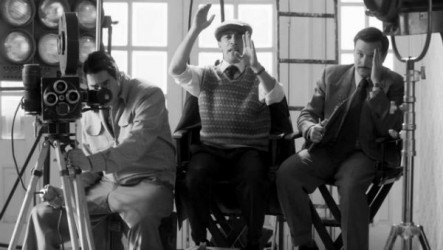 Film-making requires dedication and obsession, which is why some terrible directors manage to be prolific movie makers despite all ridicule and failure. Sebastien de Amo’s premiere film is a biopic of Juan Orol, ‘el Rey dos ‘B’s, a man generally considered the worst director in the history of Mexican cinema. Considering such anti-masterpieces as Alucarda and the  Blue Demon series, that title is hard won. Juan Orol made 57 films, most famously Gangsters Contras Cherros– Gangsters v. Cowboys. Between his wooden characters, love of bathos, and his ability to make good box office gross, Orol was an ‘unintentional surrealist’, a Mexican analogue of Roger Corman.


The film depicts Orol’s rise from failed athlete to schlock auteur. His career in film begins with the secret police- as a federal agent in the early days of the PRI government, Orol is given the tasks of filming executions, and discovers a love and fascination for photography. Through utter unflappable confidence, he gets a script to make his first film. Naturally, he takes the starring role as the gangster. But the real star is always the woman, usually in scanty dress, dancing the cha-cha. Orol (played by Roberto Sosa) is a relentless abuser of the casting couch, through which he goes through six marriages, including some to the most famous actresses of Mixcan cinema. When one divorces him, Juan returns to Cuba to discover his next Rhumba Queen.

Orol’s career is simultaneous with the rise of William Jennings (Roger Cudney), the magnate who monopolized the Mexican film industry. At first, they work together; but as Orol continues as the last independent film-maker in Mexico City, Don William sets out to mortgage, enslave, and destroy Orol. But Orol’s vision can not be stopped. Even as he withers into a Stan Lee-like scarecrow, Orol presses on with psychedelic extravaganzas. 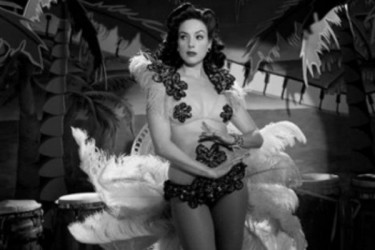 Not Just A Cheap Knockoff of Ed Wood.

What really gives the film both a magic and a comedy is that the film takes place largely within the delusional perspective of Juan Orol. He is coaxed through the setbacks of his life by a Tyler Durden-esque alter ego, Johnny Carmenta. This zoot-suited eidolon is always there to offer advice, and to take over when more ruthlessness is required. Much of the humor of the film lays in how Orol’s confidence renders him impervious to criticism- every film he is making is a masterpiece of noir, even when the machine guns don’t break glass (because smashing glass windows would be expensive). While it resembles the campy noir style of Burton’s Ed Wood, El Fantastic Mundo de Juan Orol spends little time on the process of film-making, and much more time on how Orol’s enthusiasm draws people into working for him.

The film is also a stylish review of the evolution of film. Orrol’s youth is in shaky and grainy silent format, and the advance of the years is subtly indicated by the changing graininess of the film, before transitioning to technicolor in a fantastic sequence. Cinematographer Carlos Hidalgo conveys the elegance and beauty of 1940s Mexico and Cuba. Each of the women in Orrol’s life is introduced with a glamorous musical sequence. While Juan Orol may not have left much of an artistic legacy, he had a happy, rich life. Perhaps it is the William MacGonigalls, the Juan Orols, and the Ed Woods that are the blessed ones, rather than the tormented talents.