What is this life if, full of care,

We have no time to stand and stare?

In 1911, W.H. Davies feared a lack of time to stand and stare. Thats because in 1911 people still worked. There were few opportunities for lazy reflection. Seventy years later, roots rocker Tom Petty expressed a similar fear when he penned the lyric THE WAAAAA-AIIIIII-AAAAI-TIIIING IS THE HAAAAAARDEST PART. And now, in 2013, with our antidepressants and our robots and our glowing screens, we have nothing better to do than stand and stare. Stand. And. Stare.

We Millennials are criticized by Generation X for being lazy and entitled. Generation X: the same generation that brought us Slacker and that Ben Stiller movie with Winona Ryder. Its a fair criticism  assuming, of course, that the hypocrisy of a critic cant invalidate their criticism. They were terminally bored by the picket-fence-and-mistress model of success. But the Generation Y life is defined by waiting: sitting in bed with a laptop or some other glowing screen, reading trivia and waiting for our lives to start. You wonder what came first: Millennials not caring if what they post online effects getting a good job, or there being no good jobs so Millennials dont care what goes online. From here, even the picket fences and mistresses sound okay. But thats all gone. We just stand and stare as the void approaches.

Millennials, Generation Y, the irreversibly doomed and damned, whatever you feel like calling us  were defined by ennui. Luke Epplins Atlantic piece, You Can Do Anything: Must Every Kids Movie Reinforce the Cult of Self-Esteem?, complained that kids movies create a false ideal for children. That theyre given an ill-advised commitment to believing in themselves when no one else does. Dare to dream. There is always a place for dreamers.

Epplin wrote about the cult of self-esteem: the idea that everybody is innately talented and should pursue big  no, impossible  dreams. This is nonsense, of course. Not everybody should dream big. Most of us shouldnt dream at all. Believe me. I grew up as an only child in East Bakersfield, surrounded by dust devils, Merle Haggard records, and ennui on ennui. Ill do Epplin one better: dreaming is over in America. And not just for little kids. And if one sets to dreaming big in rural America, one will rapidly find oneself embalmed in Wild Turkey and Camel Straights.

Dreaming has always been a liability to me. I cant conceive of a universe where thats a useful skill to have. Kids movies need to change. Theyve sent us into adulthood with misguided idealism and outsized career goals. The Millennial ennui hits harder when you expect miracles. It turns us into bad Bruce Springsteen characters  not the kind on Born to Run, but the kind on Human Touch. Hollywood needs to close down its dream factory to the upcoming labor force and start lowering expectations, to blunt the lonely misery waiting just a little down the road. Social mobility, career, healthy personal relationships: thats the stuff of folklore now. Its dated.

So lets do a little thought experiment: I wrote what is known as a spec screenplay, a Hollywood euphemism meaning overreaching fan-fiction, for a new Toy Story sequel. It abided the rules of the Pixar universe and better reflected the Millennial experience. Since Toy Story grows with its audience and the last one was for college students, then Toy Story 4 caters to 25 year olds who are probably bombing adulthood. We have here a movie without dreaming  a movie that doesnt pretend self-actualization is a viable Millennial goal (because it isnt).

The first step to a Toy Story that reflects the zeitgeist is normalized expectations. So Andy, who left for college in Toy Story 3, naturally couldnt afford to finish his education. He couldnt get backing on enough loans senior year, and now hes back home with a Zoloft prescription and a vague sense that a grown man needs to work for a living. We dont treat his failure dramatically, but instead as the cold reality that it is. Failure is normal for us, and so Andy is normal.

He comes home to a disappointed and increasingly distant mother, and a sister, the baby Molly from the first film, leaving for college herself  and with all the idealism and hope Andy has all but lost. Hes go a chip on his shoulder now: he knows the American college experience is generally a shell game testing only perseverance, an investment that almost always leaves one maladapted to everything that comes after it. But he doesnt tell his sister this out of affection.

So Andy retreats to his old room in his mothers house, burned out and nostalgic. Nostalgia, especially the sickly sentimental kind, is a major component of the Millennial disease, by the way. Missing the good times, and missing them even more with the aid of bottom shelf rotgut booze, Andy, alone in a quiet room, doesnt feel at home anymore. So he pours some coffee, gets within striking distance of sober, and reclaims his old toys from the little girl he gave them to in Toy Story 3. (He gave her brand new toys in return for his old ones, if that makes you feel better about Andys behavior in this hypothetical). Andys toys are a symbol of normalcy and a happy past. And normalcy, more than the coping drugs he will no longer be able to afford once hes off his moms insurance, is what he desires.

And with this he puts his toys back on the shelf. He has no intent to play with them, of course. He just wants to stand and stare, and he usually does that while getting rocked on the Old Crow he stores in his repurposed high school backpack. He sits in his bed and he uses his laptop, sometimes looking for jobs but mostly drifting into solipsism and loneliness (assuming those are different things). If there was ever one iconic symbol of the Normal Millennial, I should mention, its an adult-in-name-only lying down in a twin bed, halfway to drunk, looking at recycled image macros out of sheer listlessness.

The toys  all the characters we grew up loving  are now as depressed as Andy. Theyre watching him settle into unemployment and sporadic drunkenness. They rarely have the opportunity to come alive. The boy sits in his room for days on end, with occasional interruptions to walk around the block and smoke. Hes in bed now, drunkenly skimming job postings. Sometimes he switches tabs to post gaming hashtag jokes on twitter. Just to feel like part of something. 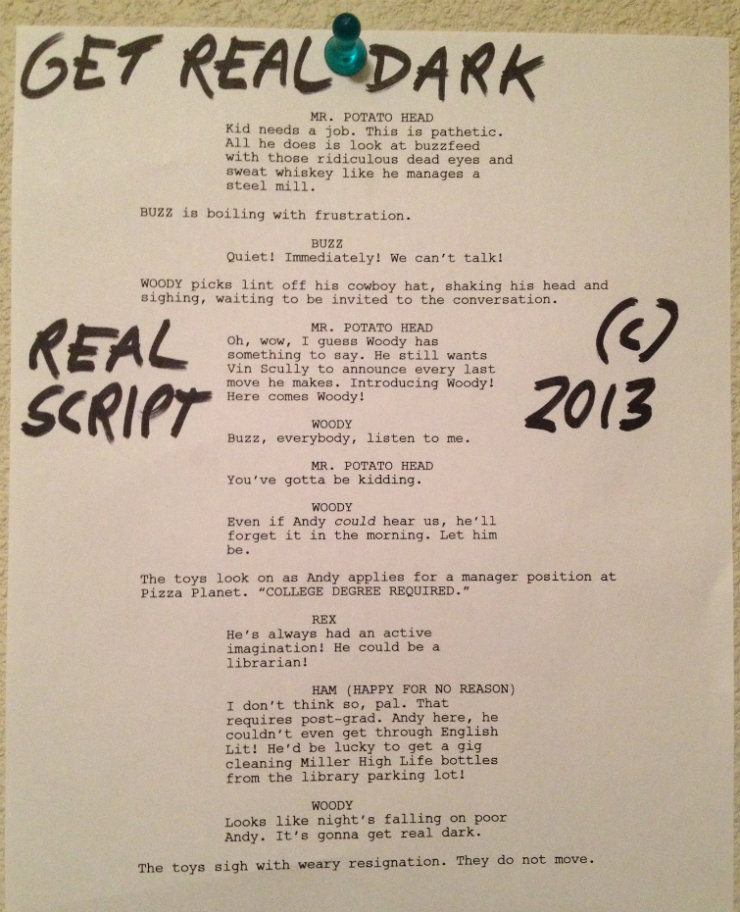 One day, Andy gets up and pounds a shot of Old Crow. He coughs a few times and puts a pack of Marlboro Reds in his shirt pocket. He grabs a novelty lighter from under his bed  its shaped like WALL-E (this is a screengrab easter egg for all you Pixar fans out there). We then follow him around the block as a jazzy, minimalist piano piece plays. He fumbles with his cigarette and wistfully looks at his WALL-E lighter. Sid is crossing the street, clutching an energy drink, and coming to say hi. They can no longer afford to be enemies.

While Andy is gone, the toys reluctantly come to life.

The toys spring into action. The band is back together! Woody proposes a modest, attainable goal: drag Andys bottle of booze to the bathroom and dump it out. Woody, Slinky, and the bucket of army guys will carry out the plan. Buzz, of course, is on lookout detail. Andy gets home from his walk, staggers to the bed, and the toys hit the road. Its rough going for the toys these days  their plastic is brittle with age and everyone knows not to pull on Woodys string.

They make it to the bathroom and empty out the bottle, but they drop it on the edge of the sink, whereupon it breaks into several pieces. The toys consider it a partial victory and scram to their designated bookshelf. Except for Woody. Hes too slow to react and must fall asleep next to the broken bottle when he mistakenly thinks he hears Andys footsteps.

The next morning, a groggy Andy finds Woody and the whiskey bottle by the toilet. Smiling at the juxtaposition of his childhood toy lying next to the great destroyer, Andy chalks the accident up to a drunken spiritual awakening, and decides hes finished with booze. For good this time. As he retreats to his bedroom, hungover but with a new lease on life, we hear his mom yelling from downstairs. I know what youre doing in the bathroom. Youve got zero chances left. Andy knows this yet keeps smiling, and he goes to the bedroom once again and shuts the door.

The toys smile because hes smiling. Andy combs his hair and puts on a button-up shirt. Everyone looks on, happy that, despite his failures, he hasnt given up. Andy walks with purpose to his window, and he pushes it all the way up. He leans out and lights the mornings first cigarette, with Woody by his side. But Andy realizes only one of his problems has been solved, and his smile fades away as he observes the colorless streets, coated as they are by the muted light of winter.

Andy stares with righteous intent as wisps of smoke creep above his face and ashes fall. Woody stares too, and puts his arm on Andy. The camera studies Andys face, then slowly leaves the window and ascends to the sky. A Randy Newman song plays. Andy stands and stares.

We found Kaleb on Twitter, listened to his podcast, The Last Exit Show and were smitten.
Follow Kaleb @kalebhorton