Written by Edward Neumeier from the book by Robert A. Heinlein

Starship Troopers has a lot in common with the song that was in all of its commercials: that Blur song that goes woo-hoo! and that they still play at hockey games sometimes. On the one hand you can enjoy both as superb, visceral entertainment. Rad guitar riff, exploding bugs and cool guns–woo-hoo indeed! But in both cases, you have to figure that author is aware of the low brow surface of his work.

In the case of the film, the lowbrow tone is perfect. It depicts a future under the reign of fascism, a crushingly dumb ideology. A lot of liberals panned the film for being pro-fascist. I think that the primary motivation of so-called political correctness, like other forms of prudishness, is denial. Sexual prudishness seeks to deny those horrid things between our legs. P.C. seeks to deny those nasty things rattling around in our brains and culture.

So its natural that a certain stripe of liberal would be offended by this film and need to find a facile way to condemn it. To these folks, a depiction of fascism should always be accompanied by Darth Vaders theme and photographs of dead babies. The reality is that fascism has some appeal and that a fascist state is not necessarily a complete nightmare. Thats why it catches on now and then. Thats also part of the reason that American society is much closer to fascism than most people care to think. This film was made during the Gulf War, when Americans were whipped into a militaristic, at least somewhat racist frenzy–with the help of our free press, who didnt really seem to mind that they werent allowed to actually do any journalism on the war. The P.C. critic, and member of the very same media, is able too hide all of these disturbing thoughts from himself by simply labeling the film pro-fascist. In reality, by portraying fascism in an appealing way (succumb, be dumb, have fun) that can easily sweep the viewer in, the film helps us to understand it and see it in our own culture as well as others. At the same time, there is a persistent satirical edge to remind us just how stupid the goings on of the film are.

There are some logical holes in Starship Troopers. What do the giant bugs eat on their baron planet? Why do the troopers use weapons that are so ineffective against the bugs? How does political equality for women make them better at throwing footballs? Im willing to pretty much overlook these holes. None of them are especially gratuitous or interrupt the flow of the film.

The commentary has a lot to recommend it. The usual position of creative artists and especially film directors is one of just watch the movie. They dont want to talk about themes, messages or criticisms. Verhoeven begins the commentary by attacking a review in Time. Soon, writer, Neumeier chips in that one of the themes of the film is that war can turn us all into fascists. Thats another thing I like to see. Both of the primary creative forces, the director and the often overlooked writer are heard from.

Aside from an excellent analysis/explanation of the film itself, the commentary includes discussions of American foreign policy, sex and even Noam Chomsky. Its a lot more interesting than, it was very cold when we shot this scene.

Also, I inadvertently learned a trick while watching the commentary. Turn on the English subtitles so you can know whats being said in the film and listen to the commentary simultaneously. Maybe Im the last person on the planet to figure that out, but I pass it on just in case someone out there is even dumber than me is.

I wish Robert Heinlein had founded his own religion instead of L. Ron. Imagine how cool that would be. I guess you could count Iron Maiden as a religion, but most people only convert to it when they are fourteen years old and ravaged by puberty, only to convert back to whatever they were before after five years. Heinlein tells great stories that appeal to pretty much the same demographic. Although to be a Heinlein fan, you don’t need a Judas Priest patch ironed on your lined denim jacket. Not that it would hurt, it just isn’t necessary. Once in a while, you’ll run into an older fan of Heinlein’s. In this instance, that fan is Paul Verhoeven. The story is Starship Troopers. It’s taken me a while to come to grips with how much I love this film. I used to always describe it just as Beverly Hills 90210 meets Braveheart, but that isn’t doing Starship Troopers justice.

The story is that at some point in the future, a fascist “Federation” has taken over the world and things are seemingly better. Racism, sexism and poverty have all been wiped out. Plus, everybody gets massive lip and chin implants. All except for one unfortunate red headed kid who looks like Gary Busey. [Ed Note: That’s Gary Busey’s kid, Jake Busey] In this brave new world you are either a civilian (phooey!) or a citizen (Hurrah!) I believe it was Heinlein’s attempt to poke fun at Soviet style communism. Party member, decadent bourgeois pig, etc. Space exploration has uncovered a race of super-cruel and homicidal insects that keep launching asteroids with their butt’s [Ed Note: Yeah, that is actually how it happens] straight at earth. If people are ever close enough, then they kill the people, too. Earth mobilizes and decides to wipe out these “arachnids”. Enter Johnny Rico and Carmen Ibanez, played by Casper Van Dien and Denise Richards, respectively. 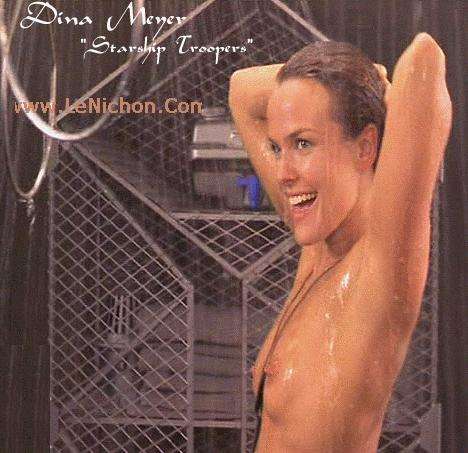 Johnny and Carmen are high school sweethearts. He is the captain of the football team and she has really big boobs. Oh, she is good at math, too. Which is why she joins the military as a pilot. Johnny is only good at football, so he has to join Mobile Infantry, which is similar to our own Marine Corps, except that boys and girls get to shower together. Dizzy Flores, played by cute redhead Dina Meyer, (Who sucked it up in Dragon Heart) is also in love with Johnny. So much so that she gets transferred to his squad at boot camp. We also meet Carl, played oddly by Neil Doogie Howser Patrick 5’6″ on a good day Harris. Neil is psychic and mean and he joins military intelligence, which Verhoeven smartly shows us is actually the Gestapo. Very clever.

Johnny and Carmen get to watch and participate in battle after countless bloody battle as most of their friends, lovers and comrades die. Dizzy dies, but Johnny isn’t that broken up about it because not only does he have inflate-a-lips Carmen back, but he has lost his innocence and become a man, a solider, a citizen. This movie would have been nineteen times more appreciated if a timeline could have been established. If I remember correctly from the book, years have gone by when Carmen and Johnny are finally reunited. In the movie, Johnny is still on the same haircut by the time he gets hot lips, er Carmen, back. I am not saying that the passage of time wasn’t implied, but if it was, I missed it. Since it seems like only three weeks have gone by, first time viewers feel as if they are watching a cartoon. Which is unfortunate, because Starship Troopers is so much more.

See, Verhoeven intended Starship Troopers to be a satire. He is making fun of war, military culture, reactionaries, extremists, and the like. He says so right in the commentary. The problem is though, that his accent is so thick that while you are listening to the commentary, you really have to pay attention to understand exactly what he is saying. That is the trouble with Starship Troopers. Van Dien and Richards are hopelessy vapid individuals who wouldn’t know satire if I showed up at their house wearing fake lips and a fake chin. They have no idea what they are doing. Which makes the satire all the more buried, but all the more sweet. Throughout the movie there is this running interactive news program that moves the plot along. After one point after their home town of Buenos Aries is destroyed, a reporter begins to suggest that maybe humans and bugs could manage to live with each other in the same galaxy. Johnny Rico, now Lieutenant Rico, overhears and tells the reporter that he is going to, “Kill them all.” I bet you five dollars that in Van Diem’s mind, he felt that the character was definitely doing the right thing.

Two actors who I feel did know that a send up of reactionary military culture was being made, were Michael Ironsides and Clancy Brown. Ironsides played Lieutenant Rasczak, a one armed tougher than leather son-of-a-bitch that commands the Roughnecks. Or, Rasczak’s Roughnecks, as one hopelessly annoying character annoyingly points out. In a strange twist of fate, not only is Rasczak their commanding officer, but he was also their high school civics teacher. He is the one that inspired Johnny and Dizzy to become Citizens, i.e. join Mobile infantry. Ironsides plays the guy as an over the top right wing maniac with some redeeming wisdom. At one point he berates his troops with, “Do you want to live forever?” as they are being slaughtered. At another, he advises Rico to, “Never let a good thing get away.” This was in reference to Dizzy, who Johnny wound up screwing later on that evening. And showing that he is really a fascist with a heart of gold, Rasczk gives Johnny and Dizzy an extra tens minutes to fuck before they have to ship out.

Clancy Brown does a good job as Drill Instructor Zim. He is an extra cruel bastard who breaks a recruit’s arm in a show of force on the first day of boot camp! He also throws a knife threw the Busey looking guy’s hand just to prove a point. However, when he is going to whip Johnny Rico, he tells Johnny to bite on a piece of wood like Zim had to do at one point. We learn that he is just toughening these recruits up for their own good.

Is Starship Troopers as thought provoking as it could have been? No. The principle actors were too crappy to effectively get any kind of a message across, unless you are the kind of person who looks for hidden meanings in movies. Although, dressing Doogie Howser up like a Nazi is a metaphor that anybody can understand. Now, was Starship Troopers entertaining? Fuck yeah. Double fuck yeah, in fact. Even though Verhoeven blatantly ripped off a half dozen scenes from Star Wars to get the job done, you won’t care because you’ll still be thinking about the co-ed shower scene. I know I am.

The commentary is pretty good, although Verhoeven talks incessantly the entire time and they dropped the sound out of the movie completely. So basically all you hear is a screaming Dutch man for 1 hour and forty-eight minutes. Of the five deleted scenes, four involved Denise Richards kissing someone and the fifth had her in her bra Draw your own conclusions.