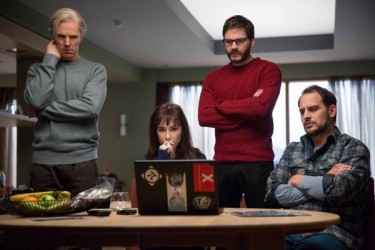 Get ready for TWO WHOLE HOURS of people STARING AT MONITORS WHILE FROWNING! YEAH!

128 minutes long, R for…. insufficient bribery of the MPAA, I suppose (no nudity or violence)

Fair Value of The Fifth Estate: -$3.00. I could begrudge this film on a flight. If you need a film to explain the Wikileaks saga to Grand Aunt Connie, who still believes that computers are run by magic elves, then this glossy and heavy handed piece will suffice. But it’s less of a story and more a slow burn Two Minutes (or Two Hours) Hate of America’s latest Emmanuel Goldstein of the week.

Transparency Only Reminds Us How Transparently Shitty This World Is.

I was once a part of the chairborne brigade that believed that the Collateral Murder story was going to lead to a new Church committee, and significant reforms of America’s intelligence and military communities. I also believed that Occupy would revitalize the Left, that Barack Obama was going to reform American government, and that finishing my law degree was an intelligent career path. I should start a consulting business where I make stock recommendations and then people can buy the opposite of my suggestions.

But change doesn’t come if people don’t care, and people don’t care until their food and gasoline supplies are threatened. From the weary hindsight of 2013, the Wikileaks stories seem like much ado about nothing; of course government is corrupt. The mistake of Assange and Snowden is in assuming that they are engaged in reform, as surely as the protestor on the street thinks that leaders are taking notice of their clamor. The internet has actually become a powerful tool of diffusing discontent, in the mask of enabling it- if everybody is free to fume to their little echo chamber about the perfidy of The Other Team, be it DailyKos or Free Republic, everybody feels safe and active without contributing any labor beyond the regurgitation of pre-existing content.

The Fifth Estate is Hollywood’s attempt to winnow a diverse multinational coalition of web activists into a rock band narrative of idealism undone by ego. Julian Assange (Benedict Cumberbatch) is the frontman, all speeches and skirt chasing. Daniel Berg (Daniel Bruhl) is the hard charging bassist who gets to say “You’ve changed, man. You’ve changed.“. 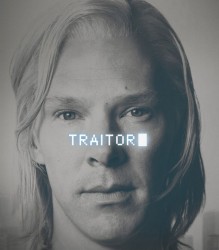 What Are the Three Great Sins of The Fifth Estate?

Just for all of those not familiar with political legislative structures of pre-revolutionary France, we get a big speech about how bloggers constitute a new and organized power structure. Don’t worry, little redditor- you’re now equal to the nobles, clergy, peasants, and journalists! Don’t let that power go to your head! Remember, with great web traffic comes great responsibility!

Running a large multi-server website involves globe-trotting from grimy Berlin tenements to glamorous Reykjavik nightclubs while surrounded at all times by an assortment of pierced and dyed punks and misfits. Instead of gold records, you talk about hourly traffic on your site. You still get groupies and eager fanboys, but instead of arguing about creative integrity, you’re arguing about journalistic integrity.

(3) The Internet is a Giant Cubicle Farm

I understand that it’s hard to communicate scenes that took place entirely online. Clacking keys and scrolling text lack the dramatic heft of dialogue. But really, munging somebody’s html scripts is not overturning a bunch of desks. I liked the ‘infinite armory’ scene in The Matrix as well as the next man-child. But use a different metaphor. As a character says in the film, “You’re using pretty impressive visual graphics, for the 1980s.”.

The internet is not a series of tubes, actually, it’s an infinite series of desks.

So How Bene is the Dict of Cumberbatch?

I can’t speak to the real Julian Assange, the most important Australian in the history of journalism to ever allegedly rape a Swedish prostitute. As depicted by Cumberbatch, he’s a semi-functional alpha type who reacts poorly to stress or subordinates behaving as peers- a good person to have keeping a startup together, but very poor company. There’s the implication that the weirder parts of his backstory – raised in a cult, ratted out by early hacker friends- that justify his one-man band attitude, at least until he cracks under the pressure of surveillance. Cumberbatch may be trying to portray a socially dysfunctional visionary, but his performance never conveys the sense of a full human being. It’s awkwardness and ego, gilded with charm, but never with a clear psychological foundation.

Buy the Wikileaks Web App at the iTunes Store!

The cinematography of this film resembles one of those ever-vague ads for the latest inscrutably named web-service. Dialogue is projected from screens on the walls behind the characters. Communications fly out from the computer and into the aether of the great glowing satellite network. Green colored text indicates a smoothly running system, while red text indicates system failure.  When the characters began enthusiastically talking about the clever anonymity systems of Wikileaks, or other operations aspects, I almost expected the next shot to be a montage of diverse smiling beautiful people whose lives are being made easier by using Wikileaks on their iPad. I’d consider this film to ultimately be ephemera, a trifle over a tabloid trifle that was always more flash than thunder, as instantly obsolescent as Hackers or The Net, albeit with less of the hilarity of those auto-anachronisms. Someday, people who actually understand computers will make films about people who actually understand computers. But that’s not today.

At the end, the film suggests that you should seek out this story for yourself, as this account cannot be relied upon. Even the film agrees with my opinion- skip this movie!