Jonny did not go down swinging…

Too much Man, not enough Spider. That’s how I saw Spider-Man II at any rate. This movie’s been lingering in my mind ever since I saw the first Spider-Man, which I loved so much. And not that I am totally disappointed–the new one definitely had its moments–but I walked out of the second installment of the cash cow series much less enthused than when I walked out of the original (and superior) movie. I guess I had really high hopes that Raimi would do what he did with Evil Dead II; make it an order of magnitude better than the first, but still good, film. Again, and I need to stress this, parts of part 2 are out of control fucking amazing. Like, honestly, better action than even The Two Towers offered up. That said, parts of Spidey II dragged ass around the dog track. Maybe parts of the first one dragged, too, but the movie was shorter overall so they weren’t as noticeable. Regardless, while parts of the movie cook, other parts are stuck in a Taco Bell drive-thru circa 3:00 am. I’m going to break it down into the three sections, or segments, that I feel best describe the hodgepodge that is Spider-Man II. These segments are non-linear, dude.

Dude, the first half of this movie is funny!. Like laugh out loud, good solid humor. And I’m thinking to myself, “All right Sam (Raimi)! Way to do it up!” First, and funniest, is the brilliant re-casting of Bruce Campbell, this time around as a cruel theater usher. If y’all remember from the first Spider-Man, Bruce played the ring announcer who coined the name “Spider-Man.” In this one, he is just straight up great, though why a director would have a talent like that in a film for all of 90 seconds is beyond me. Like, why not make him Doc Oc? I digress. Another really great blast from Raimi’s (and Campbell’s) past was this hospital scene where a team of surgeons is attempting to remove the tentacles from Doc Oc’s (Molina) back with power tools. In an overly long sequence that was surely lost on anyone who has hasn’t seen any of the Evil Deads, one of the doctors attempts to defend himself with a chainsaw. Way to pay homage to yourself, Sam. My friend and I were in stitches. 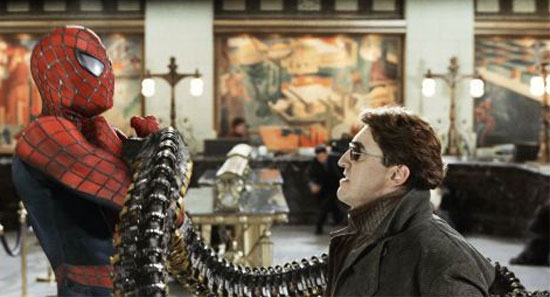 Also, this time out, they really play up the fact that Peter Parker (McGuire) is a chump. He’s constantly getting humiliated, fired from jobs, nearly flunking out of school, being a pussy when it comes to MJ–everything he does save for roam the streets at night catching bad guys is pathetic. And funny. There is a great sequence where Jameson has Parker taking photos at some fancy event and no matter how hard he tries (and at this point Peter is trying hard) he just cannot get a single hors d’oeuvre or drink. It is funnier if you see it than read about, obviously, like all good physical comedy. Even his landlord, a stereotyped rude but funny ethnic character who I would normally want killed had his moments. Especially when he was belittling and humiliating Parker. Apparently, nobody plays a pathetic sad-sap quite like Toby McGuire. There’s even a little music montage once Parker gives up being Spider-Man that is just for laughs and pretty damn funny. It looks like a Mentos commercial. And yes, once again, J.K. Simmons hams his way to high heaven as the greedy, cheapskate blowhard Jameson. Especially the part where Parker asks for a cash advance. Sure, Jameson’s reaction is lifted directly from the scene in The Big Lebowski where The Dude asks the cop if he has any “leads.” But so what. All art is thievery; what matters is how you use the stolen goods.

OK, if the entire movie had been fight scenes between Spidey and Doc Oc then I could easily say that Spider-Man II is THE RADDEST MOVIE EVER. However, that title still belongs to Commando–as it always will–as maybe only a quarter of Spider-Man II is fighting. But dude, seriously, the action is intense. Anytime I got all pissed off about how stupid something on screen was, my face quickly was contorted back to a big dumb grin as Spidey and Doc Ock duked it out all over Manhattan. At one point when Spider-Man was swinging all over the city, I caught myself moving my head up and down as if I was on a roller coaster. The shit was that rad! Special shout out to the kids at Imageworks who did Doc Oc. He was just amazing. 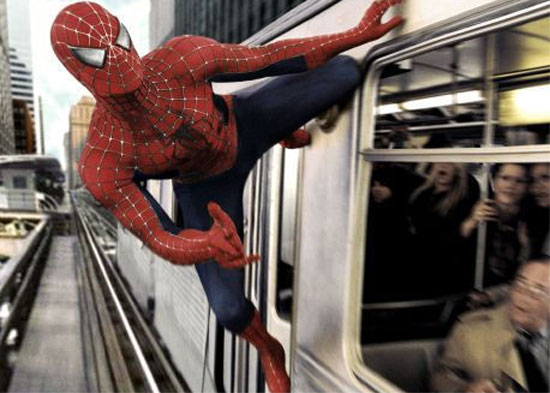 Molina did a fine job (once he was Doc Oc. When he was just Doctor Octavious he pretty much sucked.) trashing the city and endangering the lives of others. In one particularly excellent scene, Raimi rehashes a (pretentious) part from the first film. Remember at the end of the first Spider-Man when Goblin has MJ on the bridge and if kicking Spidey’s ass but then suddenly all the gathered New Yorkers turn on him (Goblin) and yell, “If you want him you got to go through all of us,” a disgusting scene triple infused with the fake populism you can only find in summer blockbusters/political conventions. Anyhow, Doc Oc has just beat the snot out of Spider-Man and is trying to collect the body to take back to Goblin’s kid. The subway suddenly stands up to Doc Oc and they rehash the old and still trite, “If you want him you’ll have to go through us.” Luckily for us, Doc Oc, with obvious delight in his eyes, says something like “No problem,” before inflicting serious bodily harm on at least a dozen innocent bystanders. Loved it!

Dude…I guess what sucks the most is that in light of the first half of the movie, the whole film could have been fucking great. But, in what I can only imagine was an attempt by the studio to get the most return possible on their investment, Spider-Man 2 winds up being all preachy and shit. I hate that. Seriously, there is probably like a twenty-minute part where Parker is listening to Aunt May (a character who so needs to die) go on and on and on and on and on and on and on and on and on and on and on about what it means to really be a hero. I half expected her to either wink or say, “Go get ’em, Spidey,” as once again, Peter Parker decided to be Spider-Man. However, the scene I just described was so long-winded and dull that I just could never fully get back into the movie after it. And really, there was way too much Aunt May. Honestly, she was in the film more than Doc Oc. I know that’s why I go to action films; to see geriatric septuagenarians keeping a stiff upper lip in the face “those damn bankers.”

Also idiotic to the point of garnering my contempt was the weak-ass “science” that the movie employed. OK, first off, Dr. Octavius (like all movie bad guys these days) is after fusion. Except that we’ve already got fusion. It is called a hydrogen bomb. So, any “scientist,” when discussing their work in this particular field would use phrases similar to “controlled fusion reaction.” Think I’m nitpicking? How about the fact that Dr. Octavius is demonstrating the fusion reaction openly. And I don’t mean he is inviting people down to look at his work, I mean he is standing there, in a room with fifty other people just feet away from a thermonuclear reaction… I mean, calling that bit of plotting dumb, isn’t really fair to the word “dumb.” OK kids, science time. The surface of the sun is 10,000 Fahrenheit. However, the corona that is just above the surface of the sun is over a million degrees Fahrenheit. Obviously the “little sun” that Dr. Octavius creates is several dozen orders of magnitude smaller than our sun, but the idea that someone with his shirt off could stand in the same room with an un-shielded atomic reaction is laughable. Of course he’s containing the solar flares with those great big claws of his, which are not only grafted to his spine using “nano-wires,” but the Doc’s arms are artificially intelligent. Excuse me but “fusion” “nanotechnology” “artificial intelligence,” aren’t those just big words that dumb screenwriters use to sound smart? Of course, at the end of the movie Doc Oc builds and even bigger fusion reactor, and this one gets like three inches away from Mary Jane, and she doesn’t get burned. Also, and maybe this is just me, but don’t sun-type objects create gravitational fields, not magnetic ones? Maybe I’m showing my age, but that “science” stuff was so stupid that I couldn’t be tricked into caring. Though, the fact that Mary Jane was engaged to an astronaut was pretty funny. “I feel like I’m back on the moon.” Get it? 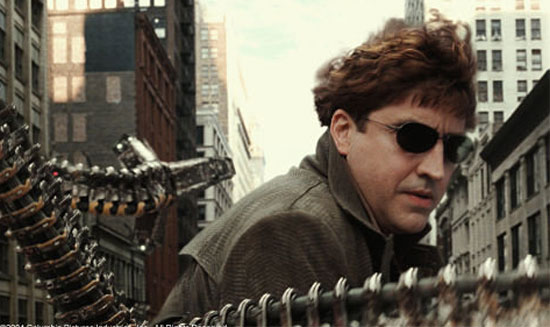 Finally, the forced, fake innocence of the whole story finally wore me down. I give up, I can’t buy into the love story; it’s all bullshit. Look, you can have a high school crush or whatever on someone, but if all you have ever done is kiss them… it just doesn’t reflect reality in any way that I am familiar with. There was this scene where (just like in the first film) Mary Jane and Peter are in their respective backyards talking over a little fence. The scene should have gone like this;

Mary Jane: Peter, is there anything you want to say to me?
Peter: Uh, well MJ, it’s a little hard for me to say anything right now cause my rock hard spider cock is stuck in the chain-link, but, can we just pretend your name is “BJ” for a minute?

But instead we get treated to a love story that plays out as smooth a junior high courtship. Motherfucking clunky is what I’m saying. And then in the middle of the whole film is this totally inexplicable part where Peter is bemoaning the fact that he never gets anything he wants and all of a sudden his ridiculously cute (and a foot taller) neighbor walks into his room and asks him–are you ready?–if he wants some chocolate cake and milk! And he says yes and they eat chocolate cake and milk!!! So totally Bollywood I can’t even see straight. If the cake and milk scene had maybe been played up a tad more for laughs, I could have swallowed it. As it stands, I will never believe that two twenty-year-olds who are obviously attracted to each other will simply sit silently in a room and eat cake. I guess Ashcroft was one of the script doctors. Beyond that, the ending sucked, Harry Osborne, the son of the Green Goblin, sucked and unlike the first Spider-Man, where I walked out of the theater trying to shoot webbing from my wrists for the next half-hour, I walked out of part 2 happy that the screening I went to was catered. And that sucked. The lack of enthusiasm; the catering, with the exception of the weak-ass coffee and cheapo beer, was great. Prosciutto… (No, I am not a real critic yet. My friend works for the company that did the CG effects and he took me as his guest. No, I’m not gay. Yet.). So, dude, rent the DVD and fast-forward to the action parts.