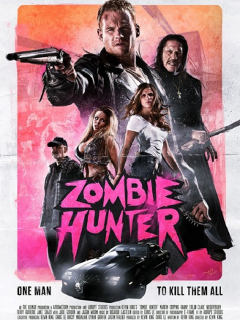 I have a question: Is the sight of Danny Trejo murdering zombies with an axe more or less awesome when shitty dubstep music plays on the soundtrack? I have been contemplating this question deeply for the last twenty minutes since watching this film, turning it over again and again in my mind, trying to analyze it from all angles, yet I find myself at a loss. Much like the classic “What is the sound of one hand clapping?”, it is an impenetrable koan impervious to all logic and reason. That there is no answer is, in fact, the answer itself.

Danny Trejo is the best of us. We are judged as men and as human beings in relation to our deviations from his ideal. Who else among us would fight a bargain basement CGI Resident Evil reject on film after cussing it out in Spanish first? For my part, I would recoil in horror at being asked to take my shirt off. Yet Danny Trejo is unafraid, and without fear or judgment hacks off the monster’s arm without even breaking a sweat. If only all men could be as assertive and self-confident. All I could do was wonder what happened to the monster’s penis. Was he spliced with bird DNA or something? It’s still bothering me.

Of course, we can’t have nice things. This is not a country that is based on giving us what we want or what we need, and so Danny Trejo is brutally decapitated halfway through the film by the aforementioned monster (spoiler). Given that he didn’t even appear until around twenty minutes into this motion picture, I find myself wondering what the thought process behind this film was. Why create a film titled Zombie Hunter and not have Danny Trejo play the titular character? What has happened to us as a people? Why can we not have nice things?

Our dreams dashed upon the rocks, we settle in to what can best be described as a Planet Terror ripoff. Seeing as the readership of Ruthless Reviews consists primarily of serious students of the cinematic arts, I’m sure that we’re all aware that Planet Terror was, itself, a tongue-in-cheek homage to countless zombie flicks over the decades. Now, we have another film in the same vein with none of the humor or creativity that made Planet Terror the genre film geek classic that it is. Even the other half of the Ruthless Reviews readership (guys who spend 80% of their time playing Starcraft II and the remaining 20% masturbating to Selena Gomez’s “Come and Get It” video on YouTube) can see this.

And no, I’m not talking about myself there. I still play Starcraft I.

So what does this movie have to offer besides a shirtless Danny Trejo? Well, not much. The fact is that, while he was not completely shirtless in Desperado (which remains one of the greatest films ever made), his bare chest was adequately exposed. So why should we watch this film again? These are the questions that should be asked by the creators before a film is made, not by the audience after it is complete. Didn’t Resident Evil: Extinction already cover the whole “zombie apocalypse in the desert” thing? Didn’t all the movies that Resident Evil: Extinction was inspired by cover this? What exactly are we adding to the table here, gentlemen?

In all fairness, a movie doesn’t have to do new things to be worthwhile, and Zombie Hunter is perfectly fine as DTV genre movie fare. I certainly enjoyed it more than Bad-Ass, or Bad-Ass!, or whatever it was called. That film was just a string of stale Internet memes strewn about a dystopian cinematic landscape. It’s been nearly a year since I saw it, but I still remember the moment when I noticed that the love interest was actually named “Amber Lamps” and almost ragequit life. Yet I prevailed. I lived so that I could review… this.

So here we go, folks. Here are the Top Ten Simultaneously Awesome and Terrible Danny Trejo-less Moments in Zombie Hunter.

10) The Hunter refers to his love interest Allison as “Sugartits”.

It’s nice to see this Mel Gibson classic still getting play on the B-movie circuit. The creators of the film even took the time to make tequila The Hunter’s favorite beverage. Tequila was, of course, what Mel Gibson had allegedly drank over half a fifth of when he coined that classic term and christened a female member of Malibu’s finest with it for all eternity. I find myself wondering, however, if this word has ever been used unironically by a sober person. It’s perhaps the most pressing question of our time, even more than viable alternative energy and how to perform Dune-style space folding. Also, since this is America, shouldn’t she be called “high fructose corn syrup tits”?

9) Every part of a zombie girl’s body has decomposed to some extent except for her cleavage.

Yes, this is a breast-centric review. Apparently, I have a breast-centric mind. Now, I’m not a moritician, but is there a biological reason why the breasts would not degrade along with the rest of the body? They look quite supple and firm. Inviting, even. I know she gets slashed in the brain by The Hunter’s knife, and so all of this is pointless to think about, but I can’t help myself. Does it still count as necrophilia if you have sex with a zombie? Should I stop typing now?

8) A purple light shines on a teenager for no apparent reason when he opens an adult magazine.

7) The old guy says “I’m getting too old for this shit” not once, but twice.

6) We never see “Fast Lane Debbie”‘s breasts, even when she takes her shirt and bra off.

It’s the new thing in DTV film: never show any bare breasts. It’s not like people are renting your shitty movie for any reason other than watching zombies get decapitated and watching D-list actresses take them out. No, we have to ignore half of the formula that has worked for genre film for decades because we’re all going to die if we see a nipple. I mean, “Fast Lane Debbie” looks like she’s 25 going on 50, and I didn’t want to see her sugarless tits, but it’s the principle of the matter. Why have her take off her bra and not have the audience see the result? It’s like the old saying about showing a gun in the first act. You have to use the gun in the third act, or it’s pointless. Just show the bare breasts, guys. It’s ok. I can handle it.

5) Substandard CGI during the finale as a monster’s fingers pierce The Hunter’s abdomen.

This is difficult to describe in text or in screenshot, and really must be seen in motion to be fully understood, but it had me laughing for a minute straight. They should have just gone the silent film route and had a title card pop up explaining the situation. I know that this is film, and one is supposed to show, not tell, but I don’t know about this one. Some things just don’t need to be seen.

4) The mutant zombie monsters have no genitals.

Yeah, I’m still on this. First Christopher Meloni doesn’t whip it out in Man of Steel and now this. Why are giant unclothed monsters hardly ever anatomically correct? I know what you’re going to say: maybe it was a girl monster? I don’t know. Shouldn’t she have a giant gaping orifice like the brain bug in Starship Troopers somewhere? The fact that I’m even bringing this up is obviously just more evidence that I have problems, but I just can’t get over the fact that things like this end up on film. Maybe it’s like a whale penis or whatever, and only pops out when erect. I think I should stop talking now.

3) The hilarious Knight Rider-esque music that plays over the credits.

This is actually completely awesome, and not terrible. Why is it on this list? I can’t even make a top ten list properly. God, I really do have problems.

2) Allison leaves her bra on during the sex scene.

Much like Scarlet Johansson’s in The Island, Allison’s breasts remain covered even during coitus. For his part, The Hunter doesn’t take his boots off either, and half of the shots in the sex scene focus on them. Who is directing these movies nowadays? The entire world has descended into apocalyptic hell, yet the breasts must remain supported at all costs. The GOP’s attack on feminism is complete. As the whole world is engulfed in flames, the bras are the last thing to burn.

1) I didn’t turn this movie off after Danny Trejo died.

May God have mercy on my soul.