Written by Alan B. McElroy

Given what we’ve seen of West Virginia natives Jessica Lynch and Abu Ghraib nitwit Lynndie England, this film might as well be a documentary. Yes, the hills are filled to the brim with inbred freaks who grunt, howl, and murder outsiders to feed their animalistic rages, and good-looking city dwellers are just the sort of people who are going to go and get themselves killed by them. Any film about West Virginia is going to bring up assorted jokes and anecdotes about loony yokels, but the first thing I think of is that Virginia, who itself is responsible for a lot of evil in the world (it nearly gave us Senator Ollie North, for one), made the wisest choice of its history by letting the hill folk secede and form their own state. In an instant back in 1863, Virginia’s poverty rate declined by 70%, and its literacy shot up to the high nineties. Virginia may have been a hotbed of treason during the Civil War, but at least they had the good sense to rid themselves of the dirtiest, nastiest, most vile creatures in the Union and give their state a fighting chance for the future.

Wrong Turn, shockingly enough, does not consider such historical questions, but instead gives us at least the 2,448th version of the “young people who get lost and die” plotline. After an opening credits sequence where two buff climbers are butchered, we meet studly doctor Chris Flynn, an impatient man who is driving through the Greenbier Backcountry of scenic West Virginny. After coming across a traffic jam on the interstate, Flynn takes a back road and, while fiddling with his CD player, slams into a group of hotties who have blown a tire. Shaking off their injuries, the group decides to seek help, leaving two friends behind to watch the cars. One’s a pothead, and the other loves to suck cock, so the Friday the 13th Rule must apply and the biggest sinners will die first. They do, and we don’t much care because the only insight into their personalities is when we hear the tart say, “Be a man and take down those pants.” 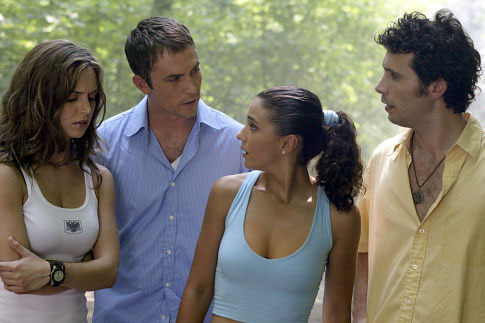 The remaining characters — Flynn, two big-chested twits, and the resident goofball — set out for a gas station or at least the main road, and instead come across an isolated cabin, which of course belongs to the murderous hillbillies we glimpsed during the opening of the film. The set differed only slightly from the one in The Texas Chainsaw Massacre, and there were the scattered body parts, bloody tabletops, and enough filth to cover several trailer parks. If one watched slasher/horror films exclusively, one would think that mason jars were invented solely to hold ears, eyeballs, jawbones, and kidneys. As the kiddies look around, they notice that the freaks are on their way home, a-hootin’ and a-hollerin’ in their Waltons-era pickup truck. They manage to get away, but are of course chased, which then leads to the brutal deaths of several more characters, all of whom are hauled back to the cabin to be chopped to pieces. 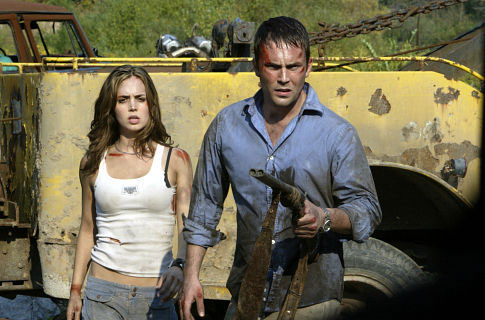 After about an hour, we finally get a good look at these hillbillies. Still, despite their deformities, retardation, battered and toothless faces, and droopy eyes (and not to forget the pounds of dirt and sweat that cover every inch of their skin and tattered overalls), they are expert marksmen, handling a crossbow and shotgun like they were born to kill. But, being simple folk, the dumbshits leave the keys in their truck as they chase the youngsters, and the beautiful people get away. In the escape attempt another character is killed, shot in the back with at least three arrows. His fiancé mourns for all of three minutes before she’s cracking jokes and planning her next move.

I could go on like this for hours, but it stands to reason that there are near escapes, a few more killings (including a sheriff, who is shot through the eye with an arrow), and a grand final scene where the doctor saves the last remaining chick by driving a truck through a window and setting the place ablaze. The two sexy stars drive off into the sunset, leaving the charred remains of what was the most heinous band of savages the country has ever seen. But wait! As a deputy inspects the shell of the former homestead, he is killed by the lone survivor, an especially nasty creep who is full of mirth, and his cackle promises a sequel, so long as this installment made a decent profit. 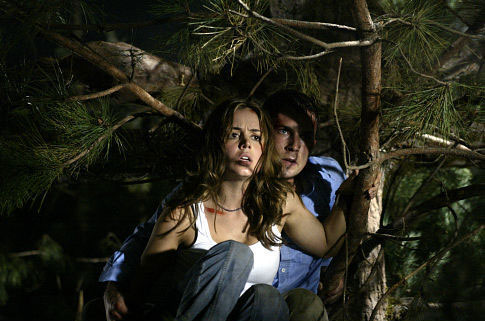 In all, clocking in at only 79 minutes, Wrong Turn is not the worst way to spend an evening, but there wasn’t an original scene to be had. And while I could spend several more paragraphs hammering the incompetent cinematic technique, I’ll come clean and admit that my main bone of contention is that I didn’t get to see any tits. Not even the mere hint of a nipple! Now I don’t mind if you slaughter the bitches, but what ever happened to a little striptease before the big kill? At least Cabin Fever had a gratuitous bathtub scene. And a sense of fun.