As one of many unassuming young lads inhabiting the Emerald Isle at the turn of the last century, Conal Cochran dreamed of America. While Conals dear papa spent most of his few semi-conscious hours submerged in the nuances of the local poteen, his mother endlessly berated the family with rambling folklore and only the most humorless of Catholic traditions. He hungered for more. For him, a life of simple farming, punctuated by the associated horrors of rural life during the period, was a destiny to be studiously avoided. One typically Irish afternoon  damp, dire, and dripping with desperation  he wandered away from his crippling homestead to start anew. He would be, in the parlance of a faith he knew all too well, born again.

And, like so many whose idealized image of America far outweighed the often brutal reality, he would be tested, though not so much that the dream would ever truly be deferred. America was the land of opportunity. A nation of immigrants. A home not only of the brave, but the only such place to realize time-tested ambitions. And while he would never again see the parents who gave him life, he would, ultimately, honor their memory with the boldest blast of madness yet seen; a reimagining of the very essence of humanity itself. He was a Cochran, yes, but also the most daring of visionaries. His was a life to leave fellow countrymen like Joe Kennedy gasping for relevance. Poetry so rich as to reduce Yeats to the scribblings of an amateur. A siren song to rouse the blessed ancestors from their very graves. 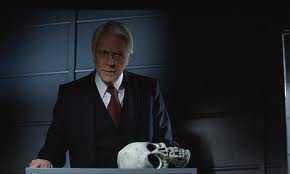 Not much is known of his early life in the new world, but after what appears to be little by way of sturm und drang, Cochran emerged, almost as if by the will of the gods, in the sleepy California town of Santa Mira. It was, appropriately enough, a humble farming village, plowed and plundered alike by similarly self-assured Micks, but the land cried out for more. Who, after all, dared scrape and sacrifice on a journey of reinvention, only to replicate the motherland? Fields must yield to concrete, rows of vegetables to towering steel and glimmering glass. There would be factories. Industry! Jobs for a new generation of Irishmen, far from the woe still festering across the Atlantic. With little money down, but an outsized helping of gall, Cochran would revolutionize Santa Mira as he had his own life, stopping for nothing and no one.

As we know, the cinema has little use for the businessman, often reducing him to a crude stereotype that minimizes effort in favor of a presumed sense of self-loathing. From Mr. Potter to Gordon Gekko, giants of commerce are usually seen as predatory sociopaths, inflicting great pain on an inferior, unsuspecting public to serve their own interests above a perceived social good. Prior assessments, sadly, have also saddled Cochran with this infamous label, but not once has moral sanctimony paused to ask the only relevant question concerning such men: what of their practical contributions? Santa Mira, once dirt and grime and leaky migrant shack, threw off the shackles of mediocrity to await its date with a triumphant modernity. As the morning whistle blew, thousands donned hard hat and lunch pail alike to punch the clock of middle class success.

Before Cochran, a day of labor was hard, indifferent, and without purpose. In his wake, homes  purchased, I might add, by men and women not used to owning anything – were filled with the sounds of well-fed, apple-cheeked children in the full flush of the American Dream. College funds were established, car loans greedily signed, and modern conveniences, once luxurious, quickly became commonplace and trite. Above all, though, Cochran established a family. No mere company town, Santa Mira was a hamlet with personality: charming, quaint, and old-fashioned, yes, but one buzzing with innovation and commercial drive. Soon, none of it felt like work at all, but simply a convening of the like-minded to laugh, cry, and produce as a single, harmonious unit. What they did, they did out of love. 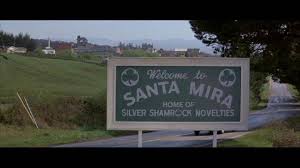 But history deems Cochran a monster. Were you there, at the ribbon cutting, when Cochran said hed never let his people down? And when Cochran, for the children, mind you, installed cameras throughout the citys streets? Safety above all, with an ability to walk after dark without fear. Sure, there was a 6pm curfew, but how else to encourage more family time? Behind those curtains sat a people at peace; playing games, eating heartily, and resting comfortably until the next days labor beckoned. Santa Miras clean, orderly sidewalks reflected Cochrans ultimate philosophy of self-respect, self-discipline, and working towards a larger goal. For decades, this held fast throughout the blossoming town. Even as it changed, it never wavered in its ultimate devotion.

Devotion? Its what set Silver Shamrock Novelties apart from the competition. And it took a personal touch, for how else to convince an ever-changing, increasingly sophisticated public to eschew popular trends in favor of the tried and true? While they were buying the latest pop culture iconography with which to dress their children, we stuck to the meat and potatoes of the Halloween season: witches, skeletons, and jack olanterns. Simple and clean, like the American spirit. Three masks, nothing more, with the green, white, and orange colors of the Irish flag for the faithful. Ah, Halloween. One mere day on the calendar, but a way of life for Cochran and his beloved Silver Shamrock. A 24/7, 365-day operation for a few hours of candy collection. A corporation built for joy, like a sand castle in the sky. 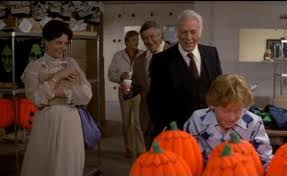 And yes, it turned. Some say Cochran lost his way, perhaps his marbles. Fattened the land with profit and full employment, only to sacrifice it all on a whim of the ancients. At least thats the version that made the papers. Crazy old coot, crippled by darkness; seduced by a soulless quest. Some say it all happened the day the suits came to town. They never slept, some said. Hell, not a blink or smile amongst them. And where did they reside? Nothing but roaming, watching us all as if in a mad dance with the cameras. Still, not a job was lost. Rather than replacing the townsfolk, they worked alongside, not seeming to do much, but god love their tireless wanderings. Cochran reassured, soothed. Strong as bulls, they could lift three boxes for the average mans one, and they didnt require a coffee break. Output quadrupled. The money kept coming in and going out. Everyone, the saying goes, getting well.

Business titans, however, weve seen. And familiarity has bred contempt. Got to be a cut above, and Cochran was that in spades. He thought big, acted bigger, and had the stones to take it all public. Would such a man really live throughout the ages had the legacy been nothing more than cheap plastic, lovingly rendered? There had to be a second act, and Cochran had a doozy. Its here where he lost the masses, but gained a following. Select, yes, perhaps cultish, but who else has ever failed so spectacularly? As we know, there were Halloweens to come, so Cochran ended his days a mere CEO. He wanted the title of mass murderer. Hell, bigger than Stalin. All for the price of a few masks. But, like a fellow peddler cut from a slightly less sinister cloth,  nobody dost blame this man. Only hes even more way out there in the blue, still dreaming, not caring if they smile back. 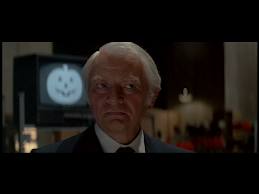 And maybe thats it. Cochran did, it seems, stop caring about Silver Shamrock. It started as a towns hope, only to end in disaster. By then, it was Cochrans vehicle, no longer the rock of the community. And those dreams, channeling Oppenheimers eyeful of oblivion, had too become death, destroyer of worlds. From the assembly line to the eradication of childhood. Millions would die. The world would, in Cochrans phrase, change tonight. He continues: In the end, we dont decide these things. The planets do. Theyre in alignment, and its time again. A modern man with a tip of the cap to the past. Machines and androids and scientists, all in service of a most ancient superstition. And who, save the mad, would dare challenge the sort who could deliver Stonehenge from its English perch? Not a replica, no sir, but the Stonehenge. The Cochran way.

Perhaps the Halloween-inspired urban legends of razor blade-filled apples and poisoned Snickers bars stem from Cochrans failed plot. If a man once existed who wanted to snuff out the kiddies en masse, surely others would seek to start slow, a few of the buggers at a time. Only no one has again flirted with such primrose paths. Cochrans still big, and its the ambitions that got small. From what soil now beneath us will such a soul spring that dares spend a half-century in service of a moments bliss? A delayed gratification on par with a Herculean stoicism. An empire not for self, but in service. Absent his desire to transform Americas children into a mushy, snake and cockroach stew, Cochrans boyhood home would be a national shrine. It would have been epic. A 9/11 with a thousand additional targets. A holocaust to redefine the very term. All lost, but for a nosy, alcoholic doctor.

But we had become soft. The Festival of Samhain now reduced to begging for sugary injections. One really cant fault the crusty Irish soul, an old country gentleman forced to endure a youthful backtalk that once would have been grounds for an extended beating. Now the dead stand aghast. How will they be sated, to set the earth back on its proper course? Yes, the hills will again run red with the blood of animals and children. It is, Cochran reasons, a part of our world. Sure, its hard to generate much enthusiasm for anyone who insists wed be better off for adopting the ways and means of a time 3,000 years behind us, but we all love the man left standing on principle. Motivations and meaning dont really matter. Cochran went to the mat. Never pausing for sentimentality or conscience, he was willing to go all the way. A man in opposition to half-measures. Not crazy, but committed. An inheritor of rarified air. The misunderstood.